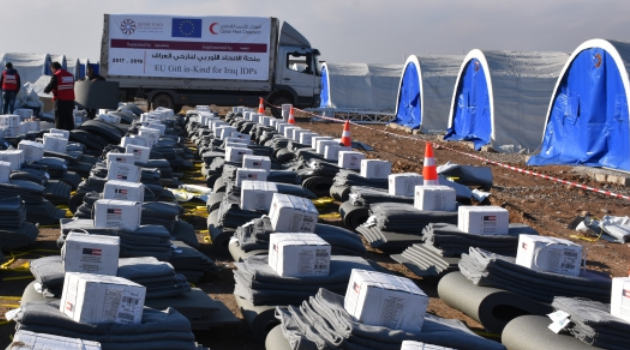 By Editor on 13th January 2017 in Healthcare, Security

The European Commission is currently working alongside EU Member States to facilitate emergency aid deliveries in Iraq, to help people affected by the crisis in Mosul.

Three additional planes carrying emergency assistance from Austria and France have now touched ground in Iraq, bringing the total number of flights facilitated and co-financed by the Commission to nine.

To date, Austria, Germany, Denmark, Finland, France, Sweden as well as Norway have offered over 266 tonnes (1636 cubic metres) of relief assistance through the EU's Civil Protection Mechanism to assist civilians displaced due to the Mosul military operations.

"The EU's aid operations in Iraq have now delivered urgently needed material such as tents, blankets, generators, hygiene articles, five tonnes of medicine and medical equipment. Let me thank all countries who have channelled support through the EU's Civil Protection Mechanism.

"This aid can make a real difference for civilians trapped inside Mosul and other locations affected by the conflict and those displaced by the fighting who are facing extremely dire conditions.  It is crucial to ensure the protection of all civilians and the respect of International Humanitarian Law during and after the conduct of hostilities."

Winterisation support and emergency trauma care are key priorities. Additional material will be shipped to Iraq in the coming weeks. The material assistance complements the EU's humanitarian aid to Iraq, the sum of which is over €159 million in 2016 alone.

In December 2016, a cargo plane carrying close to 40 tonnes (more than 290 cubic metres) of emergency supplies landed in Erbil, Iraq, in the first of several operations organised jointly by the European Commission and Member States.