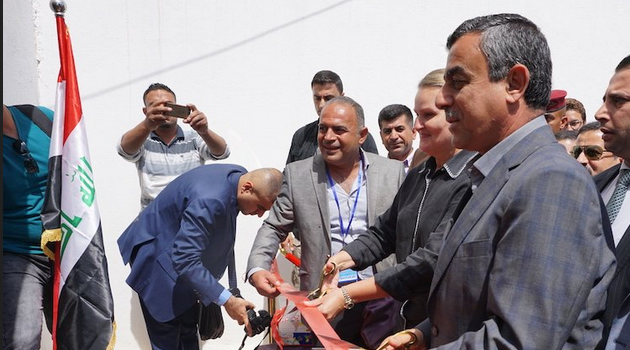 By Editor on 12th May 2017 in Construction & Engineering In Iraq, Security

The Government of Iraq and UNDP’s Funding Facility for Stabilization (FFS) re-opened the As-Salamiyah Water Treatment Plant at a ceremony yesterday in Nimrud.

The Treatment Plant, which will provide safe drinking water for hundreds of thousands of people in the Ninewah Plains, is one of the first major stabilization projects to be completed since the Government approved 202 projects in early April.

Almost all of the plant’s equipment, including 19 water pumps, filters and retaining pools, have been replaced or rebuilt and the main electric transmission line between As-Salamiyah and Hamdaniyah has been repaired.

“When the treatment plant wasn’t working all of the water that came from the pipes, if it came at all, was filthy. We had to go to the river to get water, and even that was barely suitable for washing. The water is much better now. We can even drink from the taps.”

At a ceremony marking the re-opening of the water treatment plant on Sunday, Secretary General of the Council of Ministers, Dr. Mahdi Al-Alaq, said:

“We are doing everything we can to help liberated areas rebuild after the destruction caused by terrorist Daesh. Providing basic services, such as clean water, is key to ensuring that displaced Iraqis can return home with dignity.”

“The Funding Facility for Stabilization is implementing more than 300 projects in eastern Mosul and liberated cities and districts in the Ninewah Plains. We’re working as quickly as possible to re-establish water and sewage systems and electrical grids. Thousands of people, many from destitute families, are working on public schemes, earning income while they help to rebuild their communities.

“A lot needs to be done and we have promised the government and the people of Mosul that we will do everything possible to speed-up stabilization.”

Established in June 2015, FFS is working in newly liberated areas in Anbar, Salah al-Din, Ninewah and Diyala Governorates. More than 800 projects are completed or being implemented across 22 locations. Since the start of the crisis, over 1.7 million people have returned to their homes.