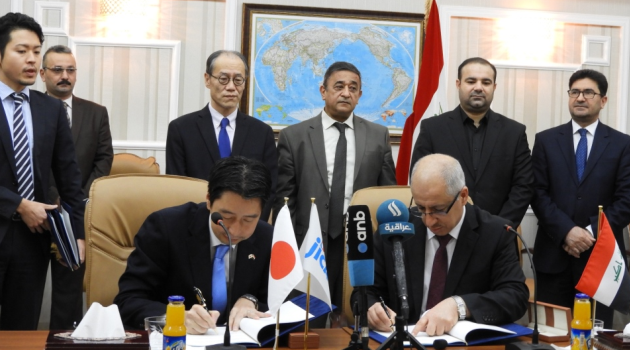 The Japan International Cooperation Agency (JICA) and the Iraqi Government have signed two loan agreements at Ministry of Finance in Baghdad.

The loan agreements were signed by Dr. Maher Hammad Johan, Acting Deputy Minister of Finance and Yuho Hayakawa, Chief Representative of JICA Iraq Office, in the presence of H.E. Mr. Fumio Iwai, Japanese Ambassador to Iraq.  These concessional ODA loans aim to support the Government of Iraq and Iraqi people in efforts to reconstruct the country with significant challenges.

The first loan, amounting to JPY 27,220 million (approx. USD 239 million), is used for the Electricity Sector Reconstruction Project (Phase 3).  The Ministry of Electricity implements the project which reconstructs and develops fixed and mobile substations in conflict-affected Anbar as well as Baghdad and surrounding areas.  The project is expected to contribute to restoration and stabilization of electricity supply to millions of people in conflict-affected areas.  Prior to this Phase 3 project, JICA is already funding preceding Phase 1 and Phase 2 projects in various governorates.

The second loan, Fiscal Reform Development Policy Loan (II) amounting to JPY 30,000 million (approx. USD 263 million), supports the budget of the Government of Iraq with urgent needs for enormous financial resources.  It aims to promote on-going administrative and financial reforms of the Government through (i) expenditure rationalization, (ii) energy efficiency and (iii) transparency and governance of state-owned enterprises.  This is a part of phased co-financing supports with the World Bank and other partners since 2016.  The previous phase of this loan, of which amount is JPY 25,000 million (approx. USD 219 million), was already fully disbursed in June 2016.  JICA is also implementing technical cooperation for strengthening debt management capacity of the Iraqi government officials, which is required under the reform program.

Both loans are very concessional with the interest rate of JPY LIBOR+0.05% and the repayment period of 15 years including 5-year grace period.

JICA is a development assistance agency under Japanese Government and provides financial and technical cooperation for developing countries.  Since 2003, it has provided assistances for Iraq through ODA loans which amount to JPY 683 billion (equivalent to USD 6.0 billion) and technical cooperation including training programs in which more than 8,000 Iraqi officials have participated. JICA supports Iraq’s efforts for urgent reconstruction, stabilization of people’s daily lives and sustained socio-economic development of the country.

One Response to Japan Lends $502m to Iraq for Development