By Editor on 5th February 2020 in Ahmed Tabaqchali, Investment

The year for Iraq, and its equity market, started with two momentous events that raised the feared spectre of a US-Iran proxy war fought in the country and all of the instability that would come with it.

In quick succession, the US’s assassination in Baghdad of Iran’s top general was followed by the Iranian missile attacks on Iraqi military bases housing US military units. Initially the market shrugged them off, discounting the possibility of military conflict as unlikely, but by January’s end the market, as measured by the Rabee Securities RSISX USD Index (RSISUSD), was down –4.7%.

However, this decline masks two contradictory trends. The first of which was heavy selling in foreign favoured stocks, such as Baghdad Soft Drinks (IBSD), Asiacell (TASC), Bank of Baghdad (BBOB) and Mansour Bank (BMNS). This was most likely foreign selling, by either Iraq-focused equity funds or most probably by frontier market funds with small weights in Iraq, likely over concerns of potential political instability following the two momentous events.

These stocks were down between - 3% to - 10%. This trend was contrasted by heavy buying in local favoured small cap cyclical stocks that had a stunning rally by early January, but which cooled off by month end as foreign selling in IBSD, TASC, BBOB and BMNS picked up steam. But this was not before posting solid month end gains on the back of strong performances in 2019 as discussed in December 2019. Certain stocks in particular had impressive performances during the month as shown in the table below (figures rounded):

These conflicting trends are in-line with the 2019 themes as discussed in the “2019 Market Review and 2020 Outlook” in which the market’s bottoming action was seen through its improved dynamics throughout 2019. The first improved dynamic was its discriminating nature – in that negative developments in certain stocks were confined to these stocks and did not spread to others in the sector or to the overall market. While, the second improved market dynamic was the broadening of breadth, and in particular, the market’s focus on the hopes of an earnings recovery for some of the industrial stocks even before any signs of such recovery can be detected in their earnings reports during 2019.

The fears that prompted the heavy foreign selling might be justified on the grounds of instability arising from the current political chaos in Iraq and the spill-over effects of these on the Iraqi economy. The countrywide demonstrations continue unabated in the face of unprecedented violent state crackdowns, however, this youth-led protest movement continues to shape events in the country. Since October these ranged from forcing the political elite to implement reforms that would threaten their interests, to its influence on the choice of the current prime minister designate replacing the forced out prime minister. The prime minister designate faces considerable challenges in the short time that will require him to produce changes, satisfying the protest movement’s demands for change, while preserving the status quo for the political elite. In addition to balancing the conflicting demands of the protest movement and the political elite, he would need to navigate any potential re-escalation of tensions between the United States and Iran.

Yet, as these events are being played out, their effects – real and feared – can be seen in the action in the exchange rate of the Iraqi Dinar (IQD) vs the USD. The market price of the USD versus the IQD by month end returned to levels that prevailed over the last 20 months after spiking higher following the events at the start of the year. This is highlighted in the chart below. 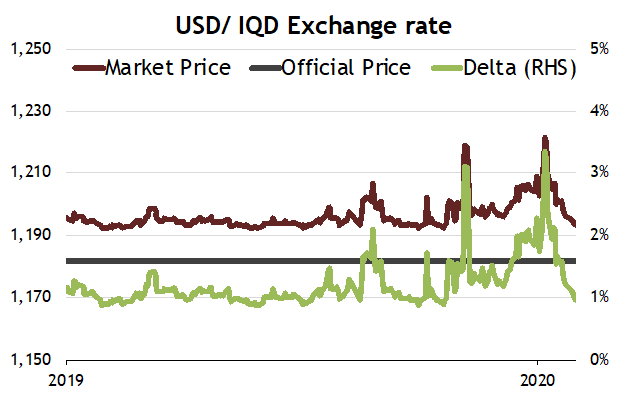 Such spikes have happened before, during periods of geopolitical crisis in the summer of 2019 which included the tanker hits and the attacks on Saudi oil installations; and during local political crises such as the elections in May 2018, and more recently the nationwide demonstrations that started in October 2019. The current spike was probably a response to sharply increased local demands for physical USD notes as flight to safety prompted this demand. Cash transactions dominate activity in the local retail and trade markets where the IQD-USD exchange rate for physical USD notes trades at a slight premium to the market price (in red) in the above chart. This premium widened during the spikes in the market rate for USD but settled down to about an 8% premium versus the usual 2 - 4% premium. This wider premium likely reflects local traders’ hoarding of physical USD notes in preparation of a possible future, real or imagined, shortage – but these fears have moderated significantly from the start of the year.

While the FX market is suggesting that the disruptions to economic activity have subsided, other data is needed for a full evaluation of their effects. The first of this data would be broad money or M2, as a proxy for economic activity due to its sensitivity to oil revenues (chart below), in which the most recent data from the Central Bank of Iraq (CBI) indicate continued growth. 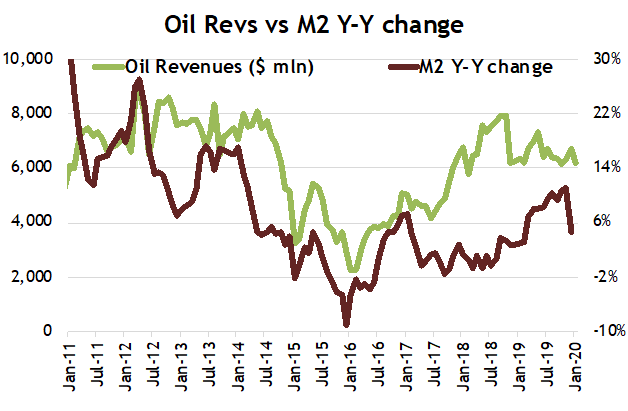 Actual M2 data as of October shows robust growth with a year-over-year increase of +10.7%, while estimates show a moderation of year-over-year growth in December to less than half of that. However, it should be noted that December estimates are based on preliminary data on the deposit component of the monetary base M0 as of mid-January. These in turn show a decline from earlier figures, but there are not enough data to suggest if it’s the start of a declining trend or a normal seasonal decline. Combining the declining deposit component of M0 with the spike in the market exchange rate of the USD might be interpreted as capital flight. Yet the exchange rate as end of January suggests that it was a short-lived phenomenon. A more likely explanation than capital flight is the disruptions to economic activity, and in particular to the cash-dominated retail and trade markets, led to a decline in deposit formation as cash was used to fund operations.