By Editor on 7th January 2020 in Ahmed Tabaqchali, Investment

Stop the Press: Just as this article was being readied for publication, the news came of a US strike in Baghdad that targeted a car carrying Iran’s top general and a senior commander of Iraq’s Paramilitarily Units (PMU). The attack raised the often-discussed spectre of a US-Iran proxy war fought in Iraq. While this is a real possibility, and events are extremely fluid, there a few points that should be taken into account amidst the breathless media coverage:

While these events are being played out, it’s worthwhile to look at the Iraq investment story purely on its own merit, especially as the stock market was up +1.5% for the year as of Tuesday 7th January and was building on the trends discussed below. Crucially the market price of the US versus the Iraqi Dinar has only moved up by about +2.0% above the levels for most of the last 20 months. After stabilising in early 2018, It has traded briefly at current elevated levels before the elections in May 2018, during the tanker hits during the summer, and finally, the recent attacks on Saudi oil installations. 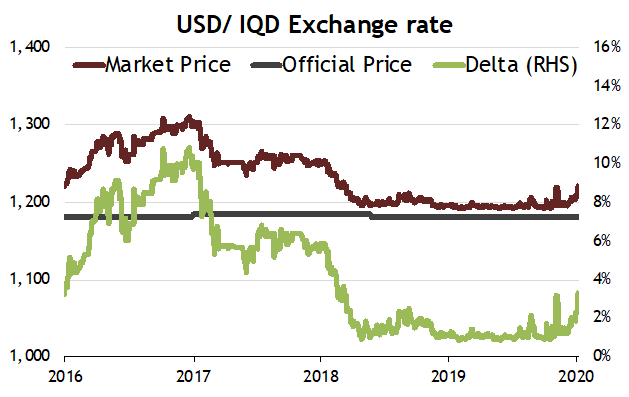 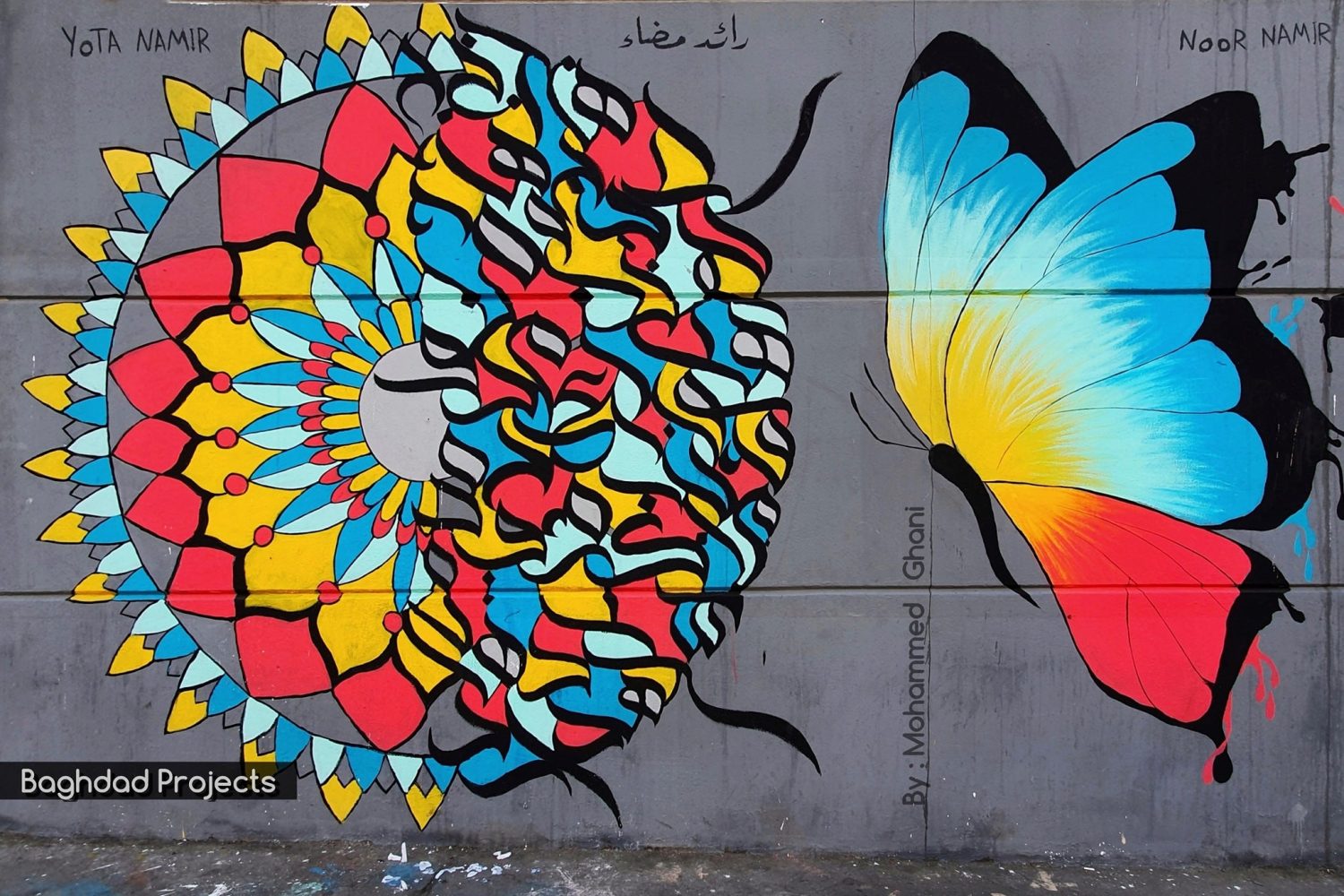 The first of the market’s improved dynamics is its discriminating nature in evidence throughout the bank rally that started in May 2019, which at the time was led by a stunning rise in Iraq’s leading bank, the Bank of Baghdad (BBOB), which was  up +62.5% in May on hopes it would resume dividend payments for the year. These expectations led to other leading banks such as the National Bank of Iraq (BNOI), Mansour Bank (BMNS) and Commercial Bank of Iraq (BCOI) to join the rally. Subsequently, BBOB’s quarterly earnings results confirmed expectations that it is following through with the recovery in its fortunes that began in 2018 as part of the overall conditions in place for the sector’s future revival. Nevertheless, BBOB did not resume dividend payments for 2018’s earnings. However, unlike in prior years, BBOB declined from the May 2019 peak, yet did not lose all the gains– and more importantly while it pulled the other leading banks up with it in May, it did not drag them lower in the following months. By year end all of the leading banks were meaningfully higher than their pre-May rally lows. 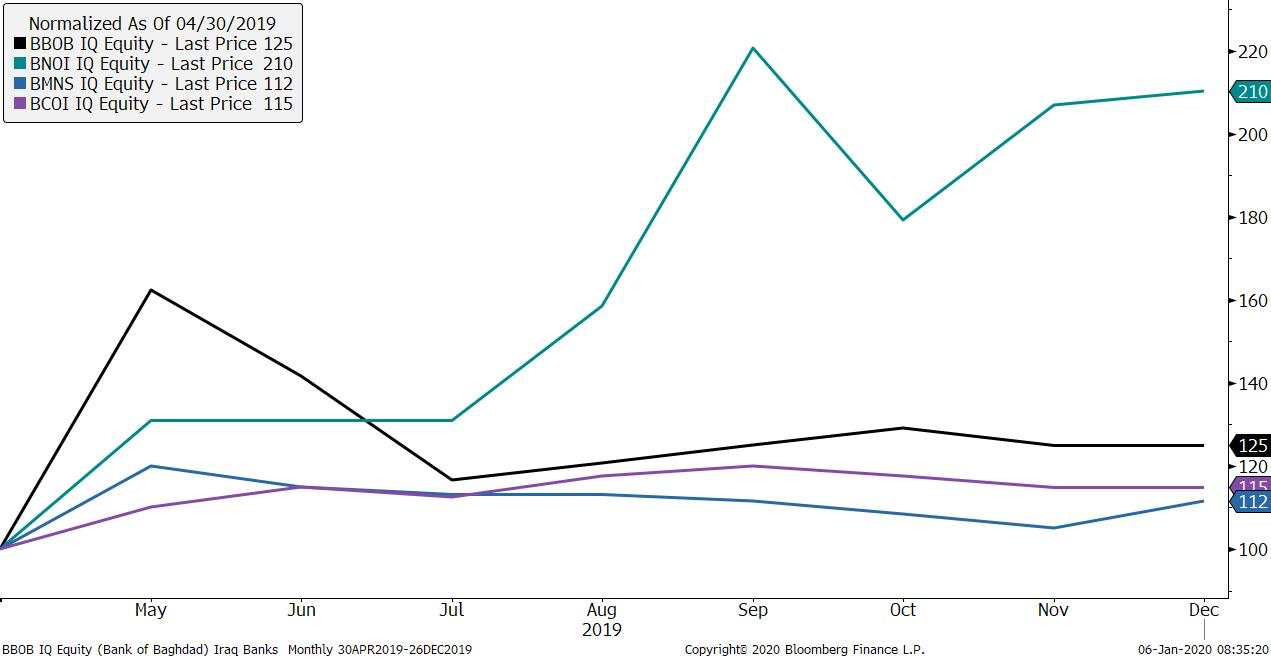 The second aspect of the improved market dynamics is the broadening of breadth and the market’s focus on the hopes of an earnings recovery for some of the industrial stocks even before any signs of such recovery can be detected in their earnings report during 2019. This dynamic was evident in small industrial companies and in healthcare providers classified under the industrial sector on the Iraq Stock Exchange (ISX), as discussed here in the last few months. The chart below shows the price action of Al-Mansour Pharmaceuticals Industries (IMAP), Al-Kindi of Veterinary Vaccines Drugs (IKLV), National Chemical & Plastic (INCP), and Metallic & Bicycles Industries (IMIB). 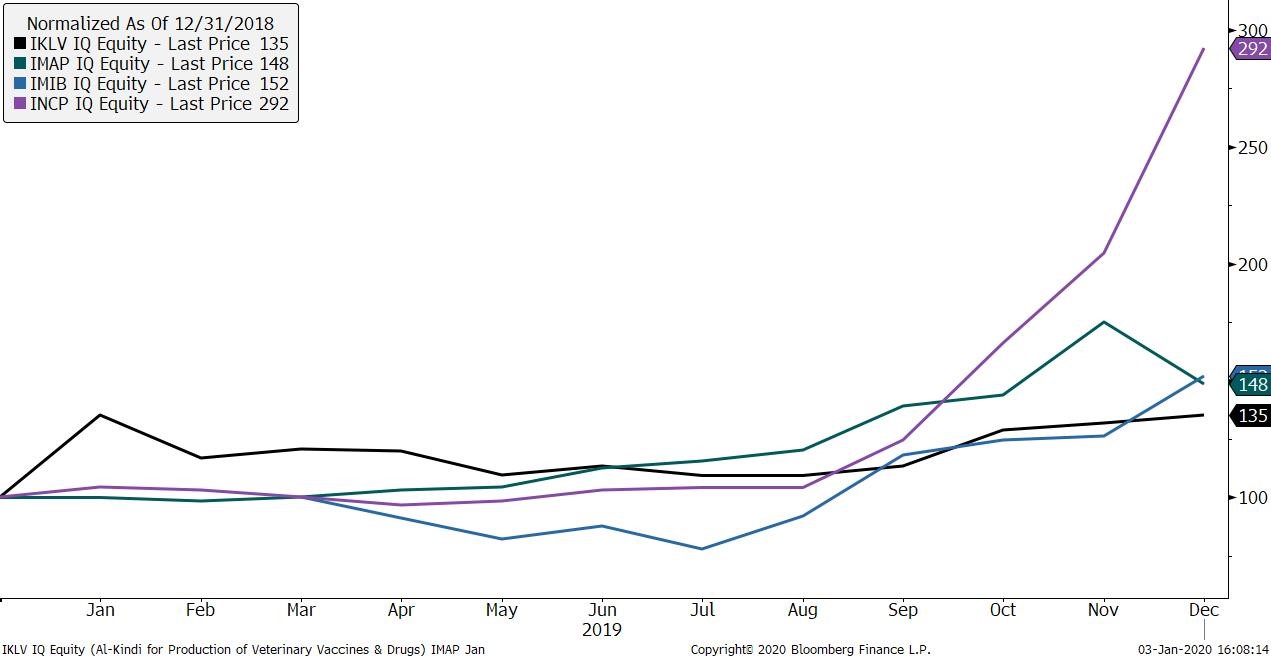 Normally, cyclical stocks outperform defensive or growth stocks at the start of economic recoveries even though their earnings do not support this outperformance – at least initially. It can be argued that similar dynamics are taking place through the action of cyclicals on the ISX in 2019 such as the banks, mentioned earlier, versus those of market stalwart growth stocks – Pepsi bottler Baghdad Soft Drinks (IBSD) which was down –8% for the year, or for mobile telecom operator Asiacell (TASC) which straddles the cyclical and defensive sectors due to the specifics of its earnings drivers since 2014, which was up +12% in 2019. In contrast, in 2018 both were up +34% and +47% respectively, but the banks were down, such as BBOB –52%, BMNS ­–20%, BNOI –28%, BCOI –4%. Even though the analysis of cyclicals versus growth stocks can only go so far on the ISX, given its illiquidity and limited diversification, the logic of an economic recovery driving cyclical earnings is applicable.

This economic recovery was initially driven by the revival in government spending on goods and services and on wages, the evidence of which was seen in: (1) the upturn of the country’s exports and in new vehicle sales as reported here in October, and (2) the continued growth of broad money, or M2, as a proxy for economic activity as reported here in December. 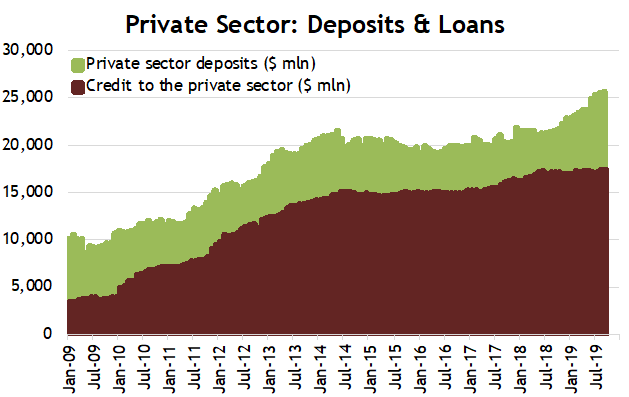 Drilling down to the company level within the commercial banking sector, the earnings profile of the National Bank of Iraq (BNOI) for the first nine months of 2019 (9M/2019) demonstrates the above macro trends. For BNOI private sector deposits were up +54% in 9M/2019, while credit to the private sector was up +116% for the same period. Its pre-tax earnings for 9M/2019 hold promise for strong full year earnings – a long way to go before recovering to pre-crises levels– but supporting management’s bullish expectations for the year. While it’s not possible to extrapolate much from these results, or to generalize for the sector as a whole from them, they support in any case the argument that the conditions are in place for the sector’s recovery in 2020.

The macro and the micro trends discussed so far are affected by the youth protest movement that dominated all events in Iraq from the 25th of October 2019 after the initial wave of protests in early October. The protest movement forced the political elite to implement reforms that would threaten their interests – contrary to earlier expectations of the opposite. Parliament approved electoral reforms that if made into law would be a meaningful departure from the prior ones that largely allowed the political elite to maintain their oversized influence on successive government formations.

If the hoped-for early elections in 2020 are to be conducted under these electoral reforms they will most likely lead to the formation of the next government with a majority in parliament and parliamentary opposition, as opposed to the case since 2003 in which successive governments were composed of all parties in parliament. This was the root cause of the failures of the past to implement the reconstruction of the country, as each party pursued its own program within its own sphere of influence within an all-inclusive government.

These developments have yet to be played out and a lot of uncertainties remain, yet the near-term effect on the economy would be that the current caretaker government, while unable to act on capital spending plans, will follow up with implementing the current spending element of the 2019 expansionary budget. Moreover, it will continue to implement this budget in 2020 through the upcoming months of pre-election manoeuvring, elections, and post-election government formation. The government has plenty of firepower to fund this spending in the form of a 33-month cumulative surplus of about USD 28.9 bln that will increase in a firmer oil price environment. The most important consequence of this is the sustainable continuation of the consumer led economic recovery discussed in earlier paragraphs. 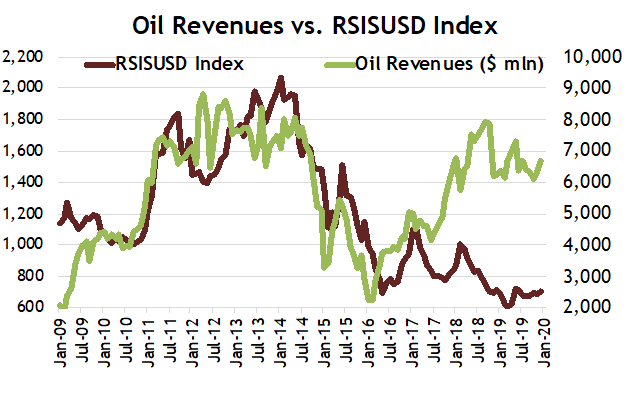 The stock market continues to look through the political developments to the upcoming economic recovery, and while it’s in the early process of forming a base it is worthwhile to point out its continued divergence from its past close relationship with oil revenues (a proxy for the forces driving the economy). This divergence is still at the widest it has been for the last few years and it is showing tentative signs of narrowing this divergence as the above chart shows.

For further reading, here are some interesting, relevant news links related to Iraq: