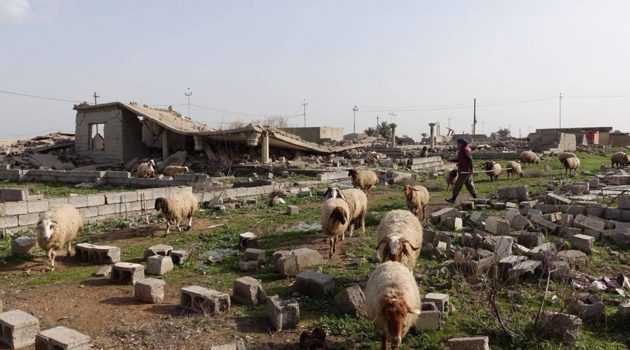 By Editor on 18th April 2020 in Iraq Public Works News

Debris-recycling initiative seeks to bolster return of displaced in Iraq, amidst growing risks of COVID-19 outbreak

With support from the Government of Japan, the UN Environment Programme (UNEP) is joining forces with the International Organization for Migration (IOM) to launch an innovative debris-recycling project that will help displaced persons in Kirkuk Governorate, northern Iraq, return to their homes.

"With almost 10,000 destroyed houses in Kirkuk Governorate, our priority is to enable [displaced persons] to return and rebuild their demolished homes," said Ali Humadi, Kirkuk's Assistant Governor for Technical Affairs.

The plight of the approximately 1.4 million Internally Displaced Persons (IDPs) in Iraq has taken on a new urgency, as they are widely recognized to be some of the most vulnerable communities to the novel coronavirus pandemic.

"The impact of the epidemic is exacerbated by the conditions in which the displaced live," said Dr. Jassim Hamadi, Deputy Health and Environment Minister. "Their cramped living circumstances, both in formal camps and densely populated informal settlements, and difficulty in accessing basic services - especially healthcare - makes them extremely vulnerable to the spread of the virus."

Emphasizing that "the presence of huge volumes of debris on peoples' properties is the main obstacle preventing the return of at least 80 per cent of cases", Ali Humadi welcomed sustainable solutions to the debris problem and the redoubling of efforts to facilitate returns given the ongoing public health emergency.

Kirkuk authorities estimate that from 2014 to 2017, around 8-9 million tonnes of debris were created during the conflict with so-called Islamic State of Iraq and the Levant. Around two-thirds of this debris consists of concrete, blocks and stones that can be recycled, while the rest is mudbricks. A major challenge in handling this debris stems from the potential presence of unexploded ordnance.

Meanwhile, life is slowly picking-up in some of Kirkuk's 135 destroyed villages. "It's a citizen-led effort," said Ibrahim Khalaf, a prominent community member from Buwaiter, a village that was razed to the ground in June 2015.

Buwaiter is one of many villages along the front lines separating militants from the so-called Islamic State in Iraq and the Levant (ISIL) in southern Kirkuk from Kurdish Peshmerga forces in the north. This large belt of land, that stretches over 65 kilometres and divides Kirkuk Governorate in half, was until recently a no man's land emptied of its inhabitants as entire villages were levelled flat.

"People are trying to do what they can to rebuild their homes with their meager resources," Khalaf said. He further asserted that "that just removing the debris from one house can cost around 2.5 million Iraqi dinars (USD 2,000)." This amount is well beyond the means of many families affected by the conflict, and around half of Buwaiter's nearly 1,000 inhabitants are unable to return as a result.

IOM Iraq estimates that there are still around 60,000 IDPs in Kirkuk.

"The most important thing now is to clear all this debris, and if possible, help people reconstruct their homes," Khalaf noted.

"We are at a loss for what to do with all this debris," said Hassan Nassif, the head of Multaqa sub-district whose 35 villages, including Buwaiter, were wiped out during the conflict. He went on to decry "the chaotic dumping of debris in seasonal wadis and despoiling of agricultural land, which will surely create problems for the future".

By practically demonstrating the potential for debris recycling through this pilot project, UNEP aims to apply a circular vision to the debris problem, transforming it into part of the solution in partnership with IOM. This includes not only facilitating safe returns, but also generating livelihood opportunities through Cash for Work activities, carrying out more cost-effective reconstruction by reusing crushed rubble, and better environmental management.

The project is being implemented in close collaboration with the Kirkuk authorities and the Ministry of Health and Environment, and benefits from valuable facilitation support from the United Nations Assistance Mission for Iraq (UNAMI).

"Crushing the rubble is a pragmatic and straightforward answer, offering a ray of hope in dealing with our massive challenges, including creating jobs for displaced youth," Nassif added. "We stand ready to support this initiative and look forward to expanding this recycling approach in Multaqa and Kirkuk."

H.E. Hashimoto Naofumi, Ambassador of Japan to Iraq, said: , "Japan has recently decided to provide a new assistance package for Iraq amounting to USD 41 million including this project as assistance for debris recycling in Kirkuk Governorate.
With this package, the total amount of Japan's assistance to the people affected by the crisis reaches USD 540 million since 2014".

He went on to say, "Japan is pleased to invest in addressing this overlooked debris problem and support a sustainable return process that integrates the humanitarian, reconstruction and environmental angles of the question."

As part of this one-year project, which starts this month, UNEP also plans to work closely with Kirkuk Governorate's recently created Debris Working Group and the Environment Ministry to strengthen their capacity to develop and apply optimal debris management plans.