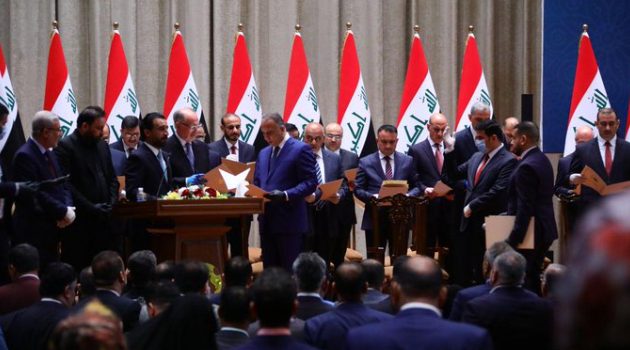 Iraq's Council of Representatives (Parliament) on Thursday approved fifteen candidates nominated by Prime Minister  Mustafa Al-Kadhimi for membership of the Council of Ministers (the Cabinet).

Reuters reports that voting on the oil and foreign ministries was delayed as the parties failed to agree on candidates.

The parliament rejected Kadhimi's picks for justice, agriculture and trade; and, according to Xinhua, also rejected his nominees for culture and migration.

Members of the new Iraqi Cabinet are:

Prime Minister Al-Kadhimi will submit to Parliament nominees for other Cabinet posts at a later date.

During the parliamentary session in Baghdad, the Prime Minister told MPs that the new government will create a consultative framework that brings together all blocs, parties, women organisations, the protest movement, professional bodies and trade unions so that together, Iraqis can overcome current crises and challenges.

A new programme for government

The Prime Minister also set out the key priorities of his government which include mobilising all resources to combat the coronavirus pandemic, preparing for early elections, submitting a special draft budget law to address the economic crisis, ending internal displacement in Iraq and protecting the country's sovereignty and security.

Prime Minister Al-Kadhimi called on all Iraqis to work together, saying that the challenges facing Iraq are great, but they are not greater than our ability to address them.

Click here for details of the Iraqi government programme.