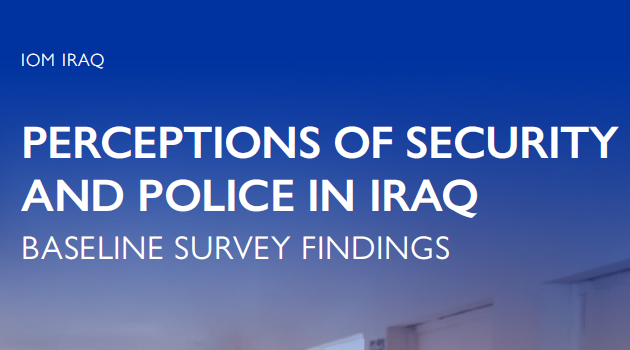 Perceptions of Police, Security and Governance in Iraq: IOM Study

The International Organization for Migration (IOM) and Yale Law School's Center for Global Legal Challenges (GLC) are releasing a new report that evaluates community perceptions of police and security in three communities across Iraq.

This new study - Perceptions of Police, Security and Governance in Iraq - presents evidence from an assessment of IOM Iraq's 'Community Policing' Programme, implemented alongside the Government of Iraq Ministry of Interior.

The study is based on data from two waves of surveys conducted in three communities where the programme was implemented in 2019: Baradiyah (Basra Governorate), Hamdaniyah (Ninewa Governorate), and Jubeil (Anbar Governorate).

Community policing (CP) is a method of law enforcement defined by the United Nations as "a strategy for encouraging the public to act as partners with the police in preventing and managing crime as well as other aspects of security and order based on the needs of the community."

Surveys were conducted in July and August 2019, before IOM Iraq implemented the CP programme in the three communities, and again in December 2019 after six months of programming.

"In Iraq, where waves of violence over the past four decades have eroded trust between communities and security actors, there has been very little publicly available research on efforts to re-establish this trust," said IOM Iraq Chief of Mission Gerard Waite.

"This study is a step toward establishing an evidence base to evaluate community policing methods in Iraq, that will help tailor the programme for diverse contexts across the country."

"In Iraq and around the world, public distrust of state institutions has driven unrest, instability, and support for violent non-state groups such as the Islamic State in Iraq and the Levant," said Oona Hathaway, Professor of Law and Director of the Center for Global Legal Challenges at Yale Law School.

"This study suggests that training police in the importance of human rights and equality under the law can strengthen both human security and national security."

The study also included surveys in two comparison communities - Khor Zubair, Basra and Saqlawiyah, Anbar - that were selected for geographical proximity and demographic similarity to the communities where the Community Policing Programme was implemented. Conducting baseline and endline surveys in these communities provides some insight into whether other trends and events unrelated to the CP Programme might have contributed to the changes observed over the course of the study.

The key findings of the endline study are available in infographic form:

Evaluating Perceptions of Security and Police in Iraq, the baseline report analysing data from the first wave of door-to-door surveys conducted before implementation of the CP programme, was published in April 2020.