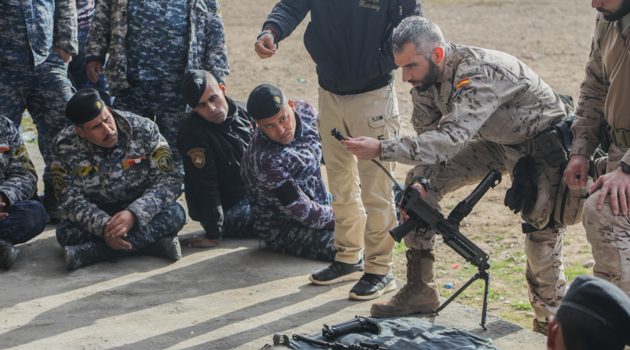 Due to Iraqi Security Forces' success in the campaign against Daesh, the Coalition is adjusting its positioning and focus in Iraq. These military movements are long-planned in coordination with the Government of Iraq.

"Today marks the seventh base this year transferred to the ISF, as part of an ongoing partnership between the Iraqi security forces and the anti-ISIS international military Coalition," said Maj. Gen. Gerald Strickland, CJTF-OIR deputy commander for strategy. "Iraqi forces trained here were critical in the liberation of Mosul three years ago. Besmayah serves as a shining example of Iraqi military capability. The Coalition has supported the development of this facility, enabling the Iraqi military to deliver forces ready to root out the remnants of Daesh."

Coalition activities at Besmayah were primarily led by Spanish forces, who trained nearly 50,000 Iraqi military personnel at the site. In conjunction with their Portuguese partners, Spain's military forces trained the ISF in a broad range of military tactics and programs. Courses quickly evolved to a "train-the-trainer" approach, with Iraqis assuming daily leadership and delivery of the programs.

The Spanish contingent transferred and divested $4 million in classrooms, barracks, weapons ranges, mock urban training sites, and other facilities to the Government of Iraq. The United States contributed $1 million in power generation and base force protection materials and equipment.

"The train-the-trainer courses were highly successful in building a sustainable future for Iraqi-led training programs," said Spanish Col. Leopoldo Ramirez, the CJTF-OIR senior national representative for Spain. "More than 5,000 Spanish soldiers served 12 rotations at this base, they can be very proud that their Iraqi partners have assumed full control and are capable of operating independently for a secure and stable future of Iraq."

CJTF-OIR will continue to relocate and consolidate personnel and equipment from Iraqi bases throughout 2020, in cooperation with the Government of Iraq. The ISF increasingly conducts independent operations in the fight against Daesh and the defense of their homeland including the 2020 series of operations "Heroes of Iraq," in which they have cleared thousands of kilometers to capture enemy fighters and equipment.

Coalition troops will depart Besmayah in the coming days. As a member of the 77-nation international Coalition, Spain firmly believes that unified, well trained Iraqi armed forces are essential to defeating Daesh, and remains committed to a long-term engagement with the Iraqi people in support of this objective.  Spain therefore remains a strong member of the Coalition, providing advisors to the Iraqi Joint Operations Command and valuable helicopter support to the Coalition.