By Editor on 12th October 2020 in Ahmed Tabaqchali

The unusually, more subdued than normal "dog days of summer" witnessed in August were extended into September as economic activity slowed further, especially as the 40-day Arbaeen pilgrimage approached its climax in early October - as can be seen from the Google mobility data in the chart below. 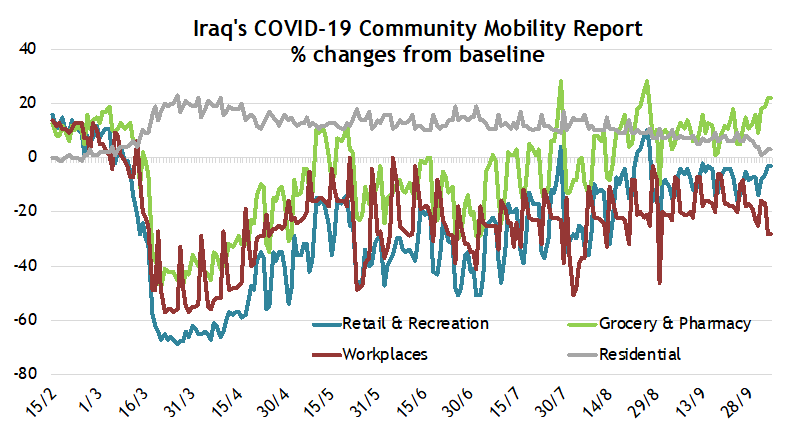 (Baseline is the median, for the corresponding day of the week, during January 3rd - February 6th,

The Arbaeen similarly affected the USD-Iraqi Dinar (IQD) transaction volumes conducted by the Central Bank of Iraq (CBI), which administers five daily USD auctions every week to facilitate foreign trade transactions (transfers, indicated as green bars in the below chart) and to satisfy the need for physical USD for Iraqis travelling abroad (cash, indicated as red bars in the below chart). Demand for USD in CBI's auctions is a reasonable proxy for consumer demand, given the country's high dependence on imports to satisfy domestic consumption of goods and services, and thus this decline confirms the slowdown implied by the mobility data. 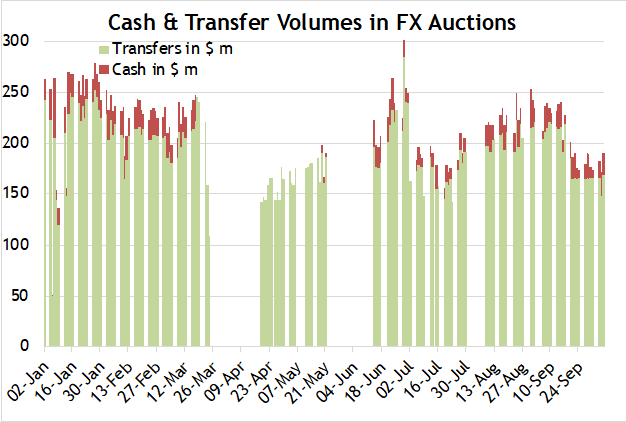 While the Arbaeen had similar effects on economic activity every year, the slowdown this year comes from a lower base than in other years. And so, the moderation of activities might be a reflection of a wider economic slowdown given the fading effects of the rebound from the lockdown-induced plunge. The economy, like other economies worldwide, is probably adjusting to a "new normal" post-COVID - that is at risk of being in a prolonged sub-par state as a second wave of the pandemic emerges worldwide, bringing with it partial lockdowns.

Nevertheless, the slowdown of economic activity in the two weeks leading up to the Arbaeen is at odds with the increase, in the same two weeks, from 2.9% to 4.1% in the premium of the market rate over the official exchange rate of the Iraqi Dinar (IQD) versus the USD (chart below). 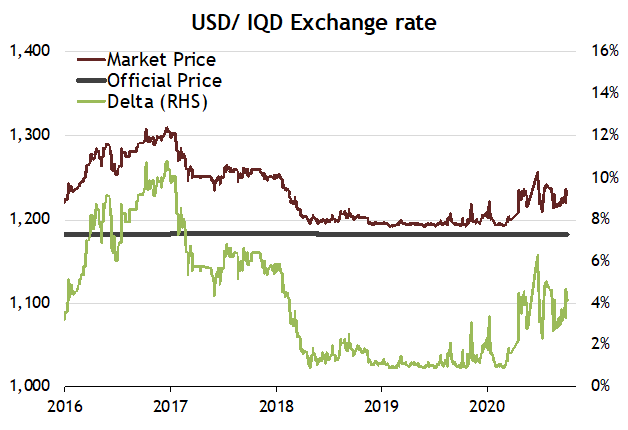 The contradiction of an increasing USD rate, while USD sales volumes are decreasing, might be explained by jitters as rumours circulate of an imminent IQD devaluation as a solution to the government's struggle to meet its most pressing expenditures that are much higher than its current oil revenues. Such rumours are routine in a country in which the dissemination of economic updates is poor, and trust in the government is very low, driving perceptions and subsequently fears. These fears notwithstanding, the 4.1% premium, while high compared to the lows that prevailed for most of 2018-2019, is lower than levels reached during the height of the lockdown when similar fears were making the rounds. More importantly, the current premium levels are substantially lower than the levels reached at the worst of the last economic crisis in late 2016 as can be seen above.

The rumours of an IQD devaluation are fuelled by the ruling political class' pursuit of a "silver bullet" solution to the country's fiscal crisis. A pursuit that is resurrected whenever oil revenues decline substantially below expenditures, such as during the current period and in 2014-2016. The appeal of the devaluation silver bullet is that a weaker exchange rate of the IQD versus the USD would enable the state to meet its IQD expenditures from its USD based oil revenues, resolving the state's fiscal crisis. However, such a respite is fleeting as prices would soon rise in lockstep with the devaluation, given the country's high dependence on imports to satisfy local consumption, and the inability of local industry to meet this demand. This in turn would raise the cost of living and lower the living standards of a large segment of the population, leading to the very social discontent that the political class is seeking to avoid.

However, a gradual depreciation of the IQD versus the USD is likely as lower future oil revenues weaken the forces supporting the current exchange rate, and the new government's reform programme gradually unfolds. It was argued in "Revisiting the Iraq Thesis, Five Years Later" that:

"The dilemma for the government is that on the one hand, the basic governing equations of Iraq's political system - which largely allowed the political elite to maintain their oversized influence on economic policies - are still in force, and as such the elite will likely derail real reforms that threaten their interests; while on the other hand the rolling economic crisis means that alternative proposed stop-gap measures will not work for long and so reforms are unavoidable in the end.

A way out is in pursuing reforms that will yield real economic dividends, yet at the same will not threaten the elite's interests. The first of these are the low hanging fruit, ignored during the years of oil aplenty, of measures that will allow the private sector to grow, supported by an unconstrained commercial banking sector and unhindered by government bureaucracy"

The private sector's growth, supported by the reform programme, will take time, measured in years not months, to grow sufficiently enough to satisfy local demand for goods and services. A more competitive exchange rate, in particular versus the country's largest trading partners, would support and accelerate this development.

The equity market, as measured by the Rabee Securities RSISX USD Index, meanwhile rose 2.9% in September, its rise was strongly influenced by the stellar performance of its largest index component, Baghdad Soft Drinks (IBSD), with an index weight of 33.5% and which was up 14.9% for the month, benefitting from the re-investment of its dividends. On the other hand, the two leading banks that drove the market higher until September corrected, with the Bank of Baghdad (BBOB) down 17.8%, and the National Bank of Iraq (BNOI) down 2.9%. Other market leaders were either flat or corrected by a few percentage points.

In spite of the market's lopsided rise for the month, this performance builds on the four-month recovery following the multi-year lows reached in April, for a total increase of 34.3% since then. However, notwithstanding this strong performance, the market is almost back to where it started the year - at the tail end of a brutal five-year bear market. The Rabee Securities RSISX USD Index (RSISUSD) is still down about 66% from the 2014 hights, which from a risk-reward perspective is attractive unlike other markets worldwide, most of which have had multi-year bull markets and would need to discount vastly different economic assumptions than those that led to their multi-year rises. 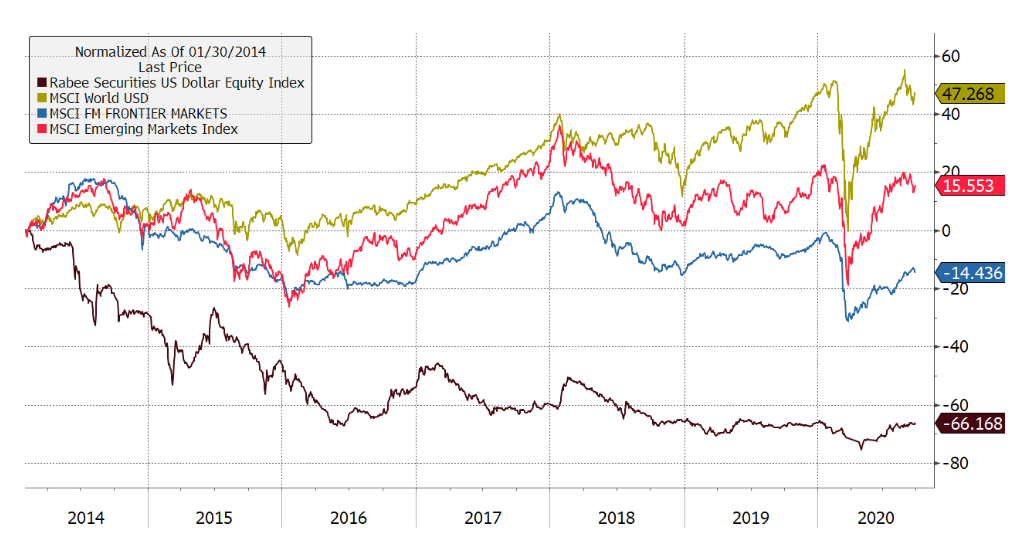