By Editor on 7th July 2020 in Ahmed Tabaqchali, Investment

June marked the five-year anniversary of the AFC Iraq Fund - conceived a year earlier amidst the perfect storm of ISIS's take-over of the city of Mosul, it threatening Iraq's break-up, and the crash in oil prices.

The thesis behind the launch was that the common threat of ISIS, and its ideology, would lead to a realignment of interests of regional and international players who would ultimately work together to confront it and end or contain the proxy wars that contributed to the spread of extremism.

The end of conflict, and the expected oil price recovery, would ultimately lead to an economic revival whose sustainability would be anchored by a multi-year reconstruction spending to repair the damage of over four decades of conflict that is orders of magnitude worse than that faced by any country in conflict in recent memory.

The five-year anniversary mark sees Iraq grappling with ingredients of yet another perfect storm: the disruptions to its economy in COVID-19's wake; a potential second wave of the pandemic that the weak healthcare infrastructure is ill-equipped to handle; and topped off by potential political instability as the new government pursues an economic reform program that simultaneously threatens the interests of the political elite and delivers austerity to an alienated population.

Iraq's equity market has arguably discounted these negatives and several others as it has been shredded by a brutal multi-year bear market in which the YTD decline of 14.6% comes on the back of declines of 1.3% in 2019, 15.0% in 2018, 11.8% in 2017, 17.3% in 2016, 22.7% in 2015, and 25.4% in 2014. The extent of this discounting makes its risk-reward profile very attractive versus almost all other equity markets that are still mostly discounting the same economic scenarios pre-COVID-19, even though the world has fundamentally changed since then.

In-spite of the varying extents of recoveries from the March lows, the gap between other equity markets and Iraq's equity market is still huge, supporting Iraq's relative attractiveness (chart below). 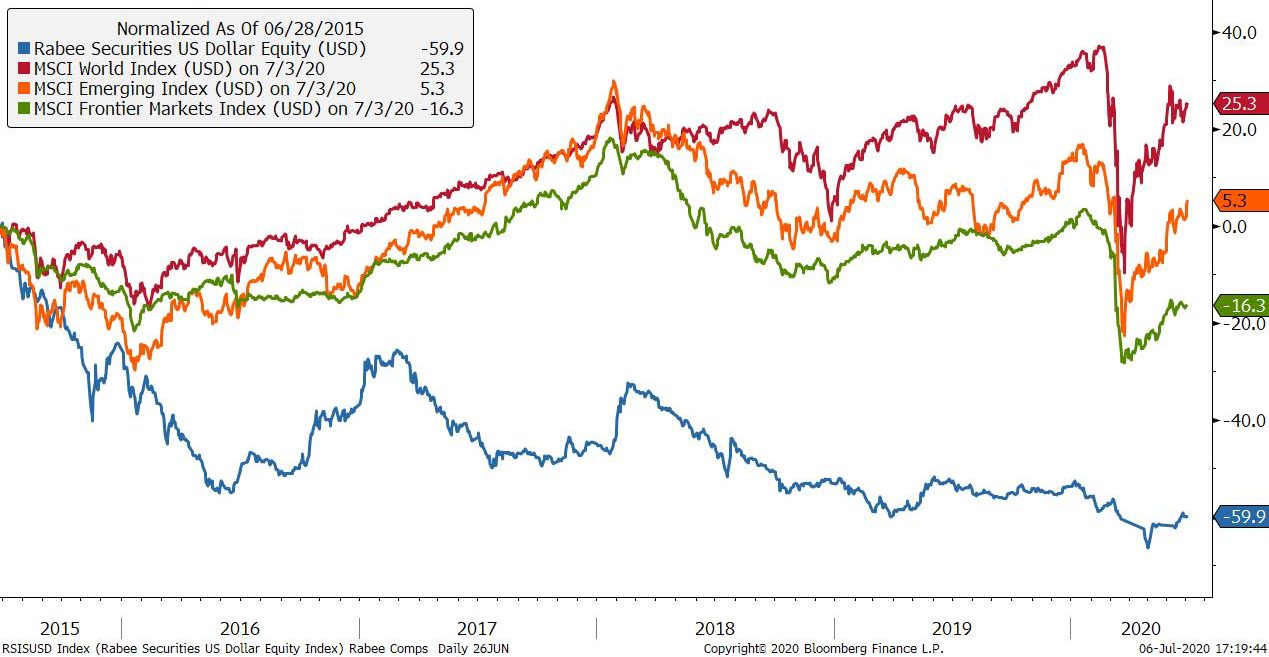 Events that unfolded over the years confirmed the basic tenets of the investment thesis, and even though the severity of the economic downturn was much worse than expected, the equity market showed signs of bottoming following the multi-year bear market as 2019 came to end. 2019 saw both the market broadening its breadth, and a tentative economic recovery at both the macro and company levels.

It can be argued that these encouraging developments were put on hold by the dramatic events of early 2020, i.e. the US assassination of Iran's top general in Baghdad and the subsequent Iranian rocket attacks on Iraqi military bases, as well as the onset of COVID-19. However, the real risks to the investment thesis were, paradoxically, the effects of increasing oil revenues on the last Iraqi government's myopic spending patterns.

This government, formed following the 2018 general elections and encouraged by increasing oil revenues in 2018 and 2019, reversed the first structural reforms that came with the Stand-By Arrangement (SBA) reached with the IMF in 2016, and reverted to the same failed policies of prior administrations. The explanation lies in the rentier structure of the Iraqi state, in which the public sector dominates the economy through the state's direct and indirect control of the largest economic activities, and its role as the largest formal employer.

Higher oil prices, in the past, incentivized successive governments to buy loyalty through immediate distribution of oil rents through expanding the public sector payroll at the expense of much more rewarding, but long-term, returns from investments in infrastructure (chart below). 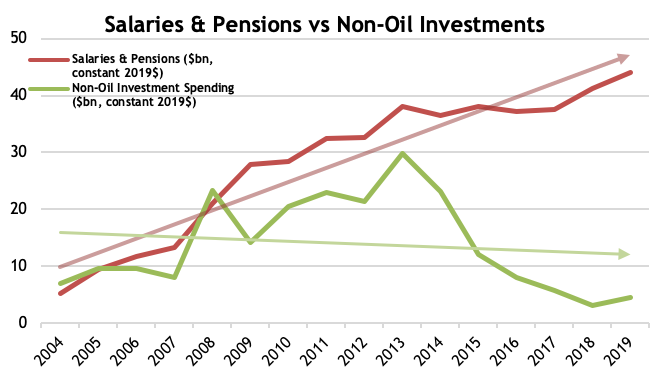 This playbook was evidenced in the 2019 expansionary budget, in which spending on salaries and pensions increased by 13% year-over-year and accounted for 47% of total expenditures, while non-oil investment spending increased a seemingly impressive 64% year-over-year, yet it accounted for 5% of total expenditures. The initial budgeted non-oil investment amount would have been equivalent to an 8.5% stimulus to the non-oil economy, which would have provided sustainability to the consumer spending led economic expansion underway (the "AFC Iraq Travel" report, in August, reviewed the revival of commercial life in Baghdad).

However, as 2019 wore on it was clear that the government was not executing on most of its investment spending program, and was planning to use the growing budget surplus instead to embark on a significant increase in the public sector payroll. The economic upshot would have been an acceleration of consumer spending, which while positive for equity returns, would have been short-lived, peaking in 2022 or so as the inevitable bust would have set-in by then.

The known nature of COVID-19 and the emerging, slow and un-synchronized recovery from the global lockdown, continuous to argue for oil prices, to average in the range of $30-40 per barrel for Brent crude for 2020, $45-55 per barrel for 2021. This means that Iraq cannot avoid embarking on real economic reforms. This is exactly what the new government, formed in May, is pursuing and as articulated by the Minister of Finance, these reforms include a fundamental retooling of the budget's structural imbalances.

The dilemma for the government is that on the one hand, the basic governing equations of Iraq's political system - which largely allowed the political elite to maintain their oversized influence on economic policies - are still in force, and as such the elite will likely derail real reforms that threaten their interests; while on the other hand the rolling economic crisis means that alternative proposed stop-gap measures will not work for long and so reforms are unavoidable in the end.

A way out is in pursuing reforms that will yield real economic dividends, yet at the same will not threaten the elite's interests. The first of these are the low hanging fruit, ignored during the years of oil aplenty, of measures that will allow the private sector to grow, supported by an unconstrained commercial banking sector and unhindered by government bureaucracy.

One of the first measures of the reform initiative supports this line of thinking in that the Central Bank of Iraq (CBI) introduced regulations that would allow commercial banks to provide letters of credit for government entities - a step that could lead to the erosion of the monopoly of the state banks, that in 2018 accounted for 81% and 86% of banking loans and deposits respectively, and which are mostly with the government.

In the short term, these measures would provide qualified banks with fee income to boost their earnings, eventually grow their deposit base as they develop their government businesses, in the process attract more private sector deposits, which ultimately would support their lending activities. More such low key, yet implementable measures are likely to be introduced over the next few months. Coupled with these would likely be measures that would remove some of the stifling regulations that hinder the private sector.

While such measures will not attract many headlines, and each on its own might not seem to be significant, their cumulative effects would be extremely positive for the banking sector. The first to feel these effects would be the earnings and book values of the ISX's listed banking sector, which given that the sector was one of the worst effected in the multi-year brutal bear market, these in turn would have outsized effects on the sector's equity returns. Consequently, these would in turn impact the whole market positively given the sector's major weighting in the market's trading activity.

June was a low-key month as the re-imposed two-week curfew on May 31st to contain the latest increase in COVID-19 cases meant that the Iraq Stock Exchange (ISX) resumed trading on June 14th, following its last trading day on May 21st - which preceded the Eid-break. The ISX returned to its five-day a-week trading schedule, but the government's newly imposed rolling curfews on Thursday-Saturday as part of its COVID-19 containment efforts meant that the five-day working week has been cut down by one day, to Sunday-Wednesday.

Nevertheless, that still means a 33% increase in trading activity, and although turnover was still low, the ISX continued its recovery from the April lows, up 5.1% for the month.