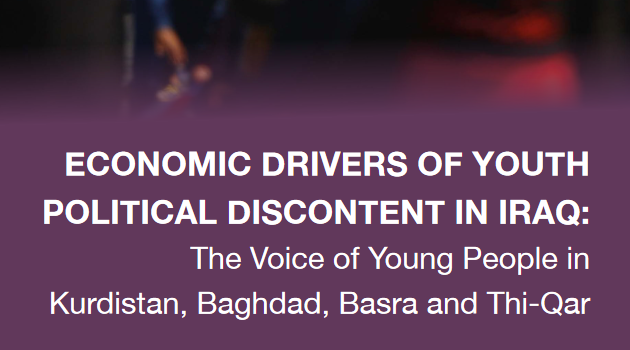 By Editor on 20th October 2020 in Employment

Economic Drivers of Youth Political Discontent in Iraq: The Voice of Young People in Kurdistan, Baghdad, Basra and Thi-Qar

Exactly one year on from the start of widespread popular protests on the 1st of October 2019, this rapid piece of research aims to respond directly to the tumultuous events of the past year and explores perceptions and attitudes of young people in Iraq and Kurdistan in their own words.

It builds a picture of the way in which young people's hopes and expectations for their future have been shaped by Iraq's recent past, and in particular, their views of their economic prospects in comparison to their parents' generation and their peers in other regions of the country, as well as in neighbouring countries.

On the basis of this primary research, the report formulates recommendations for policymakers, as well as further questions which deserve exploration in greater depth. This piece focuses on three regions in Kurdistan (Dohuk, Erbil and Sulaimani), which are seen as the most challenging regions for young people, and three regions in Iraq (Baghdad, Basra and Thi-Qar), which have seen the worst of the protests and unrest since October 2019.

This publication has been written by Sajad Jiyad, Müjge Küçükkeleş and Tobias Schillings as part of 'Improving Policy, Service Delivery, Gender Equality and Responsiveness to Iraqi Citizens', a multi-year Sida funded project implemented in partnership by Global Partners Governance (GPG) and the Iraq Foundation (IF).