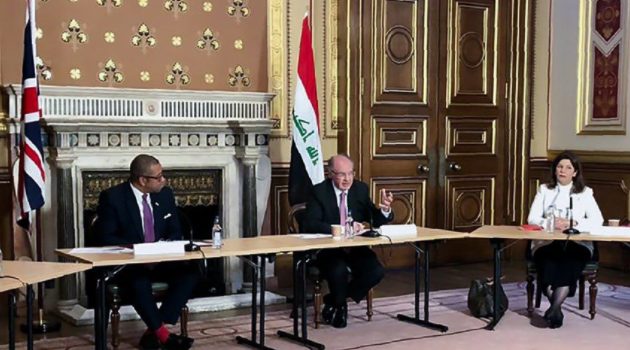 Reforming the economy and improving the security situation are vital if Iraq is to build back better from coronavirus, Foreign Secretary Dominic Raab said, after his meeting with Iraqi Prime Minister Mustafa Al-Kadhimi on Thursday 22nd October.

HRH The Prince of Wales and Prime Minister Boris Johnson also met Kadhimi yesterday (Thursday 22 October), their first meetings with him since he became Prime Minister of Iraq.

Rising COVID-19 cases and depressed oil prices have left Iraq in urgent need of international support. The UK is launching a £6 million three-year programme to support the Government of Iraq's capacity to tackle these challenges. The new project will draw on world-leading expertise from the public and private sectors to boost stability and deliver critical economic changes to drive growth.

The UK has also brought together the international community to form the Iraqi Economic Contact Group (IECG), which will work with the Iraqi Government to develop a roadmap to halt an economic crisis and create opportunities for Iraq's people to secure better futures. The IECG's inaugural session was opened at the Foreign, Commonwealth and Development Office by Iraq's Deputy Prime Minister and Finance minister Ali Allawi and UK's Minister for the Middle East James Cleverly, and attended virtually by delegations across the world.

Recent militia attacks in Baghdad and Erbil have endangered both Iraqi citizens and diplomatic personnel. The UK is working with the Iraqi Government to strengthen security measures, so that Iraqi citizens and foreign personnel can live and work safely. As a leading member of the Global Coalition, we are also at the forefront of efforts to support the Iraqi people against Daesh's violent extremist ideology.

The UK and Iraq also have a long history of collaborating to protect cultural heritage and to celebrate this, the Iraqi Prime Minister and UK Media & Culture Minister John Whittingdale visited the British Museum on Friday morning to see the museum's ancient Mesopotamian collections. They also saw the Sumerian Plaque identified by the British Museum on the art market as being illegally exported from Iraq and which is being temporarily displayed at the Museum, before it is repatriated to Iraq.

The UK-led Protect Cultural Heritage campaign helps to preserve and restore Iraq's cultural heritage, which has ruthlessly been targeted by Daesh for exploitation and destruction. The campaign, which is run by the Global Coalition's Communications Cell also includes the UK Government supported British Museum Iraq scheme, which has helped to train over 50 Iraqi archaeologists from the Iraq State Board of Antiquities and Heritage to deliver the expertise needed to undertake vital reconstruction projects in damaged heritage sites.