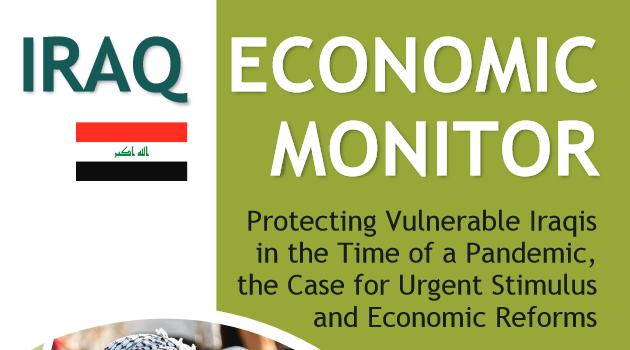 The twin shocks of COVID-19 pandemic and the collapse of oil prices have caused significant economic challenges and pushed millions of Iraqis into poverty, according to the new issue of the World Bank's Iraq Economic Monitor.

The new Fall 2020 edition of the Iraq Economic Monitor titled "Protecting Vulnerable Iraqis in the Time of a Pandemic: The Case for Urgent Stimulus and Economic Reforms" finds that even under a benign impact scenario, up to 5.5 million more Iraqis could fall into poverty due to the twin crises.

Furthermore, the potential reduction of the public wage bill and pensions could push an additional 0.4 to 1.7 million Iraqis into poverty unless the rightsizing exercise is introduced in a progressive and efficient fashion.

The economic monitor estimates that Iraq's GDP is set to contract by 9.5% in 2020. While oil production plummeted to a five-years low, Iraq's economy contracted by 6.8% during the first half of the year; of which non-oil GDP contracted by 9.2% as lockdowns and other COVID-19 related containment measures affected services sectors.

According to the report, the Iraqi government revenues fell by 47.5% in the first 8 months of 2020 while expenditures remained high as a result of the public wage bill and pensions. Such budget rigidities put pressure on government financing needs which are expected to reach a staggering 25.8% of GDP by end of 2020.

Multiple security and economic crises in recent years have left unequal imprints across regions and groups in Iraq, yet the horizon on the country's economic outlook revolves around the global prospects of the oil markets and the capacity of the healthcare sector to cope with the pandemic.

Conscious of the situation, the Government approved in October 2020 a comprehensive policy and reform White Paper which sets out a blueprint for reforms over the next 3 to 5 years that if implemented could mark a turning point for Iraq's economy. The White Paper aims to rebalance the economy and put it back on track by enabling the state in taking necessary actions to create a dynamic and diversified economy. This in turn leads to the creation of jobs for citizens to have a decent living.

"The magnitude of economic challenges facing Iraq need a long-term solution and long overdue structural reforms," said Saroj Kumar Jha, World Bank Mashreq Regional Director. "The reforms outlined in the Government's White Paper, if implemented, will boost job creation, especially in the private sector, as well as economic growth, which are key to improving the livelihood of Iraqis."

There are large economic gains to be made through the implementation of the long-awaited reforms. The World Bank simulates that such reforms could add as much as 58.4% to Iraq's per capita GDP growth. Overall, the ultimate success of this reform initiative is dependent on the political will and the garnering of public support to lead Iraq out of the fragility trap that it has been grappling with for so long.

The policy response requires working towards health and livelihood protection in the short term, including usage of tools like cash transfers, public works, or active labor market programs, but also addressing structural issues through a deeper reforms program.