For Iraq and its equity market the year ended the same way it began, with a bang that is much louder than its effect.

The IQD's parallel market's FX price increased throughout the year, from about 1,203 at the start of 2020, reflecting several factors. Starting with the momentous events at the beginning of the year that raised the spectre of a US-Iran proxy war fought in the country, followed by the full lockdown from mid-March and the rolling lockdowns that cut the working weeks to four days throughout the summer, and finally by the rumours of a devaluation as last reported on here in October. 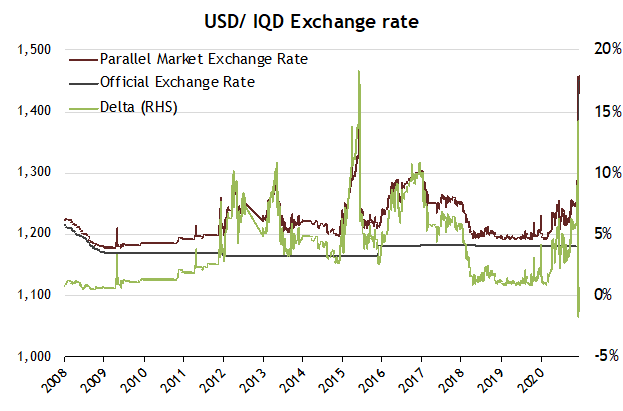 Moreover, USD-Iraqi Dinar (IQD) transaction volumes conducted by the Central Bank of Iraq (CBI), declined significantly in the two weeks following the devaluation reflecting market uncertainty and confusion over whether the devaluation would be challenged by parliament. Prior to the announcement these volumes were beginning to show a pick-up in the first two weeks of December after a few months of low volumes - daily volumes throughout July-November were on average 86% of the levels that prevailed from January to mid-March. 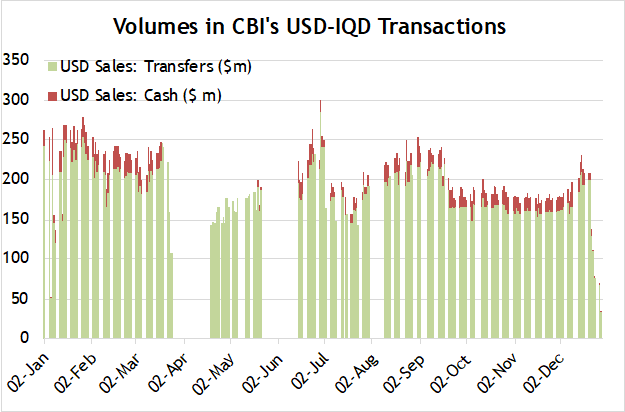 The last time the IQD went through a significant devaluation was in the early 1990s in response to the United Nations (UN) embargo following the invasion of Kuwait, and before that during the Iraq-Iran war in the 1980s. The official exchange rate, last fixed at USD 1 = IQD 0.31 in 1982, remained the same until the rate and the rules governing the convertibility of the currency changed following the US invasion in 2003.

However, the parallel market rate, or what was referred to pre-2003 as the black-market rate, declined meaningfully during the 1980s to about USD 1 = IQD 1.86, and nosedived to about USD 1 = IQD 3,000+ by 1995 as the government resorted to printing money to meet its expenditures as its oil revenues came to an end following the UN embargo in response to the invasion of Kuwait.

The UN's "Oil-for-Food programme" in 1995 improved the rate somewhat but it remained at these elevated levels until 2003. Following the invasion, new IQD notes were issued to replace the old notes and the rate began to recover with the earliest Central Bank of Iraq (CBI) data showing an average new official rate of USD 1 = IQD 1,949 in October 2003. The stabilisation of the country in the following years brought with it a meaningful recovery in the exchange rate as can be seen from the above chart.

However, the current devaluation is very different from those of the past. The primary reason was to stretch the government's oil revenues to cover more of its expenditures and thus to preserve the country's foreign reserves. Nevertheless, a by-product of the devaluation was to address the country's loss of competitiveness versus its major trading partners whose currencies depreciated significantly versus the USD, and hence the IQD, over the years as argued in the government's reform program, known as the "White Paper".

The equity market reacted extremely positively to the news of the devaluation, with the Rabee Securities RSISX Index rallying 8.7% in local currency terms in the five days between the announcement of the devaluation and the closing of the month. Among the top gainers in the same five days were Baghdad Soft Drinks (IBSD) up 19.6%, National Bank of Iraq (BNOI) up 9.5%, Asiacell (TASC) up 5.9%, and Bank of Baghdad (BBOB) up 5.1%. The most promising aspect of the rally post devaluation has been the significant increase in turnover following a very subdued start to the month, as well as the increased foreign buying as can be seen in the two charts below. 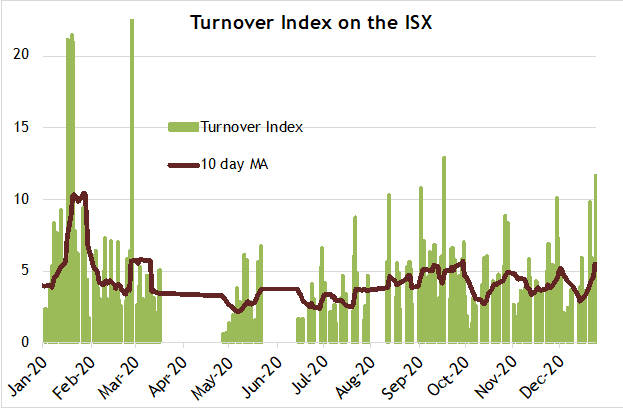 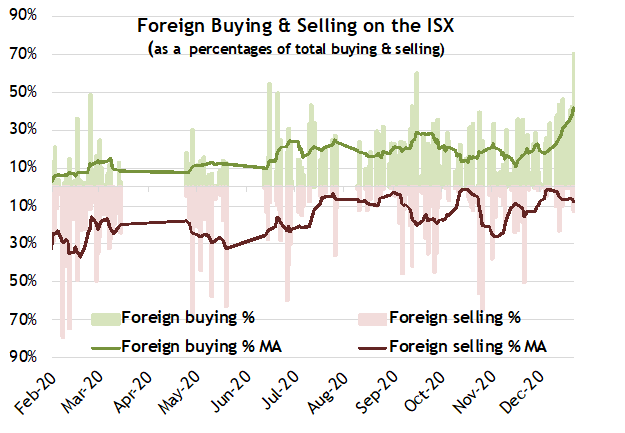 While the devaluation is an adverse event, the reaction of the equity market and the increased foreign participation indicates that the change is positive for equities. While the missing pieces of Iraq's re-rating are many and will take time to materialize, this positive reaction to the devaluation suggests that the event might start the process of Iraq's re-rating - which from a long-term perspective is positive for the equity market.

Away from the drama of the devaluation and the market's action, Christmas was more special than usual this year as parliament voted unanimously to establish Christmas as an annual national holiday, making permanent the government's decision two years earlier. Parliament's vote was preceded by a Vatican announcement that Pope Francis will visit Iraq in March 2021, the first visit by a pope to Iraq and the first visit by the current pope since the pandemic began.

Iraq's leaders attended Christmas Mass, including the President and the Prime Minister, calling for the protection of Iraq's Christian minority and reaffirming the continuity with Iraq's Christian past - before the sacking of Baghdad by the Mongols in 1258 and the Tamerlane in 1410, the city was a major world centre of Christianity in which "... the Iraq-based Church of the East had bishops and monasteries as far east as Beijing." Source: Heirs to Forgotten Kingdoms. Yet probably the most poignant was the Prime Minister's visit to the church of "Our Lady of Salvation" - an Assyrian Christian church that survived two terrible terrorist attacks in 2004 and 2010, with the last one an attack at a Sunday Mass that led to over 52 deaths.