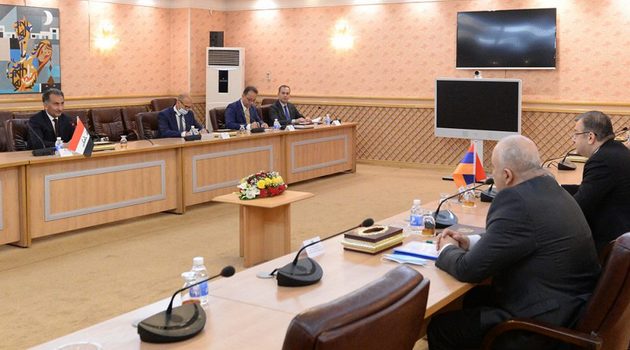 By Editor on 28th February 2021 in Iraq Industry & Trade News

Armenia has opened a Consulate General in Erbil.

Arshak Manukyan, the Consul General of Armenia in Erbil, delivered opening remarks at the event, welcoming guests and presenting the goals and upcoming programs of the diplomatic mission.

The Consul General noted that due to active contacts with the counterparts from Iraqi Kurdistan during recent months, an agenda of mutual interest has already been established, and expressed willingness to make efforts for its implementation.

Deputy Foreign Minister of Armenia Artak Apitonian delivered welcoming remarks. He stressed that dynamically developing relations between Armenia and Iraqi Kurdistan are based on strong historical ties and friendship of the two peoples.

"Today we indeed open a remarkable page in the history of the Iraqi-Armenian relations․ Armenia has always paid a great importance to the development of relations with the Republic of Iraq. The launch of the activities of the Consulate General of the Republic of Armenia in Erbil, which we are announcing today, attests to that.

"The relations established between our peoples are based on centuries-old mutual trust and respect. Armenians have settled in this country, including in Iraqi Kurdistan, at various stages of history and have always enjoyed an exceptionally friendly attitude from the authorities.

"Therefore, it is not accidental that today a big Armenian community continues to live here, contributing to the development of the country of their citizenship."

Deputy Foreign Minister Artak Apitonian and Director of the Department of Foreign Relations Safeen Dizayee together raised the national flag of Armenia at the consulate, which was consecrated in the Armenian Church of Erbil the day before.

The members of the Kurdistan Regional Government, members of parliament, religious leaders, heads of diplomatic missions accredited in Iraq, representatives of international organizations and journalists participated in the meeting.