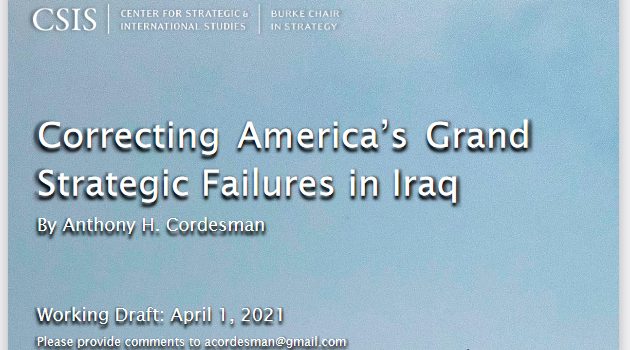 By Editor on 21st April 2021 in Politics, Security

By Anthony H. Cordesman, for the Center for Strategic and International Studies (CSIS). Any opinions expressed are those of the author(s), and do not necessarily reflect the views of Iraq Business News.

[Please note that this report was issued on 1st April 2021, several days before the Strategic Dialogue between the United States and Iraq.]

Press reports indicate that the U.S. is soon to have yet another meeting with Iraq on establishing some kind of future strategic relationship.

Unless this meeting makes a dramatic break with the past, it will be a dismal failure and do more to empower Iraq's divisions and Iranian influence than to serve U.S. and Iraqi interests or to help bring any kind of security and stability to the MENA region.

There are twelve reasons why the U.S. may fail, and all of them are issues that the U.S. has so far failed to address at the grand strategic level.

One Response to Correcting America's Grand Strategic Failures in Iraq