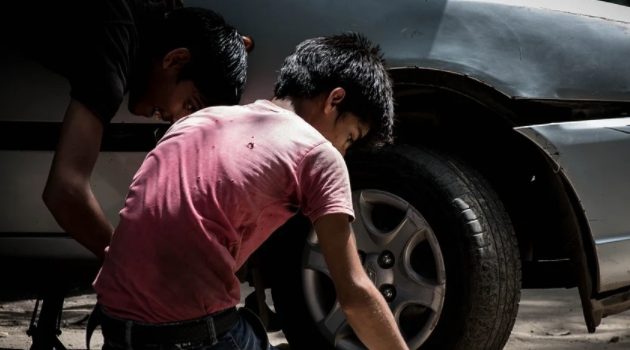 The International Labour Organization (ILO) in Iraq and partners launched a nation-wide campaign to tackle the worst forms of child labour in the country.

The campaign will target 10,000 children, their families and guardians, teachers, employers, and the media through a series of activities which aim to raise awareness on the increasing dangers of child labour, mobilise efforts to reach the heart of communities most effected by the rise of child labour in the country; and encourage activities to amplify the voices of those effected by the problem.

During a virtual meeting, which was attended by senior representatives of the Ministry of Labour and Social Affairs of Iraq, including the Kurdistan Region of Iraq, as well as representatives of ILO's local implementing partners Al-Tahreer Association for Development and Kurdistan Save the Children, partners discussed joint efforts in the implementations of the campaign and its activities.

"The year 2021 has been declared as the International Year for the Elimination of Child Labour, and our campaign in Iraq is part of these global efforts to combat child labour," said Dr. Maha Kattaa, ILO Country Coordinator in Iraq. "We hope through your support, recommendations and collaboration, this campaign will have a significant and lasting impact on the ground. We want to speak as one voice against the dangers of child labour and seek wider partnerships, such as that of the private sector, to address these issues."

Child labour has been on the raise in Iraq in recent years due to a combination of factors including armed conflict, displacement and economic challenges, which have been further compounded by COVID-19, forcing a growing number of children into the workforce.

This campaign aims to inform communities about the negative consequences of child labour and ultimately change behaviour of society and institutions alike. While it may not be effectively removing these factors, it aims to make child labour unacceptable and make it an urgent priority for responsible authorities to tackle and for businesses to reject.

"Our ministry is conducting a campaign through its inspection unit to tackle the worst forms of child labour and we hope that these and other efforts will complement the activities of the campaign which is being undertaken by the ILO," said Mr. Raed Jabbar Bahedh Director General of the Department of Labour and Vocational Training at the Ministry of Labour and Social Affairs.

"We are ready to coordinate, support and engage in the awareness raising campaign," said Dr. Arif Hito, the Director General of the Ministry of Labour and Social Affairs in Erbil, Kurdistan Region of Iraq. "Such a campaign needs take into account awareness raising on the social level, and ensure there are alternative solutions to families and children."

The campaign will be guided by existing ILO tools to combat child labour, such as SCREAM, which is an education and social mobilization initiative, to help educators worldwide promote understanding and awareness of child labour among young people, and the recently launched inter-agency toolkit to guide humanitarian actors and other agencies in the global community to effectively prevent and respond to child labour in humanitarian action. These tools will be translated and adapted to the Iraq context and used through various activities including social media campaigns and community-level outreach.

The campaign will also support on-going efforts that seek to link children and their families with existing support mechanisms. This will complement activities by the ILO and partners to address child labour. With support from the European Regional Development and Protection Programme for Lebanon, Jordan and Iraq (RDPP II) - a joint European initiative by the Czech Republic, Denmark, the European Union, Ireland and Switzerland, the ILO is currently implementing a project which tackles the worst forms of child labour amongst Syrian refugees, internally displaced persons and vulnerable host community members in Iraq.

Iraq has ratified the ILO Minimum Age Convention, 1973 (No. 138) and the ILO Worst Forms of Child Labour Convention, 1999 (No. 182), which are central to the fight against child labour. In December 2019, the ILO signed and launched a new Decent Work Country Programme (DWCP) in Iraq in partnership with the Government and social partners for the period 2019-2023. Under the programme, the ILO is working with government, worker and employer organizations to support national initiatives on employment promotion, rights at work, social dialogue and social protection, including developing an effective framework to address child labour.