By Editor on 12th July 2021 in Ahmed Tabaqchali, Investment

June saw the publication of Undervalued-Shares.com's third instalment piece on investments in frontier markets focusing on the compelling investment potential of Iraq's equity market - particularly in light of the misconceptions versus the reality on the ground in Iraq from the perspective of a global investor focusing on frontier markets.

The author reviews the current entrenched negative view on Iraq, which is solely focused on the country's recent history of conflict and notes that:

"Even I hesitated and wondered if this subject was pushing it a bit too far. In the end, it was this deep-seated, widespread pessimism that made me take a closer look. Quite often, when there is a widely-held belief that few people care even to question anymore, it turns out that the tide has already started to turn - without anyone noticing yet."

The tide and the pessimism that the author refers to could be seen in the market's strong year-to-date performance in which the Rabee Securities RSISX USD Index is up 24.3% despite the worst-case prognosis made last year for Iraq as it was yet again faced with the ingredients of a perfect storm. In a replay of the most recent perfect storm marked by the onset of the ISIS conflict and the fall in oil prices in 2014, the worst-case prognosis reappeared and entrenched this pessimistic view of Iraq.

Such a pessimistic view overlooks the potential opportunities that the country offers in-spite of its recent history of violence and conflict that gave rise to such pessimism. The AFC Iraq Fund's investment thesis is based on arbitraging the delta between the real Iraq risk, high as it is, versus the perceived risk, which is much higher still. Its long-term risk-reward proposition argues that as this delta narrows, helped by a better understanding of Iraq's risks, then asset prices - priced at the perceived risk - should rise, reflecting the real risk.

This opportunity for arbitraging the delta between the real Iraq risk, high as it is, versus the perceived risk, is sought and pursued on the ground in the real economy by some of the best companies operating in Iraq. Three such companies, listed on the Iraq Stock Exchange (ISX), in alphabetical order, are mobile telecom operator AsiaCell (TASC), Pepsi bottler Baghdad Soft Drinks (IBSD), and banking group the National Bank of Iraq (BNOI). The opportunities pursued by these companies in 2021, as discussed in more detail here in February, briefly are:

While reviewing the opportunities that Iraq presents the author further notes "Without a doubt, Iraq has its own set of political risk. This isn't Switzerland or Norway, and you can't even compare it to emerging markets like Egypt or Kenya. It's a war-torn country with one of the world's most underdeveloped economies. The progress mentioned above is set within a broad set of economic, political, and societal challenges ... However, such problems are also the very point of investing in frontier countries. The idea behind frontier investing is to go in at a very early stage. The term "ground-floor opportunity" is used too often nowadays, but Iraq is a country that truly deserves this description". The opportunities, discussed in the prior paragraph, as pursued by TASC, IBSD and BNOI, are living proof of this concept - especially as they are backed by solid operating performances during the time when the worst-case prognosis was supposed to be taking place.

Furthermore, these opportunities could be further enhanced as the revenues from current high oil prices feed into the economy. The author notes "Throw in the current favourable dynamics driving the oil price, courtesy to the West's misguided policy of reducing its production of fossil-based fuels before alternatives are in place ... Iraq not only has the world's third-largest oil reserves, but also some of the lowest production costs. Now that oil is back up at USD 70 per barrel (and with real potential to reach USD 80 or even USD 100), the country's extreme leverage towards oil could yet again reap dividends."

While there is a great deal of uncertainty and debate on the extent or timing of the transition away from fossil fuels, there is little doubt that the global economic rebound is accelerating - fuelled by an unprecedented fiscal stimulus by world governments - and thus supporting the current firm oil prices. Recently, the OECD raised its projections for global GDP growth to 5.8% in 2021 versus prior forecasts of 4.2%, and for growth of 4.4% in 2022 versus prior forecasts of 3.7%. A continued successful rollout of the developed world's vaccination program, possibly joined by a quicker rollout of the emerging and developing world vaccination programmes, could see global GDP return by end of 2022 to the expected trendlines that prevailed before the onset of COVID-19 (chart below). 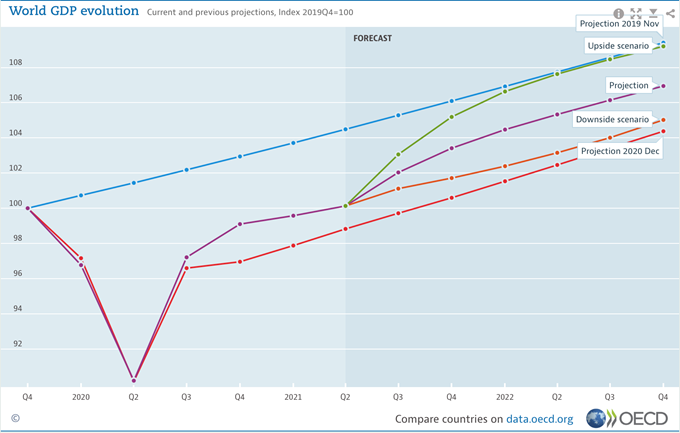 (Source: OECD's latest Economic Outlook as of May 31st)

Iraq's extreme leverage to oil prices makes it just as leveraged to this post-COVID rebound in the global economy and the associated rebound in oil demand, which works by driving Iraq's economy and consequently corporate profits, as discussed in more detail in "On the Economics of Coiled Springs, Crouching Tigers, and Chicken Lickens".

The positives discussed so far notwithstanding, the outlook for Iraq is still fraught with uncertainties. The improved outlook for the world economy is highly dependent on the sustained pace of current vaccinations and the evolution of the pandemic, yet this rebound will only take the world economy back to its pre-COVID-19 trendline by end of 2022. Moreover, the current firm oil prices and the supply-demand balance for oil, are highly dependent on the continued adherence of OPEC+ to the April 2020 agreement, as well as the continued restraint by the US shale industry.

However, from a risk-reward perspective, the Iraqi equity market is still very attractive versus other markets worldwide, most of which have had multi-year bull markets. Moreover, their recoveries from the April 2020 lows have surpassed their all-time highs, while the Iraqi equity market is just emerging from its multi-year lows - in which it, as measured by the Rabee Securities RSISX USD Index, is still down about 60% by end of June from the 2014 peak - even after its performance of being up 24.3% for the year.