By Editor on 4th February 2021 in Ahmed Tabaqchali, Investment

A quiet start to the new year would have been welcome after the drama of the currency devaluation in December. However, this January, the stage was set for a potential conflict between the US and Iran fought across Iraq.

In mid-December, Iran's supreme leader renewed his revenge vow two weeks ahead the first anniversary, on January 3rd, of the US strike in Baghdad that killed Iran's top general. At the same time, the prior US administration was escalating its aggressive stance against Iran before its term expired on January 20th.

The US increased its military presence in the Gulf in the weeks before the anniversary which further exacerbated tensions between the two antagonists. This increased presence was extremely concerning in light of reports in November that the prior US President considered options for attacking Iran's nuclear facilities before leaving office.

While thankfully none of these fears materialised, on January 21st a suicide bombing took place in central Baghdad for the first time in years, in which the Islamic State Group (ISIS) claimed responsibility. The combination of fears and the bombing had a chilling effect on economic activities, including trading on the Iraq Stock Exchange (ISX) where average daily turnover (excluding block transactions) declined by 26% month on month (chart below).

Foreign buying, a solid trend of the last few months of 2020, almost disappeared, while foreign selling was very low in both relative and absolute terms (second chart below). Not surprisingly, the market, as measured by the Rabee Securities RSISX USD Index, ended the month down 9.3%. 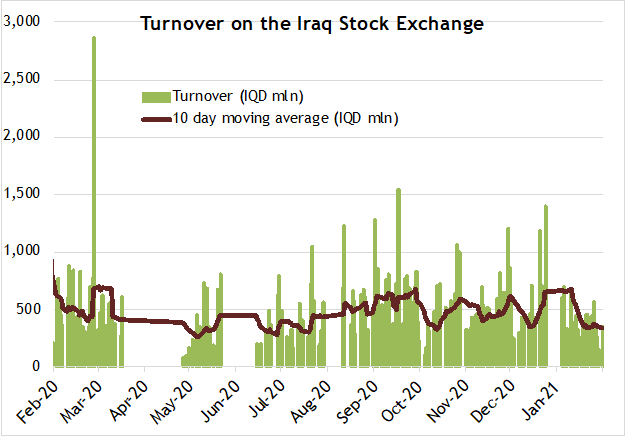 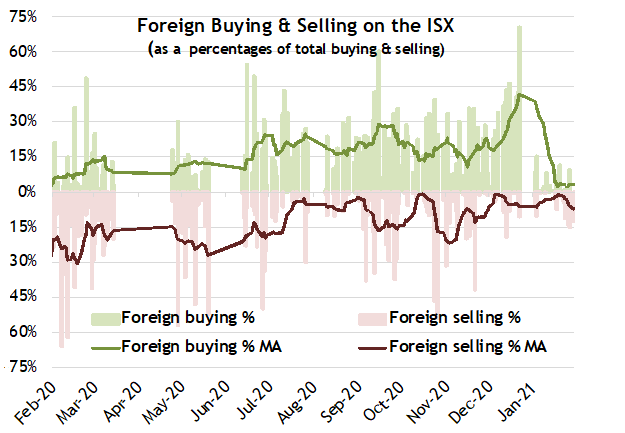 Away from the concerns of the US-Iran conflict, the equity market digested several positive corporate activities that affected listed companies in the banking, consumer, and telecom sectors.

The first corporate development took place in the banking sector with the takeover by the National Bank of Iraq (BNOI) of the Iraqi branch network of Lebanon's Bank Audi,  as part of a larger acquisition by BNOI's parent Capital Bank of Jordan (owning 61.9% of BNOI) of Bank Audi's Jordanian branch network. The combined takeover of the assets and the assumptions of the liabilities of one of Lebanon's top banking institutions in Iraq and Jordan was made possible by Lebanon's financial crisis which forced its banks to halt their international expansion, divest their prized international assets, and refocus on their domestic market. Also, the takeover fits in with Capital Bank of Jordan's expansion strategy in its domestic market, and in its much larger neighbouring market of Iraq, as it seeks to grow both its asset base as well as its revenue streams.

While BNOI hasn't reported audited full year 2020 numbers, its unaudited fourth quarter numbers show for 2020 year-over-year pre-tax earnings growth of 116.3%, loan book growth of 88.0%, and deposit growth of 44.9%, for a loan/deposit ratio of 64.5% versus 54.9% in 2019. The December market review "Private Sector Deposit & Loan Growth Continues" looked at the growth of private sector loans and deposits generally, and specifically for selected ISX banking stocks. The piece highlighted with data and charts BNOI's growth in the key metrics of loan book and deposit growth both in absolute terms and relative to its peers on the ISX. Upcoming financial data in 2021 should incorporate the figures from the Iraqi branches of Bank Audi and would provide data for the combined entity's potential future growth rate, while the increased asset size of the combined entity should enhance its competitive market position.

This acquisition by BNOI of Bank Audi's Iraqi branch network is a first in the Iraqi banking sector and is likely to accelerate the sector's development.  It is also the first expansion of the sector following the initial foreign bank's acquisition of major shareholdings in local banks post the March 2003 US invasion of Iraq. Then, the governing Coalition Provisional Authority (CPA) brought the country's legal framework for banking in-line with international standards, and lifted restrictions on foreign participation in the banking industry. A number of regional and international banks bought majority stakes in a number of Iraqi banks to take advantage of the potential growth as banking adoption takes hold in Iraq's cash dominant economy.

The second corporate development was in the consumer sector with the acquisition by Pepsi bottler Baghdad Soft Drinks (IBSD) of privately held Al-Zaki Group - another bottler, but of juices and water, and about to extend its offerings to bottled milk. This acquisition fits in with IBSD's strategy of both expanding its product line and deepening its relations with PepsiCo; and follows up on its prior takeover in 2016 of Ynabee' Al Zawraa Company, a bottler of Aquafina, PepsiCo's water brand. The 2016 acquisition increased IBSD's product line and addressable market, and the 2021 acquisition should expand both further. Moreover, while Al-Zaki Group is not a PepsiCo franchisee, it is expected that a successful penetration of the juice market in Iraq by IBSD would enable the group to obtain from PepsiCo the franchise for its Tropicana juice brand.

The final corporate development was in the telecom sector with the introduction of 4G-LTE (fourth generation long-term evolution) by the telecom operators. While the offering is in the very early stages, it promises to bring significant advantages to both internet users and to the ISX's listed mobile telecom operators such as AsiaCell (TASC) and Zain-Iraq (TZNI). Growth in mobile internet usage expanded considerably after 3G was launched by the mobile operators in early 2015 - which currently accounts for a meaningful share of all internet access in the country.

This is a massive market with significant growth opportunities as Iraq's mobile internet usage catches up with its regional peers. The introduction of 4G-LTE presents a significant opportunity for the mobile telecom operators to enhance their competitive offerings. Moreover, 4G-LTE's materially faster download-speeds and broader bandwidth versus 3G will allow them to offer meaningfully better service and charge higher prices.

These positive corporate activities in the banking, consumer, and telecom sectors underscore the significant earnings growth opportunities for focused and well-run companies in Iraq's under-developed, yet large, economy. Moreover, these recent developments also underscore the relative attractiveness of the stocks in these sectors, within the context of the Iraqi equity market that is at the tail end of a brutal six-year bear market, and as such a re-rating of the Iraqi equity market along with other frontier markets is likely to happen sooner than generally expected.