By Editor on 3rd May 2021 in Ahmed Tabaqchali, Investment

Market Review: "On the Economics of Coiled springs, Crouching Tigers, and Chicken Lickens"

The market, as measured by the Rabee Securities RSISX USD Index, continued its string of gains for the third month in a row, ending up 6.6% in April, and 24.4% for the year.

The same positive trends - i.e., increased daily turnover, foreign and local buying ­- that drove the rally year-to-date continued into early April in which the market was up about 10.5% from the end of the prior month.

However, the market couldn't sustain these gains and profit taking eroded them as prices declined somewhat on lower turnover suggesting that the market is in the process of consolidating the recent gains (chart below). 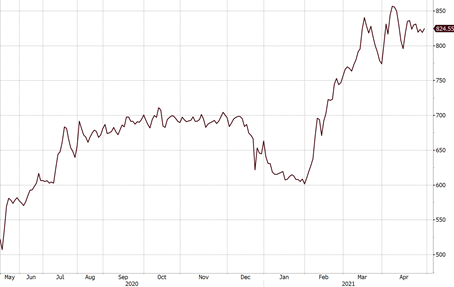 Supporting the market's consolidation thesis are recent economic data which suggest that conditions are in place for a solid rebound in the Iraqi economy from the depressed levels in 2020 along the lines articulated by Andy Haldane, the Bank of England's chief economist, as "the economics of coiled springs, and crouching tigers, and 'Chicken Lickens" in expecting a "rapid-fire recovery" for the UK economy as it emerges from last year's depressed levels.

Iraq's extreme leverage to oil prices created the conditions for a perfect storm in 2020 as the double whammy of the crash in oil prices and the COVID-19 lockdowns crushed its economy with the IMF forecasting, as recently as December, that Iraq's real GDP would shrink by 11% year-over-year in 2020. With the reversal of these same forces in 2021, the same extreme leverage to oil prices would create the conditions for a strong economic rebound from these extreme low levels.

The "coiled spring" that would kickstart the economic rebound is the meaningful increase in government spending in 2021, following the delayed passage of the 2021 budget at the end of March. The oversized role of the government's expenditures in the economy with the government as the largest formal employer and driver of non-oil economy, results in an efficient and direct transmission mechanism of oil revenues into the real economy. The government's projected spending on the public sector wage bill (salaries and pensions) is projected to grow by about 18% in 2021 over 2020's bill and would represent a 7% stimulus to 2020's IMF estimated non-oil GDP. This increased spending would provide a boost to consumer confidence following a difficult year in which this spending was in doubt as the government struggled to pay the public sector wage bill on time given the fiscal crisis that strained its finances. Government spending on goods and services is likely to rebound significantly in 2021 and could add about another 7% stimulus to the non-oil economy.  The government's investment spending will see a much larger rebound, from an extremely low base, representing an additional 11% stimulus to the non-oil economy. Given the government's historically very low execution rates in investment spending and its capacity constraints, it will be its current spending, in the form of the public sector payroll and spending on goods and services, that will kickstart the country's economic rebound which could be much higher than the IMF's projected 5.0% real growth in non-oil GDP in 2021.

This increased spending is likely to magnify the effect of the current "coiled spring" in the form of the expanded monetary base, or M0, which has accelerated in the first three months of 2021, aided by a rebound in oil revenues (charts below). This comes on top of sizeable liquidity injections in 2020: The first was the adoption of an accommodative monetary policy by the Central Bank of Iraq (CBI) to counter the effects of the pandemic-induced disruptions to the economy; while the second was a result of the indirect monetary financing provided by the CBI to the government to cover its revenue shortfalls. This expansion in the monetary base, is especially relevant to economic activity given the dominance of cash in the economy in which over 90% of the currency in circulation is outside of the banking system. 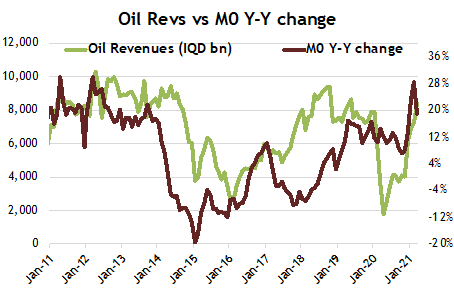 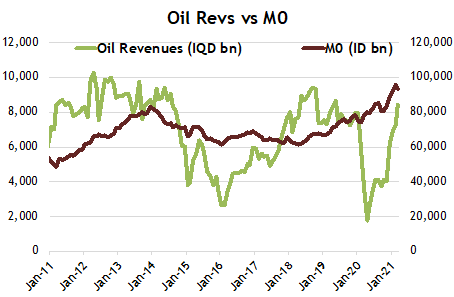 Latent consumer spending could be like a "crouching tiger" given the increased pickup in economic activity that has returned to levels meaningfully above those that prevailed just before the nationwide lockdown in March of last year, as seen from Google's mobility data (below chart). In particular, activity in the crucial sectors of retail and grocery has recovered up to 40-100% above the levels that prevailed pre-lockdown. The onset of the fasting month of Ramdan in mid-April, has somewhat curtailed activity but has not altered the trajectory of recovery. 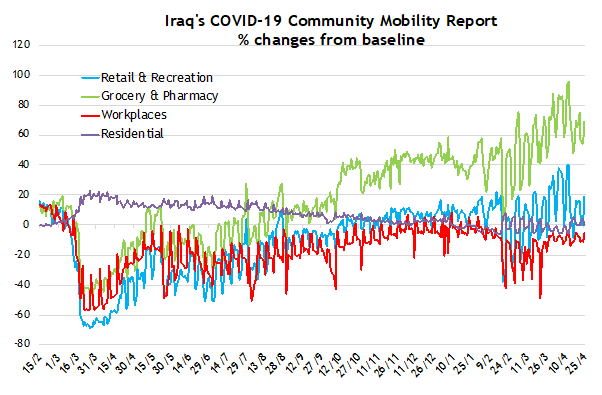 (Baseline is the median, for the corresponding day of the week, during January 3rd - February 6th, 2020.

While Google's mobility data provides a picture of economic activity and not transactions, yet some clues on economic transactions can be glimpsed from the volumes for USD-Iraqi Dinar (IQD) transactions (chart below) as conducted by the Central Bank of Iraq (CBI) in its weekly USD sales (transfers to facilitate foreign trade transactions as indicated by green bars and to satisfy the need for physical USD for Iraqi's travelling abroad as indicated by the red bars. USD transaction volumes converted to IQD to put the local demand for USD post-devaluation in context). 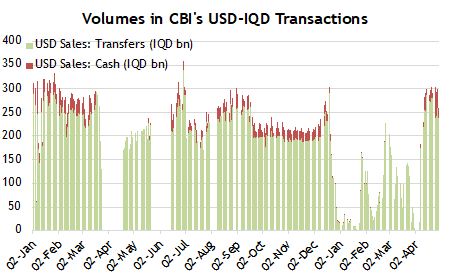 Demand for USD in the CBI's transactions is a reasonable proxy for consumer demand given the country's high dependence on imports to satisfy domestic consumption of goods and services. This demand dropped significantly following the 23% devaluation of the IQD versus the USD in late December. Though, after a prolonged period of adjustment demand has picked up significantly in the weeks following the passage of the budget in late March. However, a verdict on a resumption of consumer spending is somewhat complicated in this instance given the usual increase in demand associated with Ramadan. Moreover, a few weeks of USD demand data are not enough to reach any conclusions on whether domestic consumption, and hence demand for exports, have fully recovered or not. Nevertheless, this increased demand for the USD in combination with the mobility data makes for a compelling picture of potential consumer spending as a "crouching tiger".

While the market, as measured by the Rabee Securities RSISX USD Index, up 24.4% for the year as of the end of April is no longer discounting the worst of possible outcomes, but with the index still down over 60% from its 2014 high, it's clear that the market is yet to discount any meaningful economic recovery.

The positives of the current indicators pointing to a significant economic rebound notwithstanding, the outlook for Iraq is still fraught with uncertainties. For starters, the improved outlook for the world economy is highly dependent on the sustained pace of current vaccinations and the evolution of the pandemic, yet this rebound will only take the world economy back to its pre-COVID-19 trendline. Moreover, even if the world economic rebound is not derailed, the current firm oil prices and the supply-demand balance for oil, are highly dependent on the continued adherence of OPEC+ to the significant oil production cuts agreed in April 2020.