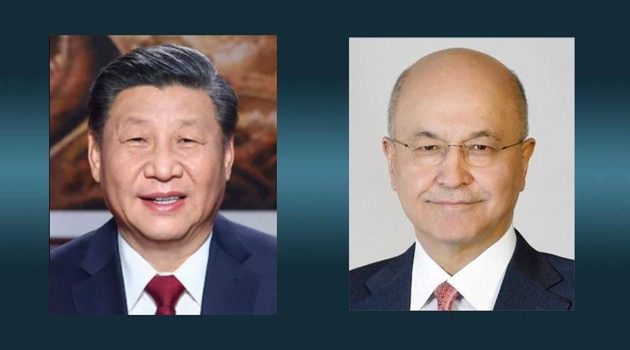 On Wednesday, August 18, 2021, the President of the Republic of Iraq, Barham Salih made a phone call to Chinese President Xi Jinping.

In the Phone conversation, President Salih congratulated the Chinese President on the 100th anniversary of the founding of the Chinese Communist Party.

According to a statement from the Office of the Iraqi President, the conversation focused on the historical relations between the two countries, and on the need to increase cooperation regarding the economy, trade and industry.

Talks also mentioned Chinese companies' role in rebuilding Iraq and their contributions in infrastructure, energy and oil sectors, in the ways that could better serve the interest of both peoples.

President Salih and President Xi Jinping agreed how important it was to strengthen cultural cooperation between the two countries, and it was asserted that a great number of fellowships could be awarded to Iraqi students at Chinese Universities.

The Iraqi President hailed China's role in assisting Iraq to address the challenges presented by the coronavirus outbreak through sending vaccines and sending experts to help Iraqi health staff.

Iraq and Pakistan to Increase Cooperation

China Buys "nearly Half" of Iraq's oil
After Afghanistan, Iraqis Fear They Could Be Next
Rafael City Project to be "an Urban Revolution"
Tags: China, featured, mn, Xi Jinpeng, Xi Jinping