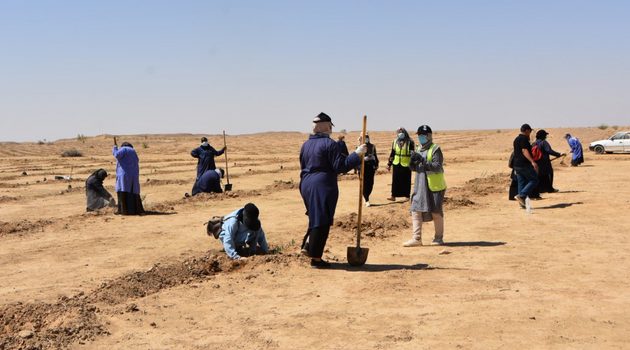 Six new facilities providing basic services to 230,000 residents in western Anbar have officially opened thanks to a partnership between the United Nations Development Programme (UNDP) in Iraq, the Governorate of Anbar, and the international community.

Additionally, a meeting with the Al Qaim Local Peace Committee supported by UNDP Iraq under its Social Cohesion programme was held, with discussions focusing on the sustainable reintegration of returned IDPs including families with a perceived affiliation to the Islamic State of Iraq and the Levant (ISIL).

Future areas of collaboration were also explored, with a site visit to discuss potential livelihood projects in the productive sector on land owned by Haditha's Department of Agriculture, and a stop by the Haditha Women's Cultural Centre to better understand the specific needs of local women. The mission concluded with a visit to an ongoing livelihood project funded by Canada which employs 200 workers - including women - to plant 15,000 olive seedlings (high olive oil trees), 2,000 palm seedlings (Zahddi trees) and build five wells.

"It's great to see cities in western Anbar so lively again. Essential services are up and running, shops and traders are open for business and people are out and about. The area was one of the first to be taken by ISIL and the last to be liberated, and I am proud that UNDP Iraq, in partnership with the Government of Iraq and the international community has completed 200 stabilization projects in the area, collectively benefiting more than 800,000 Iraqis," says Ms. Ali Ahmad.

"Western Anbar has always been a priority area for UNDP and will continue to be as we work tirelessly alongside the Anbar Governorate and local community leaders to support the return of remaining IDPs. I'd like to extend my deepest appreciation to our donors - particularly our longstanding partners USAID who funded five out of the six new facilities we inaugurated. USAID has made generous contributions to western Anbar, and to stabilization in Iraq generally. I would also like to express my gratitude for the strong partnership with the federal government and local authorities, which enables us to implement projects and ensure their sustainability in the most effective way," she added.

UNDP Iraq's FFS was established in 2015 at the request of the Government of Iraq with support from the member states of the Coalition to Defeat Da'esh (ISIL), to facilitate the return of displaced persons by rehabilitating critical services and infrastructure, provide short and medium-term employment, provide capacity support for municipalities and foster social cohesion across the liberated areas of Anbar, Diyala, Kirkuk Ninewa and Salah Al Din.

To date, $1.4 billion has been mobilized from the international community, with 2,944 projects completed, supporting more than 14 million Iraqis. Another 563 projects are currently underway.