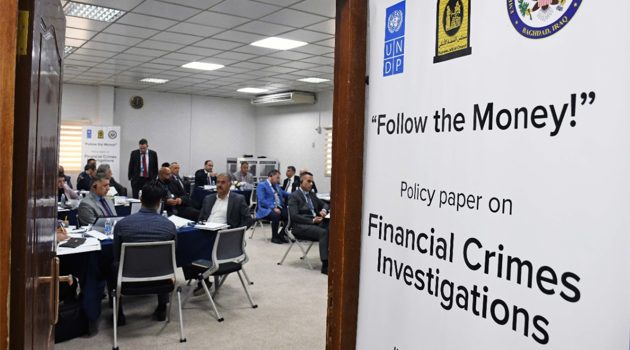 By Editor on 5th January 2022 in Iraq Banking & Finance News

The Federal Supreme Judicial Council of Iraq, the Kurdistan Judicial Council and UNDP Iraq, with support from the U.S. Government, launched a series of workshops for investigative judges, prosecutors, investigators, auditors and financial analysts from all across Iraq in late November 2021.

These workshops will aid Iraqi institutions involved in organized crime investigations, including corruption and money laundering, to better investigate and prosecute these crimes.

The workshops will help institutions such as courts, the Ministry of the Interior, Commission of Integrity, and the Federal and Kurdistan Board of Supreme Audit and the Anti-Money Laundering and Countering the Financing of Terrorism Office to develop financial evidence by tracking funds used in crimes and identifying criminal profits for confiscation.

The workshops, designed to enhance cooperation among the institutions by sharing institutional knowledge, investigative tools, skills and experience, continued through December and will also occur throughout 2022.

The workshops cover topics such as investigating corruption in public procurement, gathering and analysing evidence, and recovering illegally obtained assets. Knowledge from Iraqi practitioners will feed into a handbook on financial investigation procedures.

Taghreed Muhammad Ali, Director of the Administrative Investigation Department in the Federal Board of Supreme Audit, said that "the workshop deals with an important topic - financial crimes - by updating investigation approaches and tools, and providing the skills and experiences required for investigative judges, investigators, financial analysts, and auditors. It contributes to building stronger ties between the participating agencies and the investigative judges, who play a major role in this regard."

Public Prosecutor Badr Al-din Albarzanji from the Ministry of Justice, Kurdistan Region of Iraq, said, "the participants can practice their skills on a real, complete and practical case, and through the workshop every detail of this case is discussed and compared with the legal investigation procedures found in national Iraqi laws."

UNDP Iraq resident representative Zena Ali Ahmad said, "Thanks to the Government of the United States for their support. This information exchange between government, legal and financial entities in Iraq is vital to enhance the ability of judges and investigators to prosecute complex organised and financial crimes in Iraq."