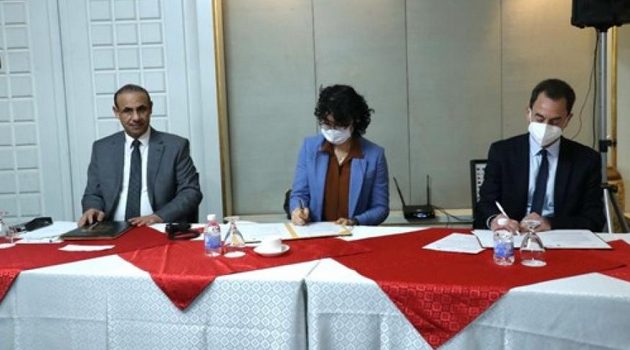 France Contributes US$ 1.539 M for Women Protection Services through UNFPA Programmes in Iraq

The United Nations Population Fund (UNFPA) in Iraq welcomes the French Government's new contribution of US$ 1,539,000 to strengthen the prevention of and response to gender-based violence in Anbar, Baghdad, Basra, and Nineveh governorates.

The new commitment will focus on increasing access to services for gender-based violence survivors by establishing new women protection centres in Anbar, Basra and Mosul and refurbishing the existing women shelter in Baghdad.

The women protection centres and the shelter will provide women and girls in need with medical, psychosocial and legal support as well as livelihood sessions to support their reintegration into society or reconciliation with their families.

Speaking during the event, the Minister of Labour and Social Affairs, Dr Adel Al-Rakabi, called on partners to support the Ministry in creating a solid infrastructure to protect and assist survivors of gender-based violence. He highlighted the need to establish similar centres in other governorates and have systems that address the root causes of gender-based violence.

For his part, the Ambassador of France to Iraq, Dr Eric Chevallier, said: "I set the issue of GBV at the top of my priorities. France has been working to find ways to support UNFPA's programmes against gender-based violence in Baghdad and across the country, in partnership with dedicated local NGOs. I call on the new parliament and the future government to put this issue high on their agenda to ensure that women and girls have the opportunity to thrive and become stronger contributors to society".

UNFPA Representative to Iraq, Dr Rita Columbia, thanked France for its trust in UNFPA and called the Government of Iraq to endorse legislation that protects women and girls from violence.

"We are grateful to the French Government, represented by the French embassy in Iraq, for supporting Iraqi women and girls to live lives free of violence. The establishment of women protection centres is a step forward in the path against gender-based violence in Iraq. They should become an integral part of the Government's response to gender-based violence to make sure that women and girls have a safe haven to seek protection," she added.

UNFPA will work closely with local authorities, the Women Empowerment Department and relevant ministries to support the implementation of the proper legal framework and standard operating procedures to ensure a survivor-centred approach when dealing with survivors.