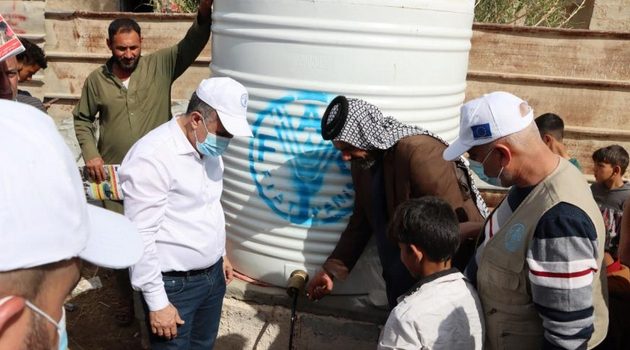 By Editor on 2nd March 2022 in Agriculture

As part of the efforts to support farmers in Iraq, FAO, in cooperation with the MOA/DOA Najaf al Ashraf Governorate, has started distributing molasses in Um Khashem / Al-Mishkhab District to livestock producers in order to improve livestock nutrition and mitigate high feed costs.

During the inauguration ceremony, FAO representative in Iraq, Dr. Salah El-Hajj Hassan, accompanied by Mr. Munim Shahid Hussein, Director of Najaf al Ashraf Agriculture, pointed that FAO started today distributing molasses to more than 600 buffalo farmers owning more than 20,000 buffalo heads in the region of Um Khashem to improve the nutrition of their livestock after the increase in feed prices.

This intervention is one of several interventions under "capacity building project to empower women and pioneer farmers in activities related to livestock in the governorates of Najaf al Ashraf - Karbala", which was initiated by the Food and Agriculture Organization (FAO) in close cooperation with the Ministry of Agriculture.

After the opening, the FAOR visited several farmers and observed the most important challenges facing rural women in processing the dairy products.

The implementation of these interventions was preceded by a field survey conducted by the project team, through which the most important obstacles and problems facing livestock breeders in the targeted areas were identified, and the lessons learned and achieved from the livelihood support project funded by the European Union and implemented in Nineveh Governorate and transferred to the governorates of central and southern Iraq.

It is noteworthy that the Um Khashm area is considered the first source of buffalo milk for the Najaf al Ashraf Governorate and the neighboring governorates.