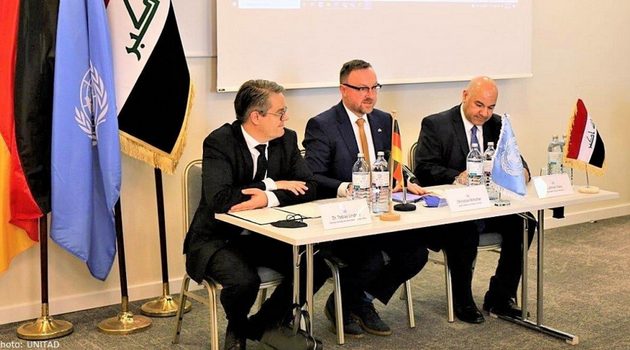 The United Nations Investigative Team to promote accountability for crimes committed by Daesh/ISIL (UNITAD) joined by the Embassy of Iraq to Germany and the German Federal Foreign Office co-hosted a special event on Investigating Financial Dimensions of War Crimes, Crimes against Humanity, and Genocide today in Berlin, Germany.

"With thanks to the generous financial support from Germany, UNITAD established a dedicated Economic Crimes Unit (ECU) to support the work of the Team in relation to the financial aspects of crimes falling within UNITAD's mandate", explained Special Adviser and Head of UNITAD Christian Ritscher. "This enabled UNITAD to investigate the complex financial structures that were central to ISIL/Da'esh as an organization which maintained a huge bureaucracy, and used massive resources to commit heinous international crimes."

H.E. Mr. Lukman Faily, Ambassador of Iraq to Germany, stressed in his opening remarks that "the importance of the continuity of UNTAD's work inside Iraq and on the international arenas such as Germany, as it reflects the Iraqi and global will to hold ISIL/Da'esh accountable, reveal its sources of funding, its support, and its effects, and also to eliminate ISIL/Da'esh as a transnational terrorist entity."

In his address, Minister of State of the German Federal Foreign Office, Dr. Tobias Lindner, emphasized the importance of UNITAD's work to hold ISIL/Da'esh members accountable for their crimes: "accountability is the key to successful reconciliation in post-conflict-societies. Impunity - on the other hand - destroys the social fabric of a society. This is the reason why we encourage partners to adopt the concept of universal jurisdiction and to make ample use of it."

The Special Adviser further commended Iraq's commitment to support the mission of UNITAD, and the facilitation of the Team's investigations towards the common goal of ensuring accountability for ISIL/Da'esh international crimes. At his end, Judge Raed Hameed, Deputy Head of the Ninewa Federal Appeals Court and one of the main Iraqi Investigative judges working on ISIL/Da'esh crimes provided an overview on his investigative work and the ongoing cooperation with UNITAD in this regard.

UNITAD has been able to complete initial lines of inquiry across ISIL/Da'esh's various revenue streams, with a focus on ISIL/Da'esh's central treasury (Bayt Al Mal). This progress was built on engagement with Iraqi national authorities which included close collaboration with the Iraqi judiciary, as well as with regulatory bodies such as the Iraq Anti-Money Laundry and Counter-Terrorism Financing Office.

During the special event, UNITAD provided an update on investigations into ISIL/Da'esh's oil trade and the trafficking in Antiquities, inextricably linked together through ISIL's own design under the Diwan Al Rekaz (Ministry of Buried Resources), and exploring ISIL/Da'esh's exploitive taxation schemes, focused on collecting wealth, property, and personal possessions from a range of targeted minority groups.

Discussions also were prompted by valuable insights presented by Ms. Nina Jørgensen, Professor of Public International Law-University of Southampton on the international legal framework presently available to holding financial actors accountable for their role in the commission of international crimes. Those present reaffirmed, in their discussions, the importance of further enhancing international cooperation to track and hold accountable the individuals who facilitated and financially benefited from ISIL/Da'esh crimes in Iraq.