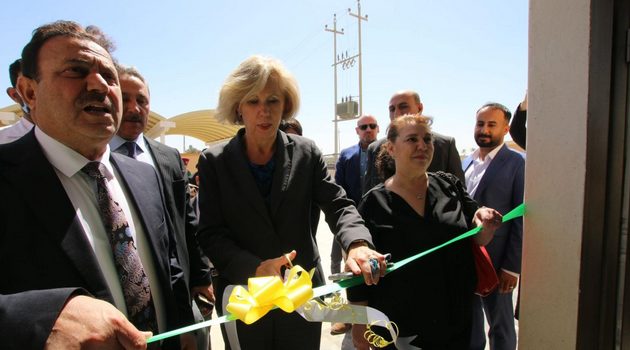 Health facilities in Al-Karma officially reopen after destruction by ISIL

When ISIL captured Al-Karma, the health facilities across the region suffered extensive damages. Equipment was stolen and infrastructure was left destroyed. Prior to rehabilitation of the health facilities, residents were forced to travel more than fifteen kilometers to Fallujah Teaching Hospital for treatment and medical services.

The two facilities were rehabilitated by UNDP's Funding Facility for Stabilization (FFS) with generous funding provided by the Government of Australia.  In addition, the Government of Denmark provided furniture and USAID supplied equipment to the Al-Sijr Public Health Centre.

"The reopening of the External Consultancy Clinic and Al-Sijr Public Health Centre in Al-Karma is an important milestone to restoring essential health services across the region. However, our commitment to building Iraq forward better and stabilizing areas affected by ISIL do not end here. We have also supported the rehabilitation of over 50 health facilities in Anbar alone. This includes clinics, public health centers, hospitals and even specialty hospitals such as maternity and dental clinics," says UNDP Resident Representative in Iraq, Zena Ali Ahmad.

"We are here today because of the generous funding and longstanding partnership with the international community. The rehabilitation of the two facilities would not have been possible without the support provided by the Government of Australia. I would also like to thank Government of Denmark for providing the furniture and USAID for supplying the equipment at the Al-Sijr Public Health Centre," she added.

"Australia values our longstanding partnership with the Government of Iraq and UNDP and is proud to support recovery efforts in this country. The conflict with ISIL left severe damage to vital infrastructure and impacted the lives of many Iraqis, says Ms. Paula Ganly, the Australian Ambassador to Iraq.

"The Australian Government believes that access to adequate health care is a basic human right. The rehabilitation and functioning of these clinics will provide essential health services to Karma district and surrounds," she added.

Since 2015, through the Funding Facility for Stabilization, UNDP has completed around 3,100 stabilization projects across the liberated areas of Anbar, Diyala, Kirkuk, Ninewa, Salah Al-Din.  To date, the programme has supported the return of more than 4.8 million people back to their place of origin.