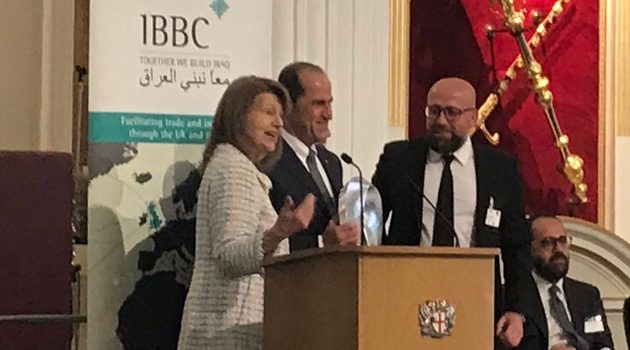 At the IBBC's Spring Conference in London's Mansion house, which was attended by nearly 300 delegates, Baroness Nicholson presented the 'Infinity Medallion' to group Chairman and CEO, Mr Sardar al Bebany.

Based in Baghdad, Sardar Group has a long history in the automotive sector in Iraq, and represents international brands including Jaguar Land Rover and Toyota.

The award was set up in honour of Rasmi al Jabri, who died in 2020, and who worked tirelessly for many years to support Iraqi businesses and foster Anglo-Iraqi relations as an IBBC Board Member, Deputy Chairman and Member Representative in Iraq.

Open to all Iraqi-owned enterprises operating in Iraq, the award recognises excellence in performance and governance, and in the promotion of business partnerships between Iraqi and British companies.

This is the second time that the prize has been awarded, with Al Burhan Group winning the inaugural prize last year.

The medallion was designed by Charles Walker of Zaha Hadid Architects (ZHA).