By Editor on 6th June 2022 in Ahmed Tabaqchali, Investment

"Sandstorms, and a stroll down Al-Mutanabbi Street"

The market, as measured by the Rabee Securities RSISX USD Index, was down 6.0% for the month, and up 1.7% for the year.

Last month's bout of profit taking continued throughout the month; however, the market's technical picture continues to be positive with the RSISX USD Index's two-month declines have only taken it to within the middle of its two-year up-trending channel (chart below) - an uptrend that ended a brutal multi-year bear market.

While there is the potential for the index to decline further, the macroeconomic fundamentals discussed last month support the thesis that the two-year uptrend should continue even if the upward slope moderates somewhat.

This picture contrasts favourably with other markets, which underscores its attractive risk-reward profile and diversification benefits versus these markets, especially considering that Iraq's economy, unlike most economies worldwide, is a significant beneficiary of the current high oil price environment. 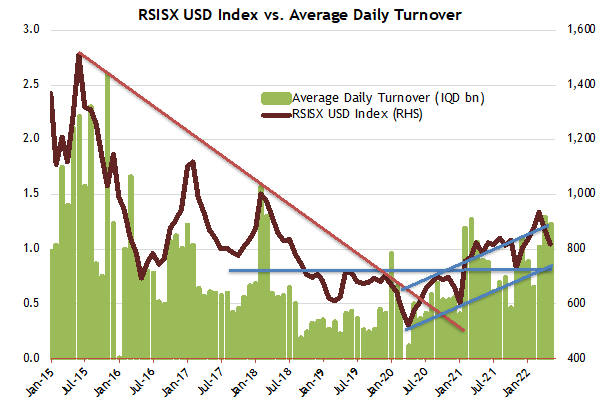 Almost all of the index's constituents were down with the exception of the Bank of Baghdad (BBOB), which was flat for the month. The worst performing constituent for the second month in a row was the National Bank of Iraq (BNOI), down 19.2%, followed by Baghdad Soft Drinks (IBSD) and National Chemical and Plastics Industries (INCP) both down 7.8%, Al-Mansour Pharmaceutical Industries (IMAP) down 6.4%, Al Mansour Bank (BMNS) down 6.1%, the Commercial Bank of Iraq (BCOI) down 3.6%, Al-Kindi of Veterinary Vaccines and Drugs (IKLV) down 2.6%, Kharkh Tour Amusement City (SKTA) down 2.2%, and Asiacell (TASC) down 1.8%.

Iraq's risk-reward proposition, both in absolute terms and relative to other markets, is compelling as its economy is a huge beneficiary of the high crude oil price environment, while its equity market is in the very early stages of emerging from a multi-year bear market, and as such its risk-reward profile is very attractive against most global markets

Sandstorms and a stroll down Al-Mutanabbi Street

Since mid-April, Iraq experienced nine sandstorms, versus the usual three in any given year, with the ninth on May 23rd so severe that the government declared the day a public holiday ahead of the storm's arrival and required airports to be shut. The storm, when it arrived, engulfed the country in sand, turned Baghdad's sky orange, and catapulted the city to Mars (picture below *).

Early morning in Baghdad during the last storm in May 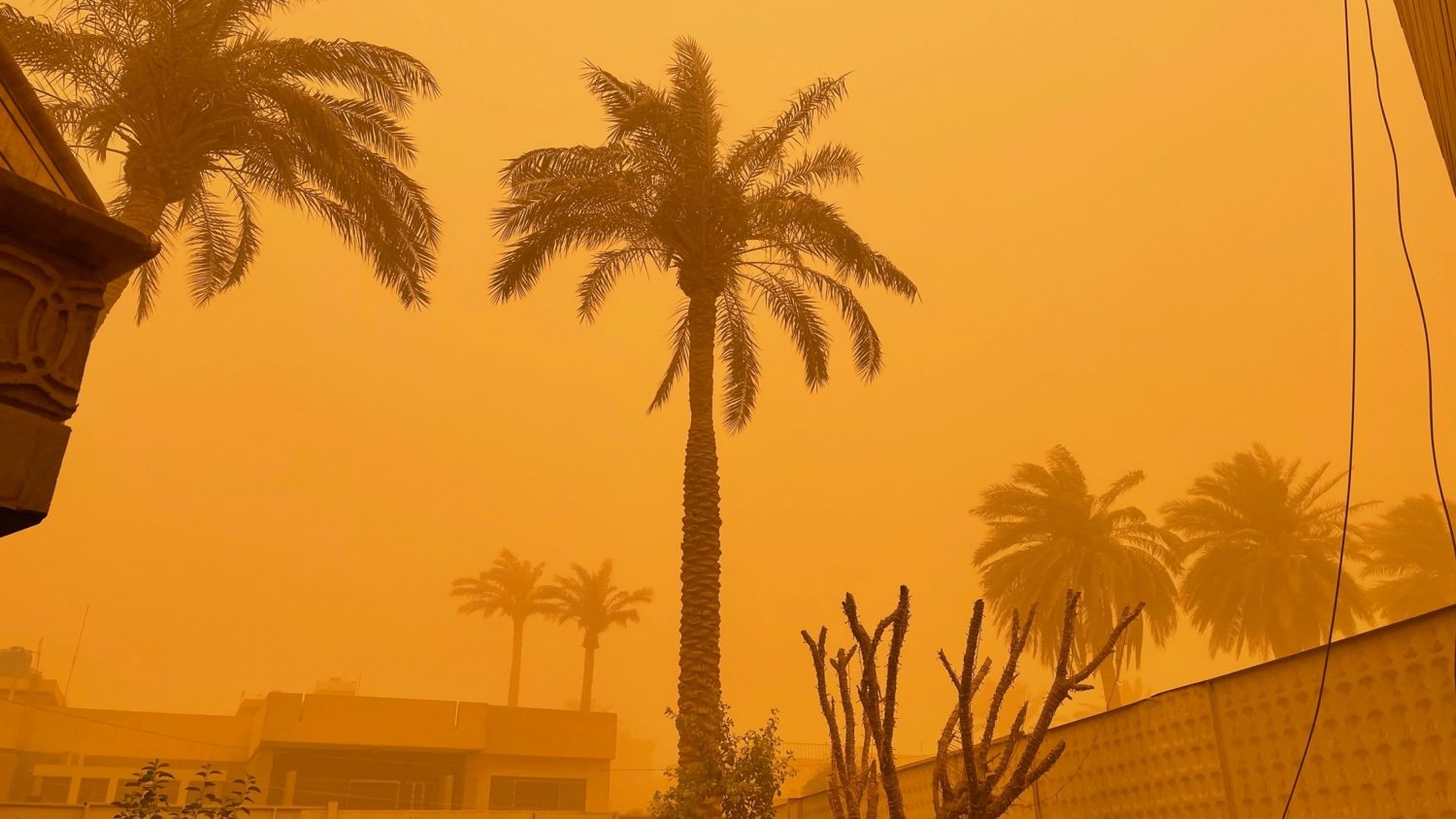 While the storm disrupted economic activity, life in Baghdad soon returned to normal and the sand was mostly washed away, as experienced a few days later on a Friday stroll down Al-Mutanabbi Street - Baghdad's intellectual, literary, and cultural heart; named after the legendary Abbāsid-era poet Al-Mutanabbi (915-965 A.D.). The street is jam-packed with traditional booksellers displaying all kinds of books both in outdoor stalls and in bookstores - an embodiment of the old Arab saying, "Egyptians write, Lebanese publish, Iraqis read."

When temperatures rise in the summer, the street comes to life in the evenings, but Fridays have always been special irrespective of the season. As the first day of the weekend, many of the roads approaching the street are closed to traffic and the street is best approached from the Tigris River side either by boats next to the Al Shuhada'a (Martyrs) Bridge or by walking over the bridge itself.

On this particular Friday, the route to Al Shuhada'a Bridge passed through Haifa Street - originally cut as a stylish residential street in 1981 out of one of Baghdad's historical areas, as the city went through a massive transformation in the early days of the Iraq-Iran war. The regime then, embarked on a "Guns and Butter" policy to insulate the city's population from the ravages of the war, but eventually abandoned the policy as costs mounted and the war dragged on. Haifa Street changed from a sought-out location to the much-feared Death Street in the years following the US invasion in 2003, when it was effectively controlled by insurgents during the worst of the sectarian civil war in 2006-2007. Aspects of the street's bloody era were dramatized in the 2019 movie "Haifa Street". Today, the street is restored to its former self and is one of many examples of the post-conflict transformations of the country.

Haifa Street, on the way towards, Al Shuhada'a Bridge 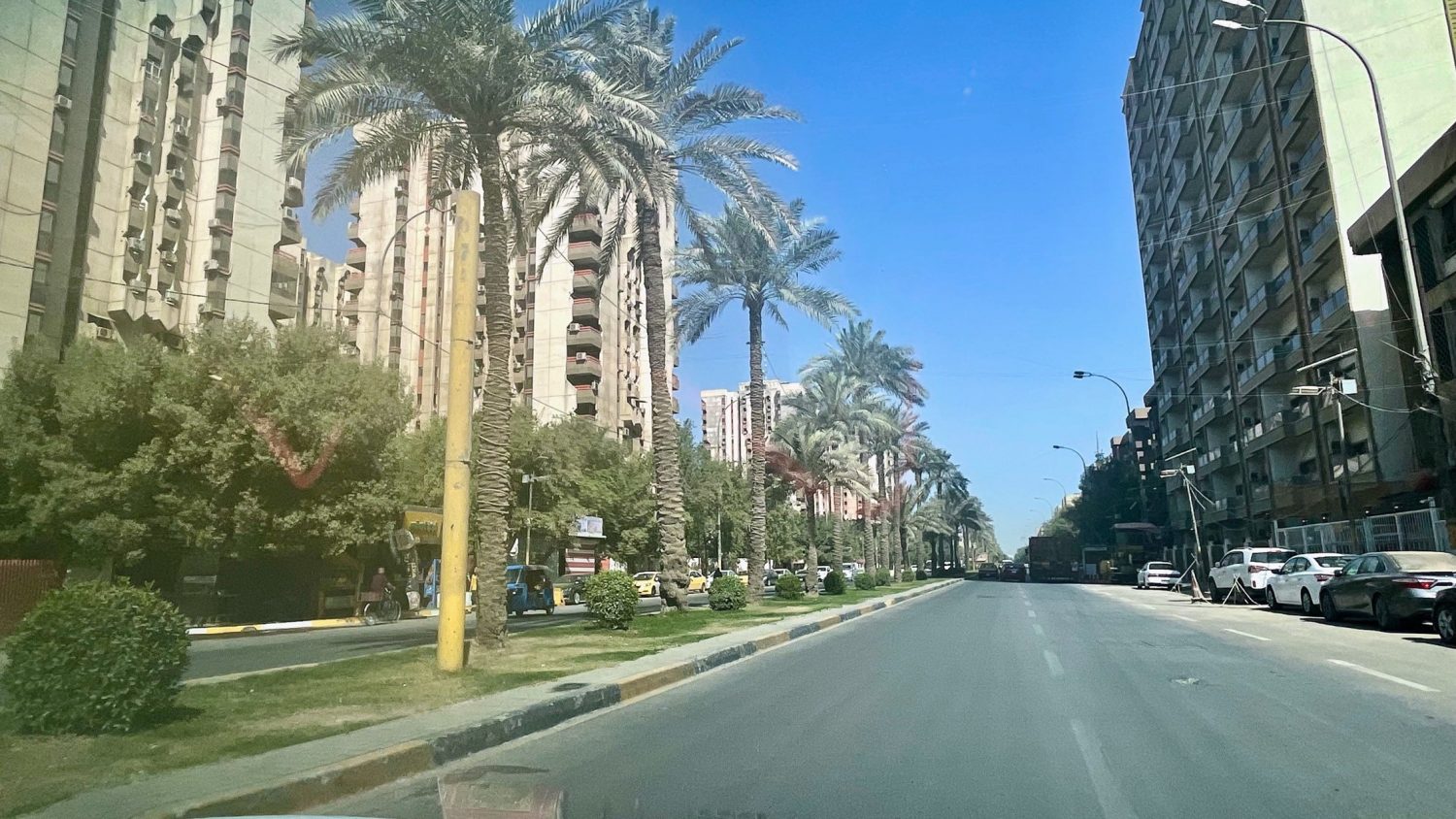 Al-Mutanabbi can be thought of as an intellectual, literary, and cultural complex composed of the street itself, the Baghdadi Cultural Centre, and Al-Qishla compound.

The view of Al-Qishla compound with the Clock Tower on the left, the riverside end of the street opposite the stairway from the river crossing. The Baghdadi Cultural Centre, while not in photo, is on the right 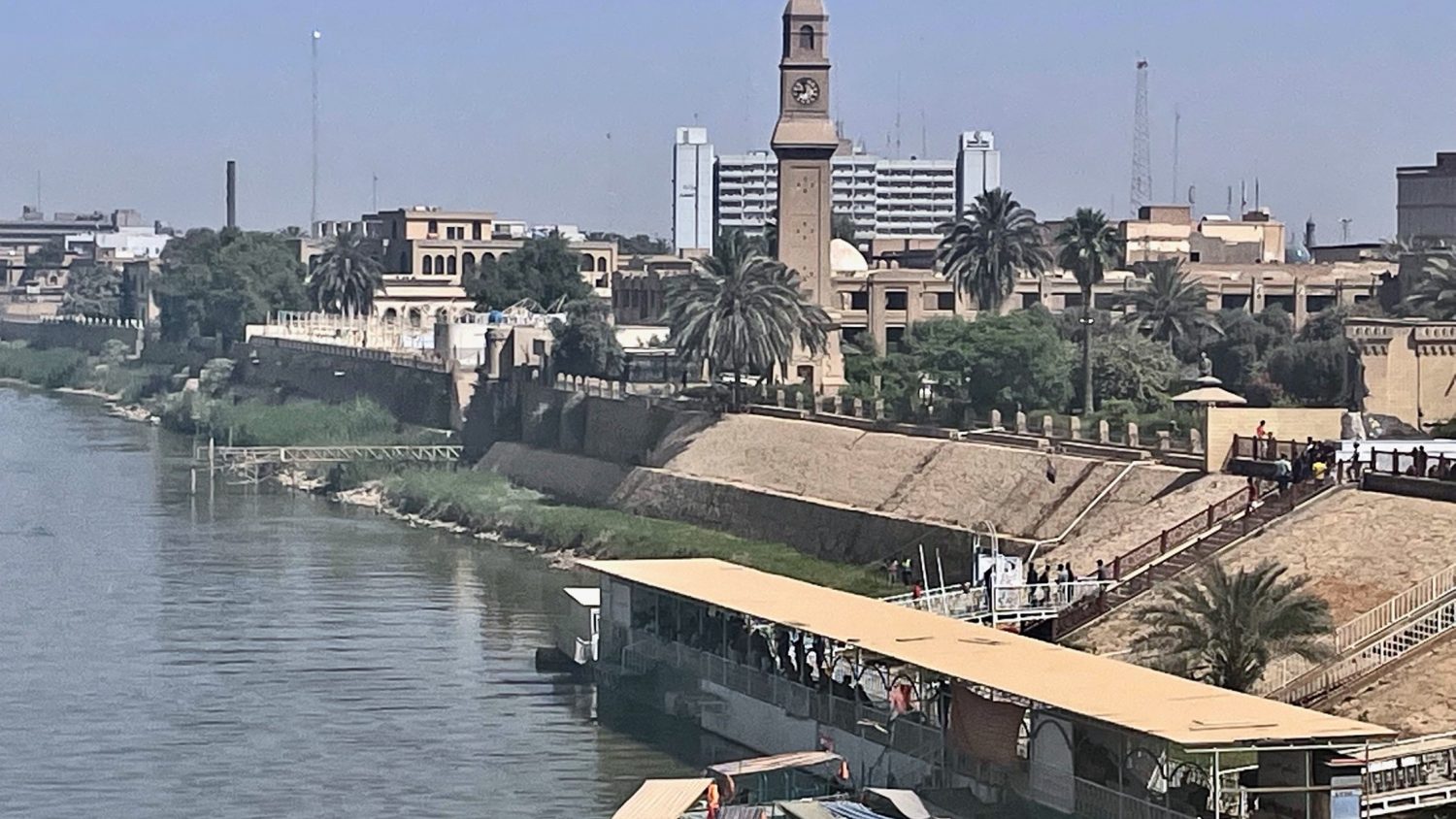 Early in the day on Friday, when the daily temperatures ranged between 25-41 degrees centigrade, the street was teaming with people of all ages and walks of life who ignored the scorching heat in their pursuit of books and cultural satisfaction.

Al-Mutanabbi Street, near the Tigris end 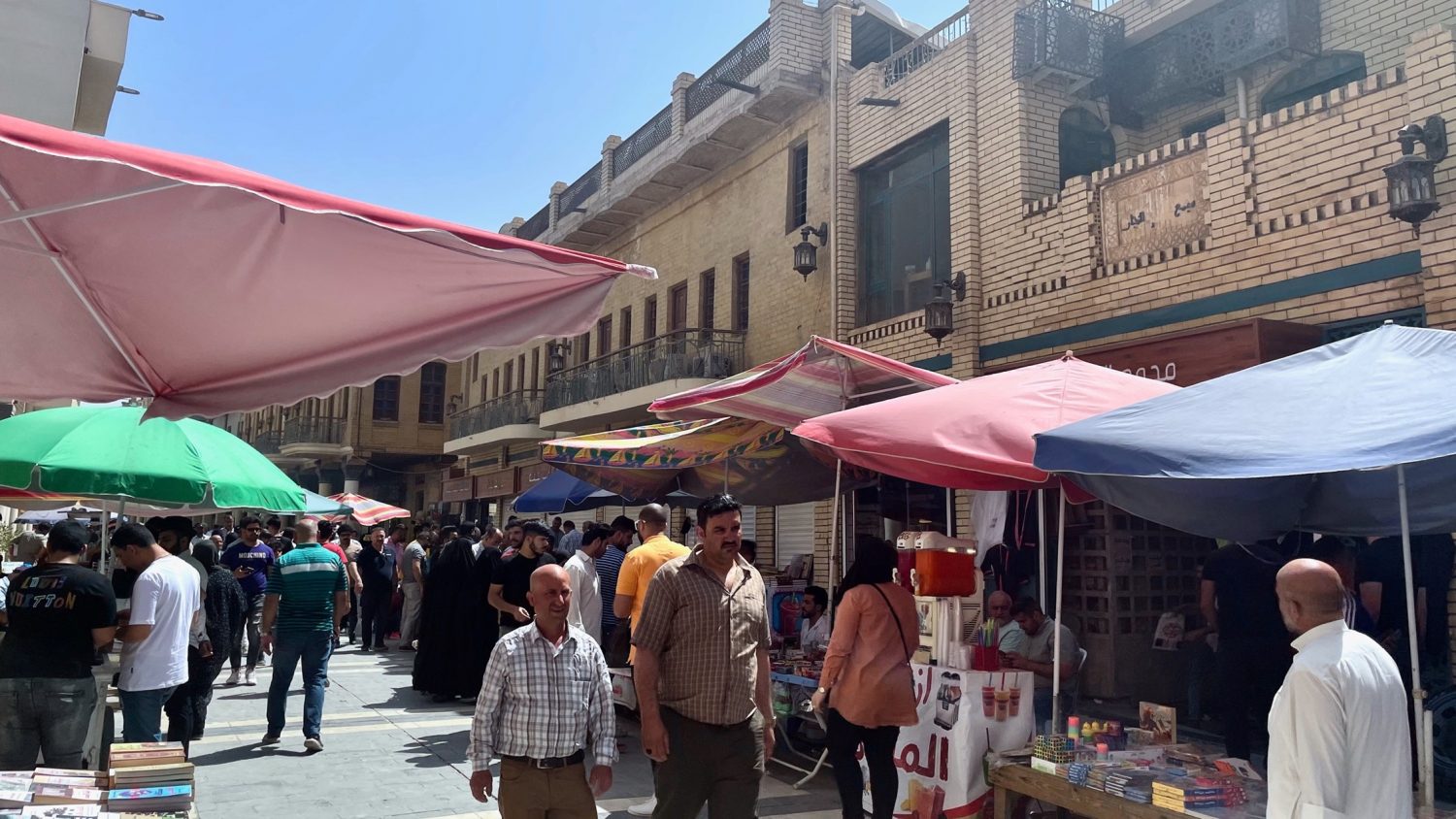 AFC's August 2019  Iraq travel report reviewed Al-Mutanabbi and its famous Shabandar Cafe  writing  " ... the Café personifies the street and Iraq's revival - in 2010 a car bomb almost destroyed the café, killing thirty people including the owner's four sons and grandson. However, Mohammad al-Khashali, reopened the café soon after and insisted on maintaining its open-minded culture as a home to Iraqi writers and intellectuals from all faiths for generations, even during the darkest years of sectarian warfare".

The Baghdadi Cultural Centre, across the street from the Shabandar Café, was restored to life in 2011 as a cultural centre in a move that seemed to defy the bombing of the café earlier in 2010. Initially known as Daftar-Khana (House of Records) during the Ottoman rule, the centre was transformed into its present form as Al-Rashdiya Military School in 1869. Since then, the school graduated many of Iraq's top officers who played leading roles in the country's modern history.

The school was converted to a hospital during WWI, after which it became the headquarters of the civil courts in 1919 following the British occupation of Iraq. It eventually included the headquarters of the criminal courts after the establishment of the Kingdom of Iraq in 1921. It continued in this role until 1978, after which it became a historic site. In the mid-to late 1990's it transformed into a religious centre during the Return to Faith campaign as the regime pursued an Islamist agenda in its pursuit of legitimacy during the brutal sanction years and the devastation they brough to the population. It was neglected and left to decay in the years following the U.S. invasion in 2003 until its restoration in 2011.

The courtyard of the Baghdadi Cultural Centre 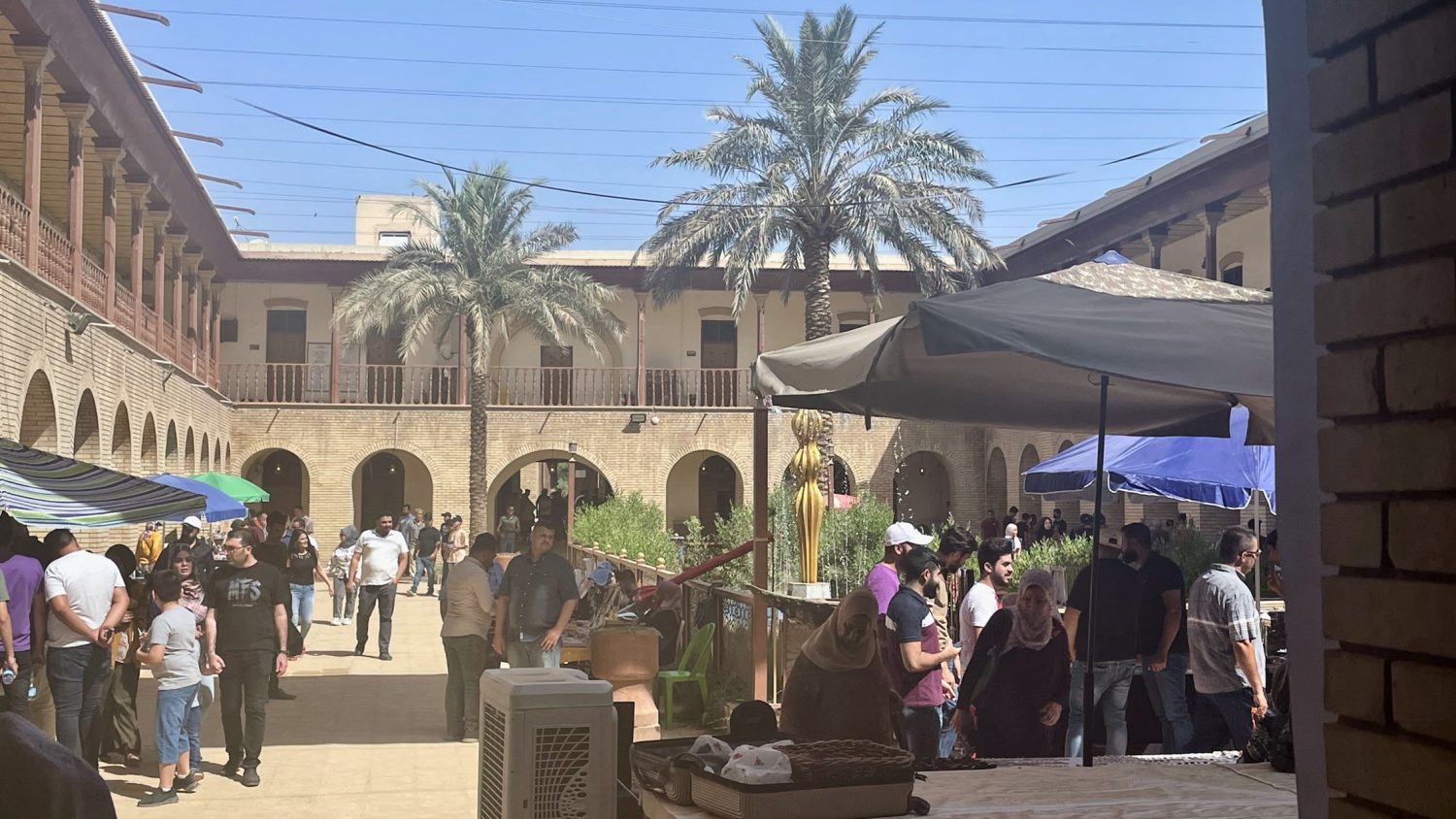 Al Mutanabbi's spirit comes to life in Al-Qishla compound with poets, artists and intellectuals picking spots to express themselves surrounded by interested crowds ­- very much like the well-known Speakers Corner in London's Hyde Park. The compound was the site of Al Mowafaqia School from the early thirteenth century; the Ottomans began construction of its main building in 1861 to serve as an administrative centre, and barracks - with the Turkish word Qishlaq for barracks giving rise to the compound's current name. A few years, later the building was expanded, and a tower was added using bricks reclaimed from the demolition of the eastern section of Baghdad's historic city wall - in an all too familiar pattern of destroying the old to build the new throughout the city's history. In 1927, a clock was added to the tower as a gift from the U.K.'s King George V to Iraq's King Faisal I, whose coronation in 1921 took place in the compound's courtyard. 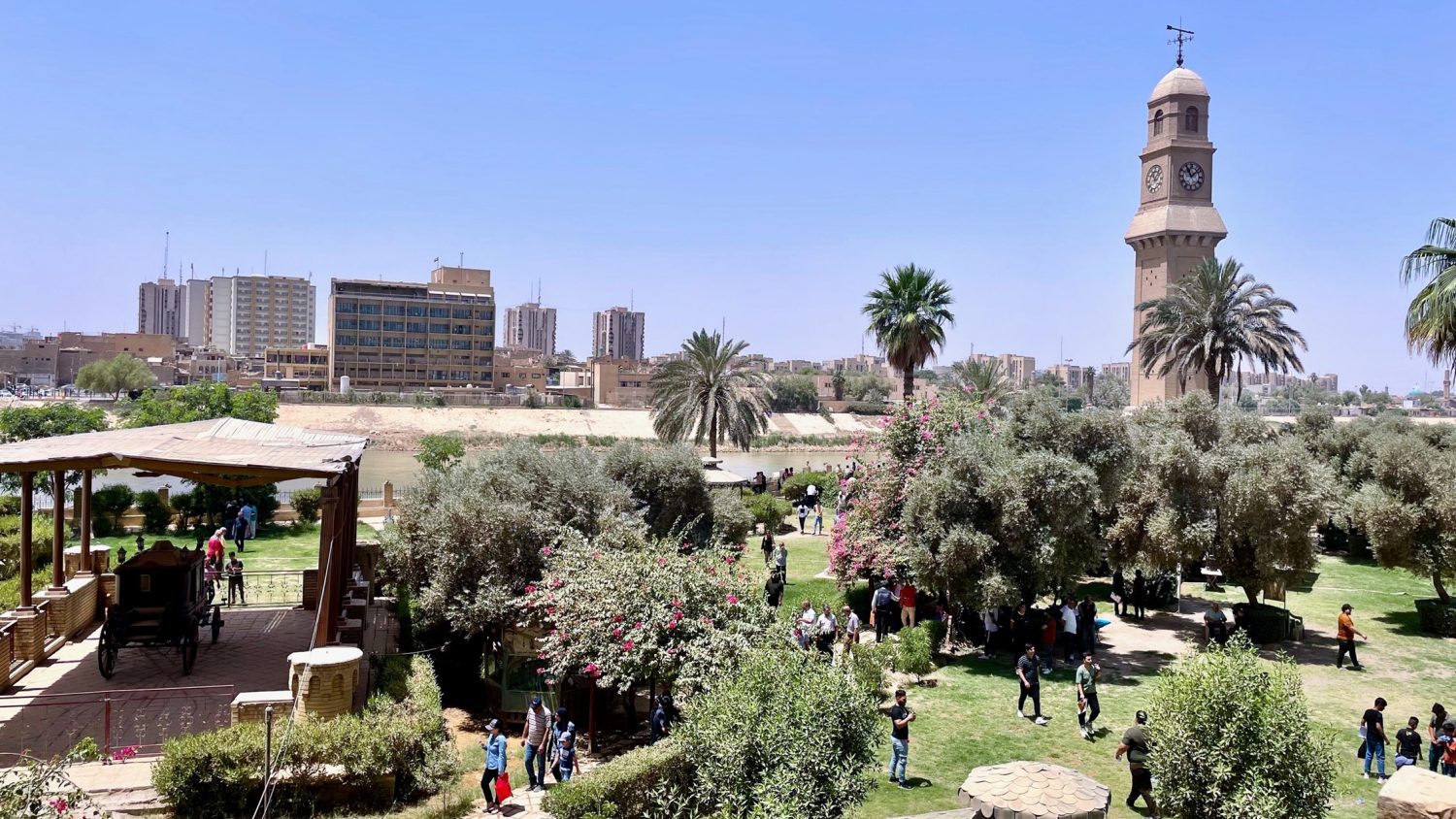 A young poet reciting in Al-Qishla's courtyard, with all too familiar site of reconstruction activity across the Tigris 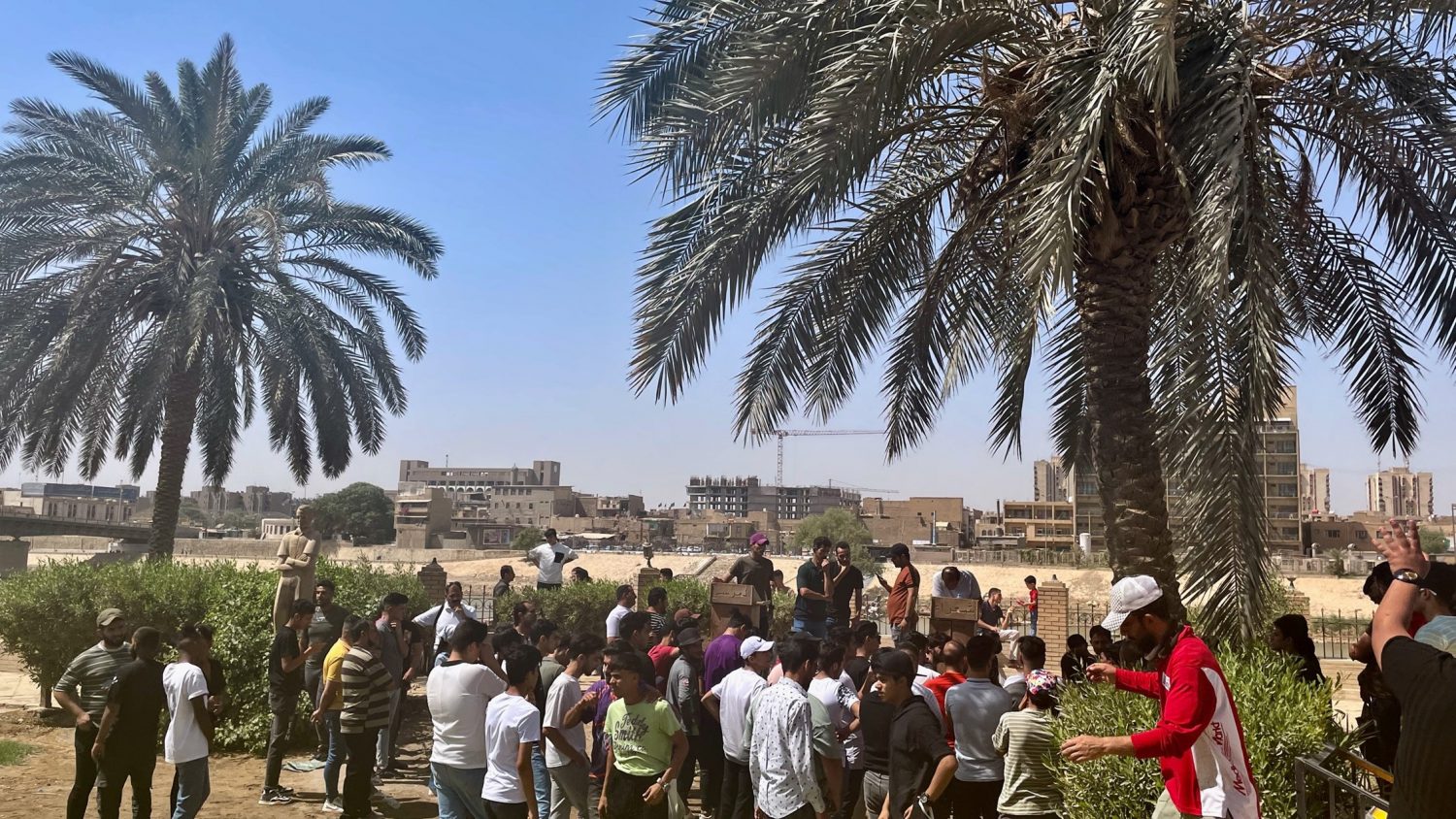 The tour of the street came to a conclusion by departing from the street's other end at Al-Rasheed Street - first opened to the public under the last days of the Ottomans in 1916. The street acquired its current name in 1936 in homage to Baghdad's golden age under the rule of Hārūn al-Rashīd (786-809 A.D.) - the fifth caliph of the Abbāsid dynasty. True to its namesake, the street as Baghdad's artery, was at the heart of the country's evolution encompassing all aspects of life from art, culture, architecture, politics, and commerce - but its story deserves its own report. 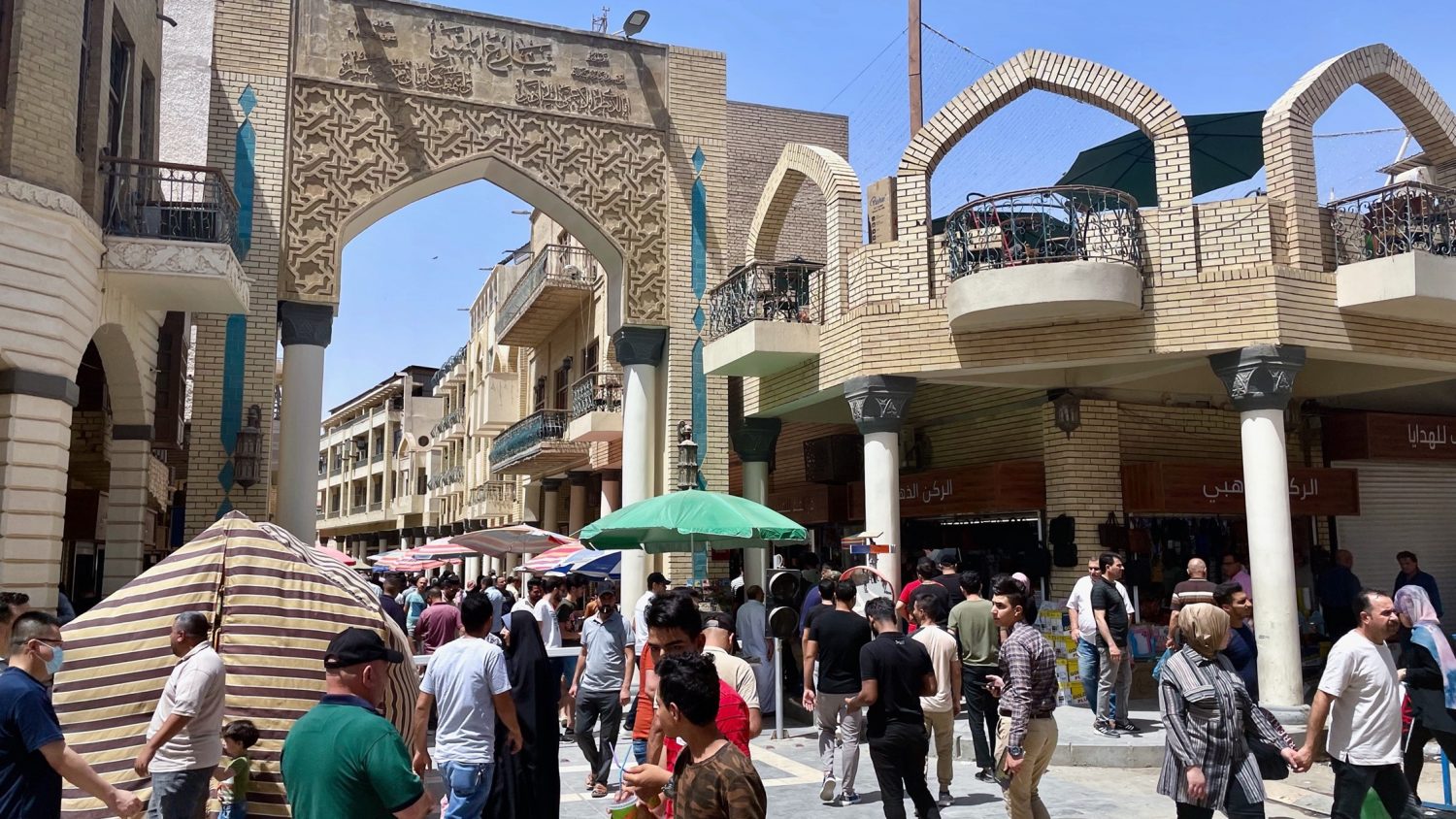 Walking in Al Rasheed Street towards Al-Mutanabbi, whose entrance is in the middle-left 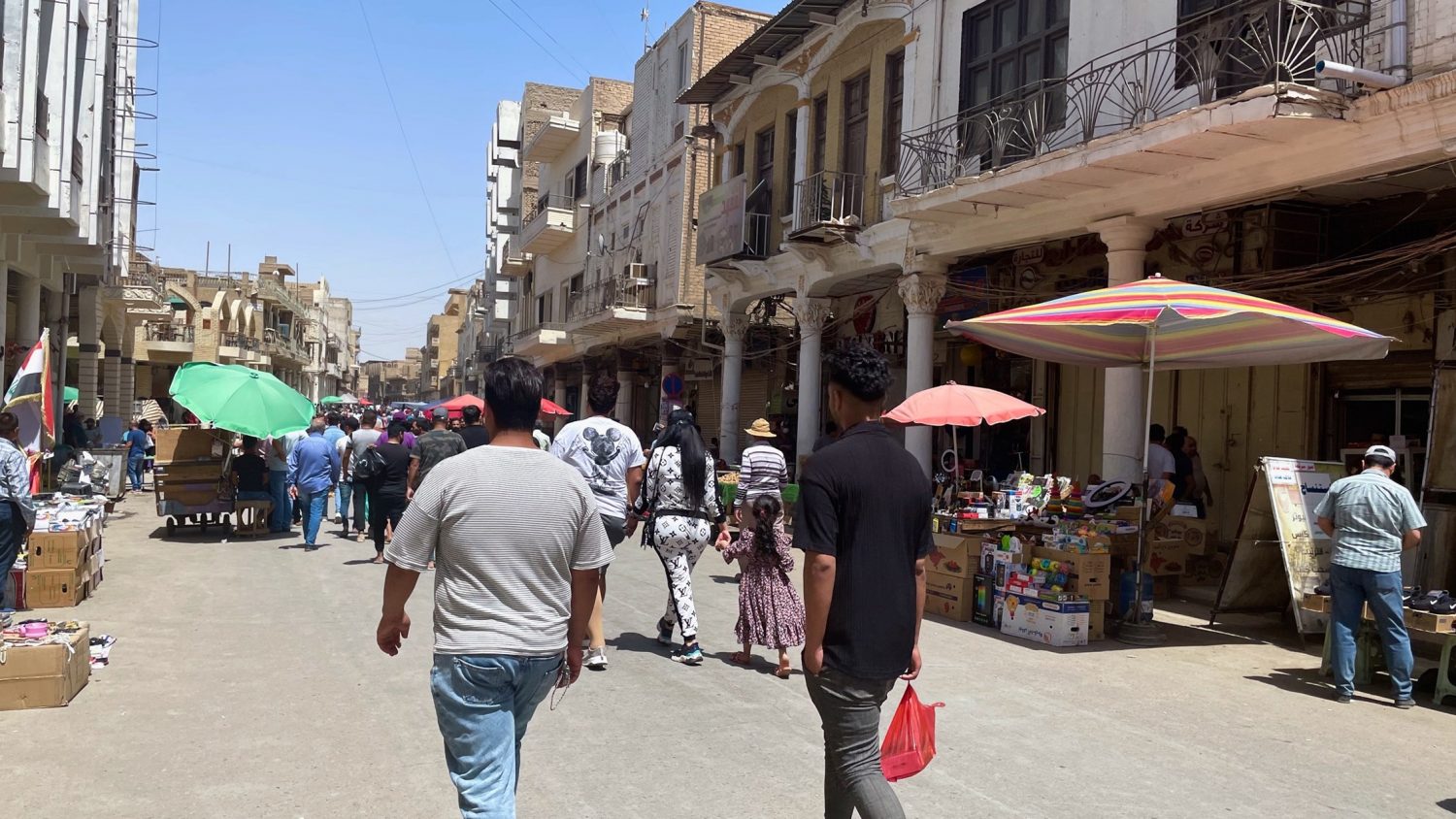