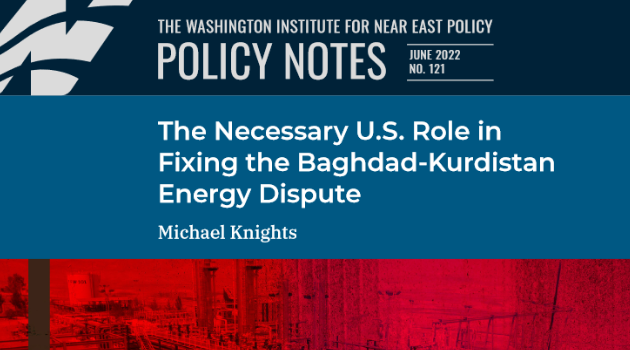 The Necessary U.S. Role in Fixing the Baghdad-Kurdistan Energy Dispute

On February 15, 2022, Iraq's Federal Supreme Court ruled that the 2007 oil and gas law for the Kurdistan Region was unconstitutional, requiring a review of numerous production sharing contracts and oil sales agreements.

If the case prevents oil exports via Iraqi Kurdistan, then the world market will almost immediately lose 500,000 barrels per day, triggering higher oil prices, expanded windfalls for Russia and Iran, the collapse of Iraqi Kurdistan's economy, and a dangerous turn in Baghdad's ties with Erbil and with Ankara.

In this timely Policy Note, Iraq expert Michael Knights calls for the United States to act with other concerned states to resolve the Baghdad-Erbil energy crisis. In doing so, he categorizes the sub-issues of FSC implementation on a spectrum from higher to lower consensus, and explains both sides' views in an unvarnished, direct manner.

A targeted intervention by the United States and its partners, the author argues, could guide the dispute toward a long-overdue resolution that greatly aids U.S. interests and the global effort to find a substitute for Russian and Iranian oil and gas.