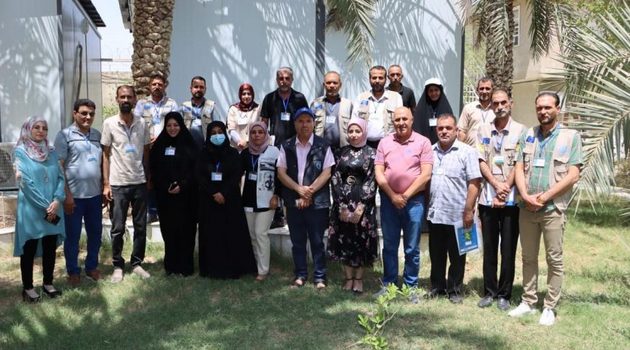 By Editor on 12th July 2022 in Agriculture, Iraq Education and Training News

Through EU support, FAO Iraq concluded a training on climate-smart livestock practices in the south

The Food and Agriculture Organization of the United Nations (FAO) in Iraq through the European Union funded project and, in collaboration with the Ministry of Agriculture (MoA), concluded a two-day training for 20 extension workers from Basra, Missan and Dhi Qar governorates.

This training was held under the "restoration and strengthening the resilience of agri-food systems in Southern Iraq" project to empower the small farmers and vulnerable rural families in the three targeted governorates through the development of crop and livestock value chains.

The training will enable to develop training curriculum and strengthen capacities by coaching the participants on methodologies to be applied as part of Training for Trainers (ToT) and Farmer Field Schools (FFS) to support ultimately the capacity of 6000 livestock producers in Basra, Dhi-Qar and Missan.

FAO Iraq Representative Dr. Salah El-Hajj Hassan said, "We are working to strengthen the agricultural sector in Iraq and to create job opportunities for the rural families."

"FAO has responded to the impact of drought season resulting in water decrease, increase of salinity and of feed prices in the Iraqi Marshes by purchasing 5000 tons of feeds including 1000 tons of wheat bran, 1000 tons of corn maize silage and 3000 tons of sugar molasses to support the buffalo breeders in the region. These efforts wouldn't have been possible without the generous contribution from the European Union and the close partnership with MoA", Dr. El-Hajj Hassan added.