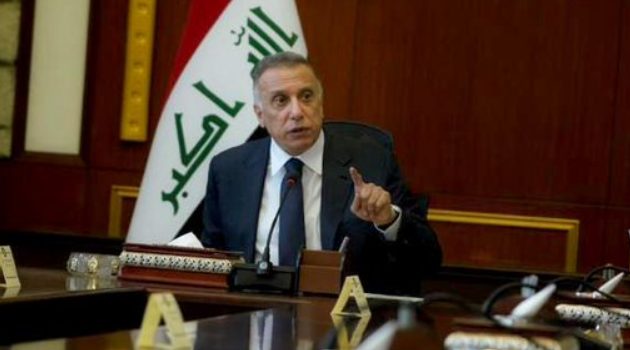 Writing in Foreign Policy, Iraqi Prime Minister Mustafa al-Kadhimi says that after leaning heavily on the United States, Iraq is finding its own footing.

On Biden's Middle East Visit, He Will See a New Iraq at the Table

Summary of the main points of the article, according to the Media Office of the Prime Minister:

English, below (via Google Translate):

I will represent a recovering Iraq that stands with greater confidence on the international stage stronger than it has been since President Biden's last visit in 2016, or even more than when we met in the Oval Office last year.

The United States has had a significant role in supporting Iraq over many years, and we are grateful for the help and sacrifices that Americans have made to support us. Today, Iraq is drawing its own path, locally, regionally and internationally.

What I hope Mr. Biden will realize after our meeting in Saudi Arabia on Friday is my personal determination, and the determination of the Iraqi people to solve Iraq's problems through Iraqi solutions.

Iraq is now a multi-party and multi-ethnic constitutional democracy. Yes, we are still in the protracted process of forming a new government after the elections last fall. The formation of the government took a long time, which has indeed frustrated many inside and outside Iraq.

I share that sentiment, but I am also proud of the state's ability to continue to serve Iraqi citizens, protect our natural resources, and play a leading role in regional initiatives that advance prosperity and security.

Nearly two decades have passed since the elections were called, which is a great evidence of the extent to which democracy has been entrenched in Iraq after more than three decades of Saddam's brutal dictatorship; This is a success story that cannot be overlooked.

The political difficulties that result from the elections are an example of the confused conditions that democracy sometimes produces, and confirm the need to consolidate the principles of democracy in Iraqi public life, and to ensure its sustainability in a way that is not limited to the ballot boxes.

The path towards a successful democracy requires time, will and leadership. With our two feet after the expulsion of ISIS from our land, today we can look towards better prospects, as our country is no longer a passive member of the international community; We are now active at the regional and international levels, including the initiative to host the multilateral summit aimed at strengthening regional cooperation and stability.

Last year, Iraq hosted the Baghdad Conference for Cooperation and Partnership with the leaders of Jordan, the United Arab Emirates, France, Qatar, Kuwait, and Egypt, with the participation of ministers from Turkey, the Islamic Republic of Iran, and Saudi Arabia.

The conference discussed security, economic, and environmental issues whose solutions require goodwill, sincere participation, and cooperation between states, through these and other initiatives, we were able to play a positive role in the region.

This is evidence of my government's commitment to spare no effort to achieve stability in our country and the region. While we seek to de-escalate tensions by bringing the various parties together, we also strongly support respect for each country's sovereignty and the need for non-interference in the internal affairs of other countries.

Our relationship with the United States has changed for the better, and while our historical cooperation revolved around security and combating terrorism, the relationship is now expanding to include other no less important societal challenges, such as: economy, energy, climate change, environment, health, education, and culture.

With progress made by Iraq, our strategic dialogue with the United States has also progressed, and the transition from the American combat role to another broad-minded form has taken place with a deepening of relations outside the security framework.

Our partnerships with the United States Agency for International Development and other American institutions provide us with influential support and technical expertise in our journey to build our country.

The main motive for this growth in the relationship was the Iraqi national need to invest in the repercussions of regional stability, economic development, environmental security, solutions to climate change, and food security.

Geographically, Iraq is located in the hottest regions in the world, and the most affected by climate changes, and concern about dust storms, high heat waves, drought, and lack of water supply has become the prevalent among our people compared to the terrorist threat.

But Iraq remains an important producer of oil at the international level, with huge reserves that are not fully explored, but this economic artery increases our environmental challenges.

Therefore, we are working quickly to invest gas that burns in oil fields, and we want to convert our strong sunlight into electrical energy that can support the development of our industries, and create jobs for our young generations.

Iraq has a lot to offer the region, whether in terms of economic integration, free trade opportunities or the stability of energy markets.

We have built bridges of important relations with countries such as: Jordan, Egypt, and the Gulf Cooperation Council, and we have begun to see tangible results for this improvement in relations in various forms, including the development of electrical interconnection with our Gulf neighbors as well as Jordan, the pivotal regional state.

At the end of last year, we completed the payment of the dues to the State of Kuwait, which resulted from the disastrous invasion carried out by Saddam in 1990.

There are problems that need to be addressed, foremost among which is that we, the Iraqis, strengthen the state's authority and control over the spread of uncontrolled weapons.

The problem of recovering weapons after they fell into the wrong hands suffered from the most powerful countries; In order to protect their democracies, and address them in Iraq will require Iraqi solutions that are sustainable and require strategic patience inside Iraq and from our partners.

The United States and our other international partners should look at and deal with the Iraqi issue from the perspective of the progress we have made, as well as should.