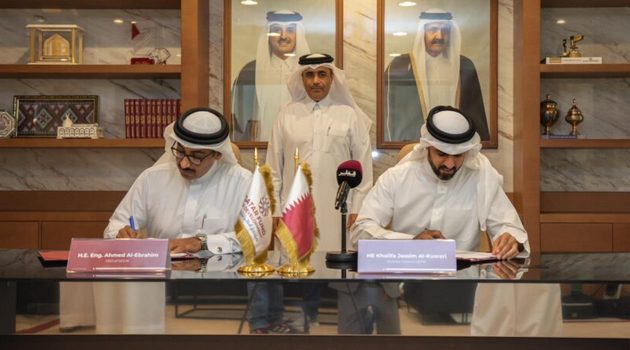 By Editor on 2nd August 2022 in Iraq Industry & Trade News

Qatar Fund for Development (QFFD) cooperates with the Gulf Cooperation Council Interconnection Authority (GCCIA) to develop the Gulf electricity interconnection system and connect it to the southern Iraq network.

QFFD signed an agreement with the Gulf Cooperation Council Interconnection Authority to develop the Gulf electricity interconnection system and to connect it to the southern Iraq network.

This agreement aims to contribute to cover part of the demand for electricity and fulfilling its need, as well as improving the performance and stability of the electricity network in the southern region of the Iraq Republic.

By constructing a new transformer substation with a capacity of about 400 KV in the Wafra area in Kuwait and connecting it to the Gulf electricity interconnection system to the Iraqi electricity network thorough Al-Faw electricity transformer station in southern Iraq.

"Together, in partnership with he Gulf Cooperation Council Interconnection Authority, we seek to extend electricity to our brothers in southern Iraq. As electricity support will play a fundamental and pivotal role in strengthening the vital basic sectors and supporting them to complete Its work, such as the health sector, which will in turn provide health services to a large number of patients, in addition to strengthening the educational sector such as schools and universities. This initiative will have a pivotal role in the economic contribution and infrastructure development."

His Excellency the CEO of the Gulf Electricity Interconnection Authority, Eng. Ahmed bin Ali Al-Ibrahim, that the electrical connection has achieved economic savings for the GCC countries of nearly 3 billion dollars since the full operation of the project, while avoiding any major interruptions in the Gulf networks since the start of operation in 2009, which has a significant impact on the continuity of electricity and its great impact on society and The economic and industrial sector in the GCC countries.

The project is being implemented by the GCC Electricity Interconnection Authority, which owns and manages the Gulf electrical interconnection network, and it is one of the most important infrastructure link projects approved by the Gulf Cooperation Council.

Among the benefits achieved by the project are reducing the required reserve in each country, mutual coverage in case of emergency, benefiting from the surplus, and reducing the cost of producing electric power among the GCC countries. Network connectivity operation.

The authority considers that the signing of the interconnection agreement with the electricity network in southern Iraq, which coincided recently with the Jeddah Summit for Security and Development on July 15, 2022, is one of the most important strategic projects in the GCC countries, which will start implementation work during the month of August, hoping to operate the connection with the summer of 2024.

It is worth noting that the Gulf Electricity Interconnection Project achieved its most important strategic objectives of enhancing energy security and raising the level of reliability and safety for the Gulf electrical systems, and its success in avoiding the GCC electricity networks for any partial or total interruption by 100% by providing instant support by transferring the required energy through the network The electrical connection directly, as more than (2,500) support cases have been supported since its operation.