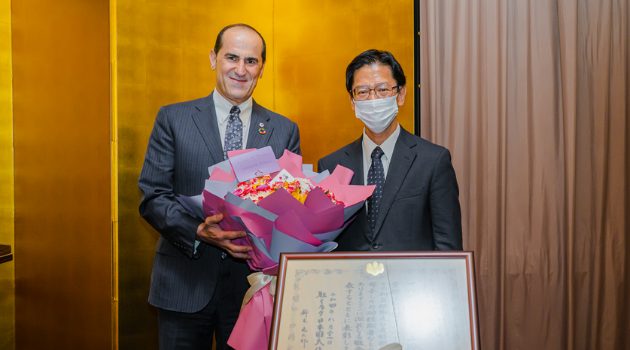 On August 21st 2022 Mr Sardar Bebany, Chairman of Sardar Group, was awarded the Certificate of Commendation by the Japanese Ambassador to Iraq.

The awarding ceremony took place in Erbil in the presence of senior businessmen, representatives of the Iraqi central and of the Kurdish gional governments and several international diplomats including Her Majesty's Consul General.

The Japanese Foreign Minister's Commendations are awarded to individuals and groups with outstanding achievements in international fields, to acknowledge their contributions to the promotion of friendship between Japan and other countries and areas.

Sardar Group represents Japanese brands Toyota Lexus, Hino, TOTO in Iraq as well as the UKs JaguarLandrover and the USs Polaris. The company is by far the most successful and innovative player in its field in Iraq and is widely recognised as such.

Mr Sardar himself enjoys a strong reputation for being a champion of the private sector in Iraq and for being on the forefront of bringing international standards and working ethics into the country. He is also a staunch advocate for strong friendly relations between Iraq and Japan and Iraq and the United Kingdom, based on friendship and understanding and the celebration of each others countries culture and tradition.

"It's a privilege for IBBC to see one of its leading Members honoured in such a way. Mr Sardar is a model for all businessmen and entrepreneurs and for all Iraqis who believe in and love their country. His outstanding success is proof of what can be achieved by the private sector in Iraq despite all challenges.

"We are proud to see that following IBBC awarding the Rasmi Al Jabri Award for Business Excellence to Sardar Group at The Mansion House earlier this year Mr Sardar is now receiving this high honour from the Japanese Government."