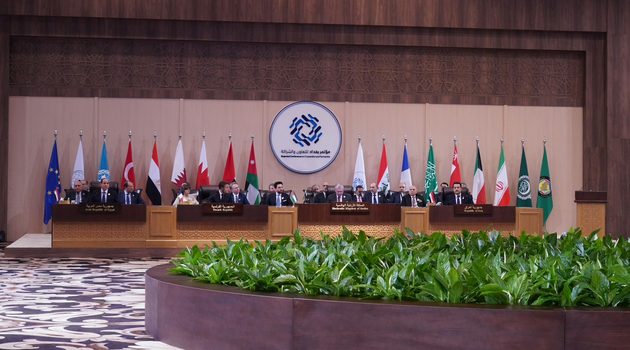 In light of the decision taken at the conference held in Baghdad on 28 August 2021, and at the invitation of His Majesty King Abdullah II, in coordination with His Excellency President Emmanuel Macron of the French Republic and His Excellency Prime Minister Mohammed Shia al-Sudani of the Republic of Iraq, the Hashemite Kingdom of Jordan hosted the Baghdad Conference for Cooperation and Partnership in its second round at the Dead Sea on 20 December 2022.

Participants in the conference expressed appreciation to the Hashemite Kingdom of Jordan for hosting the conference. Jordan and Iraq also thanked the French Republic for its role in coordinating the launch of the conference and participating in two rounds.

The participants reaffirmed the continuation of efforts to build on the outcomes of the first round of the Baghdad Conference and step up cooperation with Iraq, in support of its security, stability and sovereignty, as well as its democratic and constitutional processes, in addition to its efforts to promote dialogue as the means to resolve regional differences. They also underscored their solidarity with Iraq in the face of all challenges, including terrorism, over which Iraq, through great sacrifices and with international and regional cooperation, achieved a historic victory. The participants reaffirmed their condemnation of extremism and terrorism in all its forms.

The participants renewed their support for Iraq in its efforts to bolster the Constitution, the rule of law, and good governance, while building institutions capable of proceeding on the path towards further progress, reconstruction, safeguarding achievements, and meeting the aspirations of its people.

The participants stressed their support for Iraq's efforts to achieve comprehensive development, and working with it to build economic integration, by cooperating across a multitude of sectors, including energy, water, electric connectivity, food and health security, transportation, infrastructure and climate action.

In this context, the participants highlighted the importance of the trilateral cooperation framework between Jordan, Egypt and Iraq, and the joint economic projects agreed on through this mechanism, including electric connectivity projects. They also stressed the importance of joint projects between members of the Gulf Cooperation Council and Iraq in the fields of electric connectivity and transportation, as well as other regional projects that contribute to economic integration, development, and building bridges with global markets, while reflecting positively on the entire region.

In addition, the participants stressed that holding a conference in its second round underlines keenness on supporting Iraq's central in expanding regional economic cooperation and building bridges of dialogue to end tensions and establish cooperation regional relations of mutual benefits. The participants also reaffirmed that achieving economic development and succeeding in regional cooperation projects require building constructive regional ties on the basis of good neighbourliness and non-intervention in the internal affairs of states, as well as respecting international law, and cooperating in maintaining security and stability, countering terrorism, and achieving prosperity.

The participants reviewed the ramifications of regional and international crises on Iraq and the region, stressing that overcoming these crises requires comprehensive regional cooperation, and serious and efficient economic and political approaches that serve mutual interests, support the development process in Iraq, and contribute to regional development.

Furthermore, the participants stressed the importance of holding the third round of the conference, which was launched through Iraqi-French organization, with the participation of the Hashemite Kingdom of Jordan, the United Arab Emirates, the Islamic Republic of Iran, the Kingdom of Bahrain, the Republic of Türkiye, the Kingdom of Saudi Arabia, the Sultanate of Oman, the State of Qatar, the State of Kuwait, the League of Arab States, the Organization of Islamic Cooperation, the Gulf Cooperation Council, the United Nations, and the European Union. The participants agreed to hold the third round of the conference next year, on a date and in a location to be determined through consultations among them.

The Hashemite Kingdom of Jordan expressed appreciation for the active participation of heads of Arab and friendly states, in addition to foreign ministers and representatives of regional and international organizations, welcoming the genuine keenness to bolster cooperation in light of challenges that have made joint systematic action an urgent necessity for safeguarding mutual interests, and an efficient means towards fulfilling the aspirations of peoples to build a more secure, stable and prosperous future.