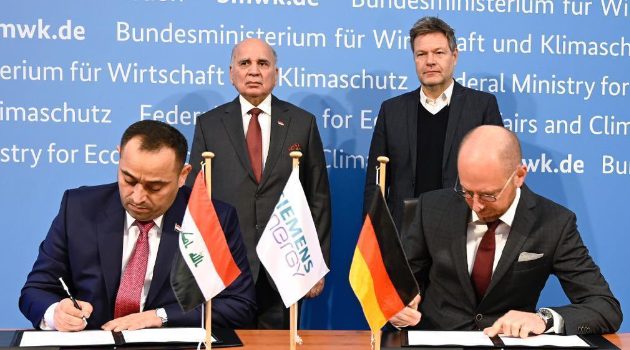 By Editor on 17th January 2023 in Iraq Industry & Trade News

The agreement was signed in Germany in the presence of Vice Chancellor Habeck and the Iraqi Deputy Prime Minister and Foreign Minister, H. Fuad Mohammed Hussein, and it will see Siemens Energy provide another 11 GW for local power generation.

"Iraq will invest heavily in its energy infrastructure in the coming years. Siemens Energy will play a key role in this development. I am pleased that renewable energies are used as far as possible. This is an immense contribution to a climate-friendly, sustainable and reliable energy supply in Iraq."

The list of projects includes projects for the development and improvement of power generation from conventional and renewable energies.

All turbines that are newly installed in power plants are fully H2-capable and can also be operated with hydrogen or its derivatives.

The Federal Government has classified this project as a strategic foreign project in the interest of the Federal Republic of Germany.