The Iraq Britain Business Council hosted its annual Cumberland Lodge Retreat on 6-8 July, inviting a host of political, business, academic and education experts to discuss the most pertinent issues relating to Iraq and its future.

The title of the conference was ‘Iraq: Domestic Expectations & Geopolitical Aspirations’ and addressed a variety of issues on regional politics, election diagnosis and the future of higher education in Iraq.

Session 2: Iraq in a Regional Perspective

On Saturday 7, an after dinner speech was given by Dr Mohammed Jasim, Library Director of Mosul University, who gave an impassioned presentation on the progress made in rebuilding the university’s dilapidated library. 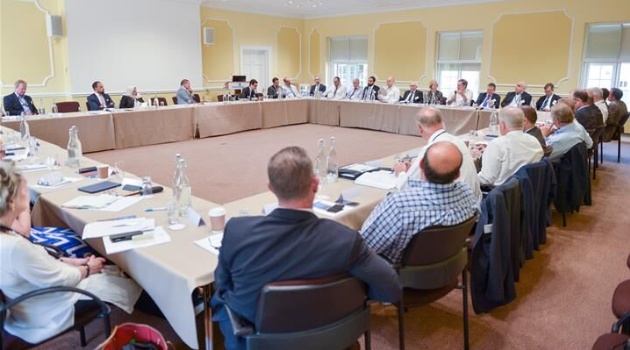 Petrofac has secured a new award and a number of contract extensions, with a combined value of more than US$110 million, for construction management, engineering, commissioning and start-up services for international oil company clients in Iraq.

Petrofac has been active in Iraq since 2010 and has developed a significant track record in delivering a range of onshore and offshore greenfield and brownfield projects, project management, engineering and consultancy, operations and maintenance and training services.

“The extension of our Iraq portfolio is part of our ongoing growth strategy. We continue to expand our service delivery in-country through the development of strong client relationships, whilst remaining competitive in a maturing market.

“These contract extensions and additional contract award from major international oil companies further enhance our position, where our focus remains on operational excellence, the development of local resources, and safe project execution.”

Shell has reportedly exited the Majnoon oilfield and handed over its operations to the Basra Oil Company (BOC).

Sources told Reuters that the handover was formalised on Wednesday, and that the process was "smooth".

According to the news agency, Anton Oilfield Services (AntonOil) and Petrofac will now operate the giant oilfield on behalf of the BOC, under a two-year contract; last month, KBR announced that it will has been awarded a contract for the development of the field.

Antonoil, Petrofac "to take over Majnoon from Shell"

Oil executives have told Reuters that the Iraqi Oil Ministry has signed a two-year contract with China's Anton Oilfield Services (Antonoil) and Petrofac to operate the giant Majnoon oilfield (pictured).

The companies will operate the oilfield on behalf of the state-owned Basra Oil Company (BOC), which will take over operations from Shell by the end of June.

Posted in Iraq Oil & Gas News Comments Off on Antonoil, Petrofac "to take over Majnoon from Shell"

The facility, which is responsible for a significant proportion of Iraq’s oil export, is located 60 kilometres (km) offshore the Al Fao Peninsula in Southern Iraq. It comprises a central metering and manifold platform and four Single Point Moorings (SPMs) which facilitate oil export onto awaiting crude carrier tankers.

In addition, Petrofac is responsible for almost 300 km of subsea pipelines,1800 metres of subsea hose infrastructure and a marine spread comprising 14 vessels.

“We are delighted to continue with our role in support of this key crude export facility. Since the start of our involvement in 2012, we have exported more than 2.2 billion barrels of oil while retaining an impeccable safety record. We have also remained focused on adding value for our client through the deployment of innovative and differentiated solutions.”

“Petrofac is a key partner for BOC. The team has supported us over the last five years to significantly increase export from the ICOEEP facility and we look forward to continuing our relationship into 2019.”

Petrofac has been awarded a contract, valued at around US$30 million, to undertake Project Management Consultancy (PMC) services for the Halfaya Contract Area (Halfaya) in southern Iraq.

Petrofac is responsible for managing and supervising the development and progress of several engineering, procurement and construction work scopes including: the central processing facility, power plant expansion, gas process plant and all associated facilities. For each work scope, activities will include the management of detailed design, procurement, construction and commissioning.

“This important award reflects our growing capabilities in a core market. Through the provision of PMC services, we are demonstrating our competence and capabilities to oversee large programmes of work. This builds upon our long track record for in-country execution for existing clients, through the delivery of engineering, operations, maintenance and training activities.

“We are pleased to have the opportunity to support PetroChina and the Halfaya partners in the delivery of this key infrastructure project. Our focus is to support sustained production, through the successful conclusion of each phase, towards the overall production plateau target of around 400,000 barrels per day.”

On Thursday 12th October a delegation of IBBC Members, led by Baroness Nicholson, Honorary President, met with H. E. Mr Asaad A., the recently appointed Governor of Basrah. The meeting took place in the Governor’s office, included a Lunch and lasted until the early evening.

The Governor presented his plans for Basrah and asked the company representatives how they could contribute to help achieve his ambitious objectives. IBBC members used the opportunity to introduce their companies and their services to the Governor and to participate in a wide ranging discussion with him.

Mr Rasmi Al Jabri, Deputy Chairman of IBBC, who facilitated the meeting was delighted with its many outcomes. He said that with Mr Edani at the helm of the Governorate the Province had a real chance to develop and modernise. He further commented that IBBC and all of its members stood ready to support Governor in his crucial work.

The meeting was also attended by Dr Ali Nasir and Phil Sherwood of the AMAR foundation.

Petrofac has secured a three-year master services agreement (MSA) to support Gazprom Neft Middle East B.V. with the provision of engineering services on a call-off basis for the Garmian field in the Kurdistan region of Iraq.

The MSA was secured following a competitive tendering process and augments Petrofac’s extensive footprint in Iraq, where it has been providing engineering, operations, maintenance and training services since 2010.

Gazprom Neft has been Operator of the Garmian field since early 2016. Through the provision of engineering services Petrofac aims to support the planned brownfield works to debottleneck and expand the Central Processing Facility (CPF).

“We are delighted Gazprom Neft has selected Petrofac as one of its key suppliers in support of the Garmian field CPF upgrade project.

“We have been working with this key client in Iraq for more than three years and hope to take this opportunity to build on our relationship through the demonstration of Petrofac’s fit-for-purpose and value-driven engineering solutions in the Kurdistan region.”

Petrofac’s scope of work includes the modification and application of an existing field design to meet the needs of the Nasiriya GTP, and an estimation for the engineering, procurement and construction (EPC) costs in line with the revised design requirements.

“This award is testament to our engineering design capabilities, as well as our deep understanding of the market and supply chain in Iraq. KOGAS is a new client for us in a core market and we look forward to further developing our relationship through the successful delivery of this scope.

“Throughout the project, we will provide a robust FEED package for the execution of the Nasiriya GTP in alignment with KOGAS’ expectations, to ensure that it can maximise the total value of the field.”

The Iraq Britain Business Council (IBBC) has announced that John M. Scott (pictured) will join as an oil and gas advisor to the industry sector membership.

John has over 40 year’s international experience in upstream project management and construction throughout Africa, Latin America, UK, USA and Middle East. As an engineer, John initially worked for Taylor Woodrow in the Arctic and in the North Sea for Global Engineering before joining Texaco to run R&D in the UK.

He subsequently transferred to the US to head up development of major greenfield projects in Latin American and West Africa, including re-instating a Brazilian rainforest as part of a carbon capture initiative. He returned to the UK to join Amec Foster Wheeler before joining Petrofac as Head of Project Development.

As a representative for Foster Wheeler, John has been involved with IBBC since its foundation and has twice chaired the Oil & Gas Sector Table, so brings exceptional knowledge to both IBBC and the membership.

It is reasonable to assume that John will focus on optimising the value of the IBBC network of companies and ensuring the business chain works to the benefit of the IOC’s, the E&C contractors and the SME groupings in the UK and Iraq.

Having managed many different factions in his work, John is a natural seeker of consensus and clarity of purpose among business communities. The industry sector can therefore look forward to great insights and support as IBBC optimises its Oil & Gas membership.