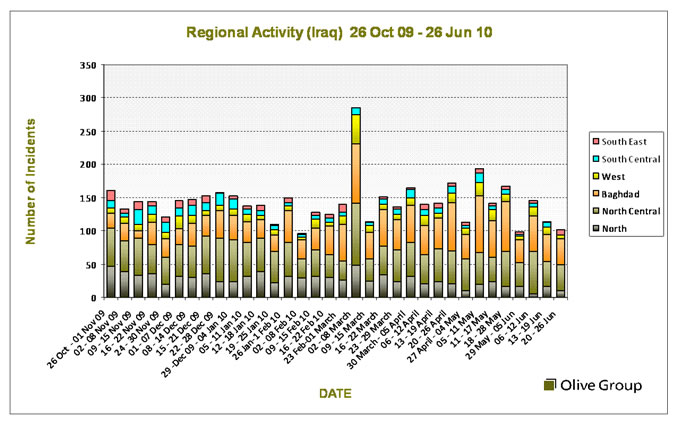 By adrianshaw on 1st July 2010 in Security, Weekly Security Update

There were 105 incidents reported nationally between 20 – 26 June showing a small decrease in the level of incidents from the previous week when 123 were officially reported. The number of Explosively Formed Projectiles used in that period dropped from eight to two, both of which occurred in Basra, targeting a Private Security Company and a United States Forces – Iraq patrol. In the review period, the north central region saw the most reported incidents, increasing slightly from 37 to 40. 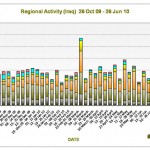 Iraqi Security Forces continue to develop despite the partial funding freeze imposed on security spending by the Ministry of Finance. Key challenges include the constrained Iraqi government budget; poor planning and procurement capacity and limited ministerial transparency and capability. Iraqi Security Forces do not show any signs of fracturing along ethnic or sectarian lines and continue to make progress in diversifying the composition of units.

An ongoing concern is the attempted disarmament of the Sons of Iraq militias (the Concerned Local Citizens). This issue is thought to be a serious risk to local security conditions in some parts of Baghdad, eastern Anbar, Babil, plus the provinces immediately north of Baghdad (Diyala and Salah al-Din). Though not a widespread phenomenon yet, there is potential for anti-government resistance to disarmament and a resultant shift of sympathies by Sunni militiamen back to anti-government forces.

When the new Iraqi parliament convened for the first time on 14 June, the session was left open in an attempt to procedurally stall the process of government formation. The move was choreographed by the core of the emergent “unity government” – Prime Minister Maliki’s bloc, the pan-Shiite Iraqi National Alliance and the Kurds.

The delay will provide these factions with more time to complete their negotiations regarding the prime ministerial position and the dispensation of ministerial portfolios. This gambit worked in 2006, when the opening session of parliament lasted for 60 days. When the session finally closed in May 2006, most of the issues had been agreed and the other milestones on the government formation track were met in quick succession. This is probably how the process will unfold this year as well. It may be difficult to complete all negotiations before the start of Ramadan around 11 August, making it possible that there will be no government before the time Ramadan ends in mid-September.

Prime Minister Maliki continues to seek re-nomination for the premiership through his Shia allies and the Kurds. His ostensible allies, the Iraqi National Alliance, continue to seek to unseat him and replace him with Iraqi National Alliance politician Adel Abd’al-Mahdi. Maliki’s strategy is to point to his cohesive bloc of 89 State of Law list members and his very high personal voting tally to highlight his credentials, whilst using his remaining time in government to offer inducements to potential allies and to string out the government formation process to outlast his adversaries.

Iyad Allawi’s Iraqiyya movement appears to be fragmenting and weakening, with elements entering into dialogue with Maliki and the Iraqi National Alliance over ministerial positions. Iraqiyya negotiators have agreed to participate in a “national partnership government.” Allawi’s group are unlikely to be an “insider” partner in the government, and will instead be splintered, with some elements falling outside the government and others given ministerial positions to buy them off.

On 29 June, Prime Minister Maliki and former Prime Minister Allawi met for a second time, though no further information was forthcoming as to the progress on the formation of the next government. It is in both parties interest to seek cooperation; for Maliki it could win back the confidence of the Sunni electorate thus giving his unity government more credence and for Allawi it could offer him proper inclusion in the government through the designation of key roles for him and other key Iraqiya members. However, the testing relationship between the two leaders could jeopardise any future deals.

The Islamic State of Iraq, an Iraqi offshoot of Al Qaeda, has claimed responsibility for the simultaneous double Vehicle Borne Improvised Explosive Device outside the Trade Bank of Iraq in the Mansur district. Open sources quoted a spokesman for the group mocking the weak security surrounding the area, suggesting that the bank was targeted in order to de-legitimise the government by demonstrating its inability to protect or maintain core services. A similar motive can be observed in recent attacks on electricity infrastructure across Iraq. The bank’s association with efforts to attract foreign investment are also thought made it an appealing target for insurgents who are vehemently opposed to such endeavours. 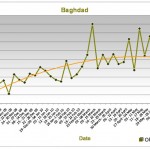 At Camp Taji the threat levels for kidnapping and Indirect Fire remained high in accordance with reports of insurgent movements near Taji. On 26 June an Indirect Fire Attack using 107mm rockets impacted four times on the base though no casualties were reported. The Iraqi Army Quick Response Force recovered four 107mm rockets and nine Improvised Rocket Launchers at the launching site south east from Taji.

No attacks were reported against Private Security Details and Route Irish and the International Zone and Baghdad airport did not witness any incidents. There were no officially recorded EFP attacks in the capital (although there was an ineffective Explosively Formed Projectile attack against USFI in the Abu Ghraib area). 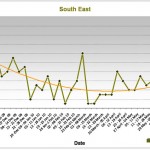 Local nationals continued to demonstrate against the government following on from last week’s protest about the dire lack of electricity. Security operations in the City were stepped up and the demonstrations passed without incident. These rallies could continue into next week, though they are likely to die down now that the resignation of the Electricity Minister, Karim Wahid, has been accepted.

Local reporting has stated that the Sadrist militia, the Mahdi Army, have been attempting to bring people onto the streets in protest against the government, although their efforts are proving unsuccessful at present. This move by the Sadrist militia is likely to be part of the wider political strategy to undermine Prime Minister Maliki and force him to stand aside.

US Forces and Iraq Security Forces and their associates will continue to be targeted by insurgent elements with Improvised Explosive Devices and Explosively Formed Projectile attacks on Main Supply Routes and Indirect Fire attacks against the Basra Contingency Operating Base.

The Business of Business is Business
Attack on Cash Convoy in Baghdad Thwarted
Tags: Security