By JohnDrake on 6th January 2011 in John Drake

Trends in 2010 demonstrated that violence is still a concern in Iraq. With opportunities for investment arising in 2011 the outlook for the country is fast improving, but companies looking to take part in Iraq’s economic redevelopment will have to take security into consideration if they are to succeed. 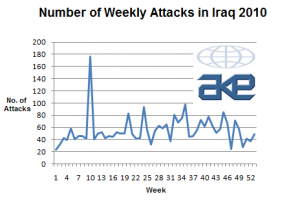 The above chart shows the weekly number of security incidents reported in the country last year. The most notable spike in attacks occurred in early March. A spate of attacks took place countrywide on 7 March as the nation went to the polls. Violence on the day was initially played down by the authorities, particularly the US military, and many of the attacks were low level in nature. Nonetheless, dozens of people were killed, reminding all in the country that militants still have the capability to conduct co-ordinated and devastating attacks, despite a massive surge in security measures around the date.

Since the election, the number of attacks continued to fluctuate, with a series of peaks and troughs throughout the rest of the year. This trend is likely to continue in 2011, as militants continue to receive support and new recruits from abroad. The police continue to gradually increase their capabilities, but they have suffered numerous setbacks, with repeated attacks on patrols, checkpoints and senior figures throughout the year. The US military is also expected to withdraw by the end of the year. 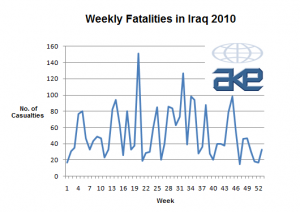 AKE’s weekly fatalities are displayed in the graph above. Attacks against Iraqi civilians also persisted in 2010 and Iraq Body Count documented at least 4,021 civilian fatalities. This constitutes a fall from the 4,680 recorded in 2009 but is still considered as an unacceptably high figure. The number of casualties declined gradually over the last few months of the year but total figures continue to fluctuate. Whilst conditions have greatly improved since 2008 and previous years, the frequency of attacks is still stubbornly high. 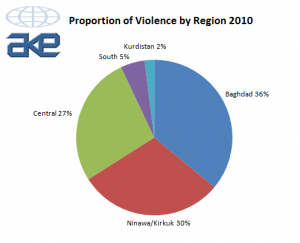 The above chart shows how much violence each region in Iraq experienced in 2010. By a considerable margin, Baghdad was the most hostile part of the country in 2010, accounting for 36 per cent of all violent incidents (an increase from the 32 per cent it accounted for in 2009). For such a small area of territory violence was particularly concentrated here. In comparison, the southern region of Iraq accounted for only five per cent of all violent incidents. This is a much larger geographical area and the trend bodes well for the numerous companies looking to establish a presence here. Provinces such as Muthanna saw virtually no attacks at all. Sporadic incidents continue to occur around Basrah and Amarah but with adequate security procedures foreign firms should be able to overcome the associated risks.

The northern provinces of Ninawa and Ta’mim remain amongst the country’s most hostile areas. Mosul, the capital of Ninawa province, can actually be considered one of the most hazardous cities in the world. The two provinces together accounted for 30 per cent of all violence in the country last year. This is an improvement from 2009 when together they accounted for over 40 per cent, and the disputed city of Kirkuk in Ta’mim province does appear to have experienced a tentative improvement in conditions. Nonetheless, all of this could come undone in the event that there is any serious debate over who should govern the ethnically mixed region. The outcome will, therefore, owe a lot to Iraqi politicians, and it is hoped that 2011 will be a year of agreement on political change rather than a protracted series of negotiations as was witnessed in 2010.