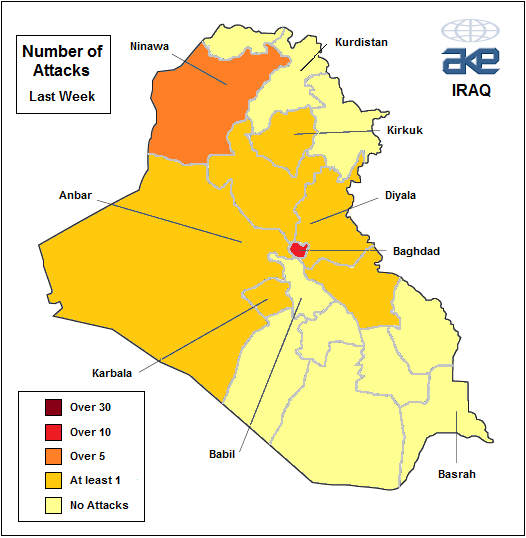 By JohnDrake on 2nd February 2011 in Weekly Security Update

Last week saw considerable violence in Iraq, particularly in Baghdad. There was also a spate of attacks in Mosul and two especially bloody bombings in Karbala. Over 100 fatalities and up to 250 injuries were recorded in total around the country. There was also an increase in targeted shootings in the capital, resuming a trend which appeared to have died for the duration of Arba’een. Two statements have also been made by official organisations over the security environment in the country. While one outlined the positive reduction in attacks on the oil sector in 2010, the other warned that the Iraqi security forces do not have the sufficient capacity to assume responsibility for security without US backing. While efforts to train and prepare the Iraqi police and military will likely increase this year there are concerns that a security gap will emerge after the 31 December US withdrawal deadline. It would be controversial and unpopular for Iraqi politicians to ask them to stay any longer, even if that did prevent a lapse in security.

Levels of violence have risen consistently but very slowly in the two northern provinces of Ninawa and Ta’mim over the last few weeks. The number of security incidents in the region still remains lower than the average seen in 2010. On 24 January an Iraqi contractor was reportedly kidnapped in Mosul and his whereabouts are not currently known. The week also saw two small scale attacks in the usually more quiet Ninawa districts of Ba’aj and Hamdaniyah, although Mosul city remains by far the most hazardous part of the north. Kirkuk and the wider province of Ta’mim continue to see relatively few incidents of violence. Iraqi Kurdistan also remains stable, with very little security concerns being reported in the region. However, personnel should expect possible demonstrations by supporters of the opposition Goran party who are likely to have been inspired by similar unrest in Egypt and Tunisia. The Goran party continues to call for political reform and a reduction of unemployment figures, particularly amongst the youth. As a result, many have sympathies for and similarities to those protesting in Cairo and Tunis. However, unlike many other political groups in Iraq, the Goran party does not have a militant wing of its own and is therefore much less likely to engage in acts of terrorism or militancy to advance its political agenda. Protests have descended into vandalism in the past, but incidents have tended to be highly infrequent and concentrated in small areas. The professional Kurdish security forces will likely be able to contain any unrest and the vast majority of business operations in the region will remain unaffected.

The central provinces experienced the tail-end of Arba’een violence last week. Two large bombings in Karbala left several people dead, while Baghdad saw a rise in the total number of attacks. The capital also saw a rise in the number of targeted shootings, which were directed against state employees and senior members of the security forces. This type of targeting began to rise in late 2010 but decreased in mid-January after the authorities went on a state of high alert and arrested several people suspected of involvement. It would appear that their efforts only had a temporal impact on the trend, and several more assassinations should be anticipated over the coming weeks. The most devastating bomb attack in the city last week took place in the north-western district of Shu’lah on 27 January, when a car bomb targeted a Shi’ah funeral, killing dozens and injuring over 100. The incident prompted a sporadic protest with survivors and local residents criticising the authorities for failing to protect them. Inspired by protesters elsewhere in the region, and potentially driven by a lack of jobs, services and electricity (especially in the summer) Iraq may see even more urban demonstrations over the course of 2011.

The southern region remains relatively quiet when compared to the rest of the country. There were no major incidents reported last week, apart from low level criminality and the arrest of several suspected offenders around Basrah province. AKE personnel on the ground report that security measures have been lessened at checkpoints on key routes. The lack of violence has likely prompted the authorities to direct their resources elsewhere. However, this leaves a potential vulnerability in the event that terrorists attempt to initiate more attacks further down the line. Mass casualty bombings are relatively infrequent in the southern cities, but they do occur. It would therefore appear that one of the greatest risks perhaps is complacency.