By JohnDrake on 16th February 2011 in John Drake

Iraq Business News has been shedding light on the investment climate in Iraq for a year. Over that period there have been numerous improvements in conditions. However, security has continued to play a major role in the business sector. Attacks and instability have persisted despite a significant reduction in overall violence in recent years. 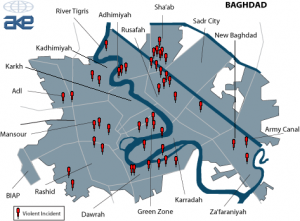 Violence in Baghdad on Election Day, 2010

In terms of security incidents and developments, several stand out over the past 12 months. The most poignant day of the year was arguably the 7th of March. A spate of attacks swept the country as citizens went to the polls to vote. Intimidation and a fear of violence caused many to doubt whether or not they should participate on the day, but by sunset a sea of hands waved ink-stained fingers in defiance of the country’s terrorist groups. Protesters today are demonstrating across the Middle East to demand an increase in reforms but Iraq already has many of these democratic standards in place. 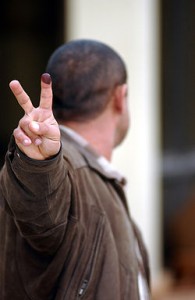 It took eight months for a government to be formed and many were concerned that terrorists would take advantage of the prolonged political vacuum by initiating attacks. However, these fears were not realised, with levels of violence fluctuating and eventually reducing towards the end of December. 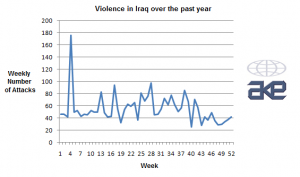 Weekly violence in Iraq over the past year

Fatality rates have continued to fluctuate, with peaks and troughs in the weekly figure. Fortunately there have been more troughs than peaks over recent months, although most weeks still see at least 20 fatalities which is still a high figure. Three weeks over the past year have seen more than 100 fatalities, with mass casualty attacks, often against large crowds of Shi’ah worshippers or members of the security forces remaining a tactic of choice for radical Islamist organisations. 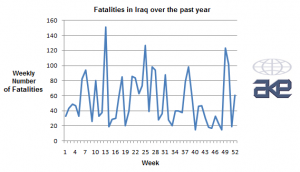 That said, the jihadist movements in the country have suffered a series of setbacks. Two senior al-Qaeda figures were killed in a counter-insurgency operation in Thar Thar (Salah ad-Din province) on the 19th of April. The deaths of Abu Ayub al-Masri and Abu Omar al-Baghdadi were confirmed by the US military using DNA testing and signalled a major blow to the Islamist movement in the central provinces. Two other al-Qaeda figures were captured in the same week, including the network’s Baghdad ruler, Manaf Abdulrahim al-Rawi (Abu Hayder), and Mahmoud Suleiman, the military commander of the organisation in Anbar province. A series of financiers and cell members were also rounded up or killed in operations throughout the rest of the year. Al-Qaeda remains a threat group of concern in Iraq but the last year is likely to prove somewhat of an annus horribilis for the organisation. 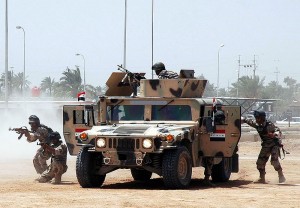 With tentative improvements in conditions, there is still uncertainty ahead. The US military is set to withdraw by the end of the year, raising fears of a possible security gap. Ethnic tensions continue to smoulder in the northern provinces of Ninawa, Ta’mim (Kirkuk) and parts of Diyala. Baghdad will remain the focus of political attention and will likely continue to suffer terrorist attacks. Crime may also become more of an issue, as the last phase of a (currently) dying insurgency, although ongoing improvements in the security forces will likely limit the risk. Finally, civil unrest and protestation may become more of a concern. For years many Iraqis were too scared to demonstrate. The expression of political will could result in murder, but now more and more are taking to the streets. With electricity shortages likely to intensify over the coming months the demands of the have-nots may become increasingly vocal. The authorities will have to exert extensive efforts if they are to appease protester demands. Evidently, democracy is no guarantee of stability. It is fragile and needs to be nurtured if it is to have a positive impact on a country’s security.

2 Responses to Iraqi Stability: A Year in Review