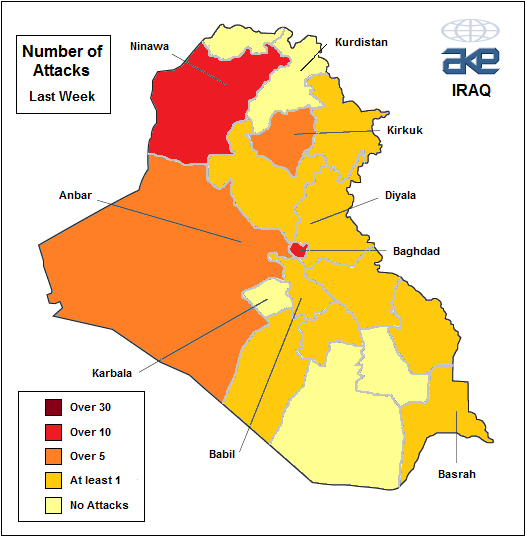 By JohnDrake on 6th April 2011 in Weekly Security Update

The past week has seen a slight drop in the number of violent attacks taking place in Iraq. Incidents were concentrated in Baghdad and in the districts west of the capital in Anbar province. Mosul also experienced a significant proportion of attacks, while even Sulaymaniyah in Kurdistan saw incidents of unrest and reported cross-border shelling by the Iranian military.

In Kurdistan the Iranian military is reported to have shelled isolated mountainous parts of the border in northern Sulaymaniyah province. Cross-border military operations by Turkey and Iran have regularly increased from mid-March (often coinciding with the festival of Nowruz). Incidents are likely to increase in frequency over the coming months but the impact on the majority of people and businesses in Kurdistan will remain limited.

Demonstrations in Kurdistan turned violent in Sulaymaniyah and the town of Kalar last week. The ongoing unrest is not having a major impact on business activities in the area, except for offices located immediately adjacent to the areas of protestation. Unrest in the wider region continues to harm investor confidence. However, Iraq is increasingly being viewed as one of the more politically stable parts of the Middle East, and companies with proper crisis management procedures will be at much lower risk of business interruption, physical damage and harm.

Security measures were heightened in Salah ad-Din province over the last few days in the aftermath of a horrific assault on a government building in Tikrit. The province was largely quiet as a result of the increased police presence. Violence was instead concentrated in Baghdad and eastern Anbar province.

There was a fall in the number of targeted shootings in the capital, which is a welcome development after a spate of targeted attacks the previous week, but roadside bombings and UVIEDs (Under Vehicle Improvised Explosive Devices or ‘sticky bombs’) were still used in attacks against civic employees and members of the Iraqi security forces. The city also saw a sharp rise in the number of indirect fire attacks (rockets and mortars) which hit a number of buildings around the city centre.  This type of tactic can be fairly inaccurate but it is nonetheless potentially destructive, posing an almost indiscriminate risk to personnel throughout the city centre.

Indirect fire also remains a prevalent tactic in the south of the country, with US military bases suffering the brunt of such attacks. Local threat groups remain intent on discrediting the foreign military presence in the country and US military convoys are also at risk of being targeted in roadside bombings. At least one of the roadside explosive attacks against a US military convoy over recent days involved an Explosively Formed Projectile (EFP) weapon. These can be deadly for armoured vehicles, given that they can pierce hardened undersides. Low-profile civilian interests are less at risk of being targeted but the region should certainly not be considered 'safe'.

One Response to Weekly Security Update for 6th April 2011