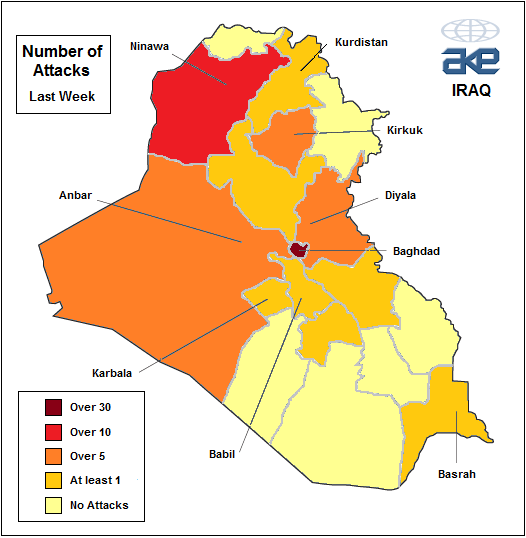 By JohnDrake on 11th May 2011 in Weekly Security Update

Levels of violence rose in Iraq over the past week, mainly in the centre of the country, throughout the capital, in the east of Anbar province and the west of Diyala province. Other hotspots included Mosul, Kirkuk, Diwaniyah, Hillah and even Karbala and Basrah. Kurdistan remained largely quiet, although the risk of unexploded ordnance was highlighted by a tragic landmine explosion that left several civilian casualties.

There has been a dampening of protests in Iraqi Kurdistan, although there is still a higher than normal number of security force personnel patrolling urban areas. The situation seems more militarised than normal but the region is still more secure than the rest of the country. A landmine explosion in the Suran district of Arbil province killed a civilian and injured three more on 3 May. Unexploded ordnance remains a risk in many isolated areas of the region, and while the incident does not signify a worsening of conditions it nonetheless highlights the fact that safety conditions are not entirely benign in the region. Personnel operating in isolated areas, particularly along the border, are advised to undergo minefield awareness training in advance of their travel.

The central provinces saw a rise in violence last week, with Baghdad seeing a particularly high number of assassination attempts. Incidents in the capital were concentrated in the downtown area of Karradah, Wahdah and Bab ash-Shaykh, as well as the southern district of Dourah. Beyond the capital there was also several attacks around Abu Ghraib and Fallujah to the west, and Ba'qubah in Diyala province. Meanwhile, al-Qaeda in Iraq has pledged its support for Egyptian cleric Ayman al-Zawahiri as the new leader of the global al-Qaeda movement. It also warned of reprisal attacks against the US, so American interests are advised to review their security measures in the country, particularly in the central region where the group presence is strongest.

Last week saw several indirect fire attacks (rockets and mortars) against US military interests in the south of Iraq. The Iraqi authorities responded with a number of investigative sweeps, finding several caches of weaponry in the process. Indirect fire attacks are likely to continue, posing an indiscriminate risk to personnel based in facilities otherwise considered secure. Roadside bombs also remain a concern, although they occur much less frequently in the south of the country than in the centre and non-Kurdistan north. Personnel seeking to minimise the risk of being targeted in a roadside attack are advised to travel low profile. Vary your routes and routines when you are travelling by road so that you make it harder for any would-be assailant to plan an attack against you.