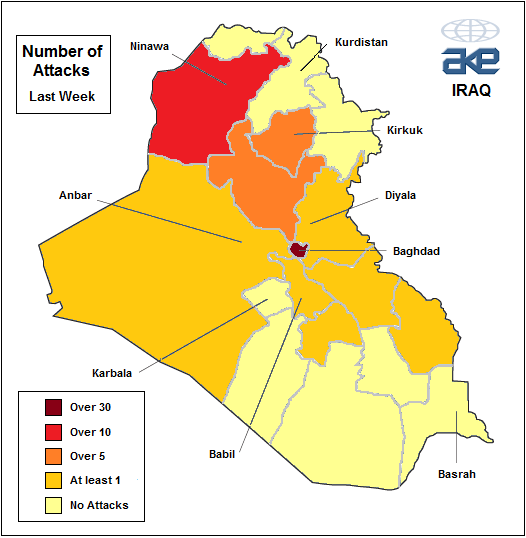 By JohnDrake on 18th May 2011 in Weekly Security Update

Levels of violence fell in Iraq last week, although there were still over 60 incidents recorded countrywide. There was a welcome fall in the number of casualties, and the week saw fewer fatalities than any recorded since February. Incidents were concentrated in Baghdad, which accounted for over half of all the attacks recorded countrywide. Mosul, Kirkuk and to a lesser extent Tikrit also saw a series of attacks. Kurdistan in the north remained very quiet, while the southern provinces saw only a handful of incidents.

Protests have largely died down in Kurdistan, and while there is still a heavier than normal security force presence in urban areas in the region, there has been a notable decline in the  violence and disruption associated with the protests. In the provinces of Ninawa and Ta'mim militant attacks continue - particularly against the police and Iraqi military, although last week saw a slight decline in the number of bombings recorded in the area. A young woman was also rescued by the police after having been kidnapped in Baghdad an unspecified time previously.

Violence in the region was concentrated in Baghdad last week, with a spate of attacks taking place in the downtown area of the city on the west bank of the river Tigris, as well as around the southern district of Dourah. Sporadic indirect fire (rockets and mortars) also left at least one person dead and 13 injured in several city centre locations. A spate of katyusha rockets hit the city on 15 May, with conflicting reports on the locations hit, and total number of casualties. AKE sources confirmed at least four separate attacks, with indications that the International/Green Zone and Rusafah areas were amongst those hit.  The majority of indirect fire attacks in the capital remain focused on the International/Green Zone but they are a highly inaccurate tactic. Even if they are focused on the city centre their trajectory often travels awry, hitting unintended targets, including densely inhabited civilian areas such as Rusafah, Karradah, Kindi, Karkh and Sa’adun. Otherwise, most of the central provinces actually saw a decline in violence last week. There was a handful of militant activity in Tikrit in Salah ad-Din province and a small number of attacks around Babil province, but the normally hostile provinces of Anbar and Diyala saw virtually no attacks.

The southern region remains far quieter than the centre and north of the country, although violent incidents continue to take place. A bomb targeting a US military patrol detonated in central Amarah (Maysan province) last week, while indirect fire targeted Camp Echo, the US military base near Diwaniyah (Qadissiyah province). No casualties were confirmed in either attack, although at least one eye witness was reported to have seen injuries as a result of the Amarah blast. There remains strong resentment to the US military presence in the south of the country, and US military interests remain the most common targets of militant attack.