Iraq’s oil wealth is massive, with significant economic potential for years to come. Unfortunately, development is being hampered by endemic violence and ongoing instability. However, the main reserves are not evenly distributed around the country and neither is the violence. By avoiding the violent hotspots companies can still make significant profits with minimal exposure to the risks posed by militancy and political upheaval. Instead of being deterred by regular headlines of death and destruction, companies should take a closer look at the country to assess exactly where the risk lies, and where the opportunities abound.

Some parts of the country have oil paucity and extensive violence. Anbar province, for example, has comparatively few hydrocarbon reserves, yet it sees attacks on an almost daily basis. On the other hand, some areas such as provinces in the south or those administered by the Kurdish Regional Government in the north, have extensive reserves and see virtually no violence. 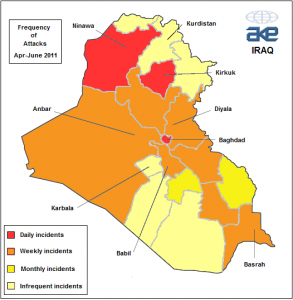 By comparing the oil wealth of each province with the number of attacks it sees on a regular basis, it would appear that Maysan province in the south of the country could be a particularly attractive investment location. Accounting for over 7% of the country’s oil wealth the province suffered less than 1% of all countrywide attacks recorded in the second quarter of 2011 (April – June). Neighbouring Basrah province saw between 2-3 attacks every week over the period, but with more than half of the country’s oil reserves it is no surprise that energy firms and numerous service companies are still flocking to the province and its significant potential.

Kurdistan in the north of the country is more of an established investment hotspot. As previously documented, conditions are very stable in the autonomous region, which accounts for at least 3% of the country’s oil, and more of its gas reserves. Conversely, the adjacent northern provinces of Ninawa and Ta’mim have over 15% of the country’s oil reserves between them, yet they experienced a quarter of the country’s violence in the second quarter. Ta’mim province currently sees an average of around eight attacks per week, while Ninawa province sees up to 12 and more so upstream oil and gas activity could be seen as more of a gamble in these areas. Companies operating here will have to take extensive measures to protect their assets and personnel – although business is certainly still possible in the two provinces.

Conditions seem even more punishing in the capital, which suffered more than 40% of all attacks recorded between April and June. The wider province accounts for just under 6% of the country’s oil reserves, and the violence must seem a daunting challenge to those looking to do business in the city. Nonetheless, Baghdad still houses the embassies and main political decision making bodies of the government, all of whom are involved in the oil and gas industry. Occasional trips at least will be required by companies looking to work in the country’s most important economic sector. 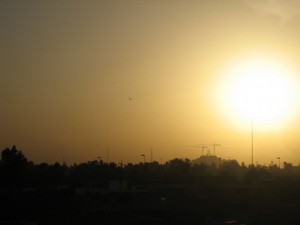 To reassure those that must, it is still perfectly possible to do business in the capital, and indeed all of the parts of the country which still see regular violence. With proper security procedures companies are able to overcome the many security obstacles presented in the country. Indeed industry considerations aside Baghdad remains a favourite destination of this author, who even without a military background, is still able to travel around the city in relative security.

AKE will be exhibiting at Offshore Europe in Aberdeen between the 6th and 8th September. Feel free to visit stand 5C110 where you can meet the author. If you would like to register to attend as an AKE guest for free please complete your details here.