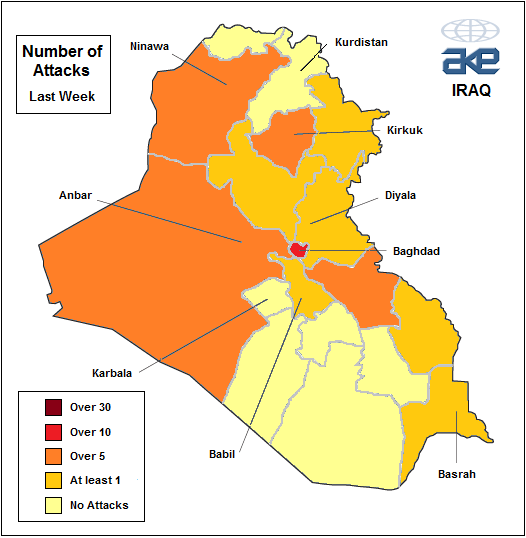 By JohnDrake on 17th August 2011 in Weekly Security Update

Up until Monday, the past week was turning into one of the quietest so far this year, but then a series of mass casualty attacks swept the country, leaving dozens of people dead and injured. Provincial government buildings and security force installations and patrols were the most common targets of the attacks, although civilians were caught up in many of the blasts. The most devastating attack took place in Kut, where two bombs in a central commercial area left over 30 people dead and over 60 injured. While several of the other attacks involved suicide bombers, they did not inflict nearly as many fatalities.

Incidents were scattered countrywide, and while many took place in Baghdad and the central provinces, there were also several incidents in the northern cities of Kirkuk and Mosul, and even some rare attacks in the southern holy cities of Karbala and Najaf, which are normally very well patrolled. Evidently terrorists still have the opportunity to overcome the security measures being maintained by the Iraqi authorities. 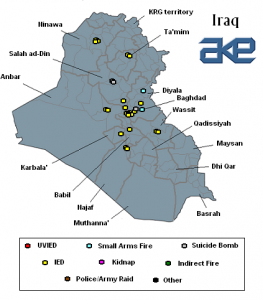 The attacks may re-invigorate the debate as to whether or not the US military should stay beyond the Status Of Forces Agreement (SOFA) deadline on 31 December. However, it would be extremely difficult for any Iraqi politician to invite the US to maintain its troop presence on Iraqi soil beyond the date. It is likely that the majority of American troops will have left the country by the end of the year, although some may stay behind to protect specific US assets and to provide support to the Iraqi security forces in a training and advisory role.

Apart from the mass casualty attacks of 15 August the month of Ramadan has remained relatively quiet. This is now a familiar pattern in the country, where the holy month has seen a decline in militant activity over recent years.

Kurdistan remains very quiet, with Iranian troops ending their pursuit of Kurdish terrorists – for now at least – in the Qandil Mountains. However, Ankara may resume its cross border attacks following a terrorist attack against troops in the south east of Turkey earlier on Wednesday. If it does, however, the fallout will remain limited to mountainous areas. Settlements, oil fields and areas of business activity will remain largely unaffected.

In the centre of the country recent violence has been concentrated in Baghdad, with clusters of incidents around eastern Anbar province, north-western Wassit province and scattered throughout Diyala and Babil provinces. The south of the country has seen very little in the way of violence over recent weeks, although Najaf was caught up in the mass casualty attacks of Monday. A double suicide bombing in the Hayy al-Hussein district of the holy city highlighted the fact that even normally quiet and well patrolled parts of the region are at risk of being targeted.

One Response to Weekly Security Update for 17th August 2011