By Editor on 7th September 2011 in Weekly Security Update

Levels of violence fell considerably in Iraq last week, with a drop by half in the number of incidents being reported from the previous week. Violence was concentrated in Baghdad and Mosul whereas there was an improvement in conditions in the provinces of Anbar, Diyala, Salah ad-Din and Ta’mim. The south of the country was quiet last week and while Kurdistan in the north remains stable there are ongoing military operations by Turkey and Iran along the border. 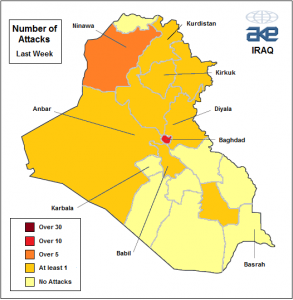 There were no kidnappings, suicide bombings or successful mortar attacks reported around the country last week, although companies and personnel should still expect occasional mass-casualty terrorist attacks in the country. Al-Qaeda’s local proxy group has warned that it intends to carry out several such attacks over the coming weeks. Furthermore, a would-be suicide bomber accidentally killed himself prior to conducting an attack in Diyala province earlier in the week, highlighting the fact that the risk of radical Islamist violence is still very much present in the country.

One concern is that shooting attacks appear to be on the rise once again, with a consecutive increase in small arms attacks being reported over the past four weeks. The tactic left at least 18 people dead and seven injured last week. Targeted assassinations against political figures, ministry employees and members of the Iraqi security forces were expected to increase following the conclusion of Ramadan at the end of Ramadan, and more such targeted killings should now be expected. Baghdad will likely remain the focus of such attacks but other high profile personnel elsewhere in the country should consider themselves at potential risk as well.

Iranian and Turkish attacks against Kurdish terrorists have increased over recent weeks and PKK attacks within Turkish territory are also likely to stoke further retaliatory action. However, the impact of these attacks will be limited to isolated mountainous areas along the border. The majority of personnel, business operations and contracts are not likely to be affected.

AKE will be exhibiting at Offshore Europe in Aberdeen between the 6th and 8th September. Feel free to visit stand 5C110 where you can meet the author.

One Response to Weekly Security Update for 8th September 2011