By JohnDrake on 9th November 2011 in Construction & Engineering In Iraq

Despite the occurrence of several high-profile attacks around the country, the overall number of violent incidents actually fell in Iraq last week. At least 58 people were killed and 168 injured in nationwide attacks, which is a high figure but still a decrease from the previous week’s total. Attacks were concentrated in Baghdad and Mosul, which has been the case for months now (as illustrated in recent AKE mapping). However, a less usual mass casualty attack targeting civilians in Basrah also left several people dead and dozens injured.

North
There were no major Turkish military operations reported in the Qandil Mountains last week and cross-border activity in general may now go into decline as winter weather conditions begin to set in around the mountains. Further south, two university professors and a Turkmen child were abducted in separate incidents in Kirkuk, highlighting the ongoing targeting of professionals, minority groups and children affiliated with both groups. Otherwise the majority of violence in the non-Kurdish administered north continues to take place in the city of Mosul. 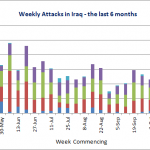 Baghdad
Security measures remain heightened amid the Baghdad International Fair and following the ‘Eid al-Adha holiday. However, they are evidently not exhaustive enough to prevent attacks from taking place. Indeed terrorists appear to have planned high-profile attacks to specifically coincide with the period. In Shurjah district in central Baghdad three bombs killed up to 10 people and injured 19 more on 6 November. The attacks targeted a busy market and were likely aimed at discrediting the government and shaking faith in the security forces.

Central
Beyond the capital levels of violence fell in the central provinces over the past week, but the Sahwah movement (Awakening Councils) continue to suffer bloody attacks, particularly in Diyala and Salah ad-Din provinces. A double suicide bombing in Diyala province left 10 people dead and 40 injured. There has also been a rise in the number of secondary attacks in the central provinces, including Baghdad, over the past week. Bear in mind that in the event of any single attack there is a risk that militants may be waiting in the area to conduct a follow-on attack in order to cause maximum casualties amongst the first responders on the scene, usually medical workers, the police, military or journalists, all of whom constitute potentially attractive ideological targets.

The South
On 2 November three bombs detonated in Basrah killing several people and injuring dozens. No claim for responsibility has been made but the assailants may have been Sunni Islamists intent on terrorising local predominantly Shi’ah civilians. Personnel should remain vigilant against the risk of targeted killings and occasional mass casualty attacks targeting civilians and the security forces in the south, although the region remains far quieter than the centre and north of the country.