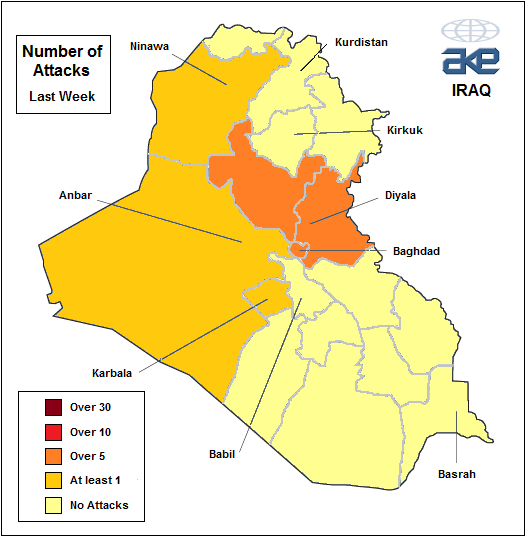 By JohnDrake on 17th November 2011 in Weekly Security Update

Last week saw a notable decline in attacks in Iraq, but incidents have worsened once again over the past three days. Activity was concentrated in the central provinces, although Baghdad itself remained unusually quiet until Sunday. Conditions now appear to be returning to an unfortunate level of normality. Roadside bombings are currently the most commonly occurring risk, with a gradual decline in shooting attacks over the past three months. Targeted assassinations are ongoing, particularly against the police, but ministry employees are not currently being murdered at the same rate as earlier in the year. Kidnap for ransom remains an issue, with at least two people abducted over the past week, including a child freed by the authorities in Karbala, and a government employee who remains missing in Ta’mim province.

North
Like many other parts of the country, Mosul was quieter than normal last week, although a spate of attacks against local mayors and the police over the past few days appears to signify that the lull in activity has been temporary only. There were no incidents recorded in Kirkuk last week, but conditions remain tense, with ongoing concerns over the long-term prospects for the divided city now that US military forces are withdrawing. Kurdistan remains stable, and while there was at least one cross-border military operation by Turkey last week, it took place in a relatively isolated area. Activity is now likely to go into decline until March, with fighting conditions very difficult as snow covers more and more of the Qandil Mountains. 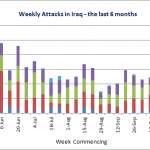 Centre
The most hazardous part of the country is currently the central provinces. Incidents remain concentrated in eastern Anbar province, western Diyala province and southern Salah ad-Din province. While Baghdad was quiet last week, conditions have started to worsen once again. On 13 November a child was abducted by criminals in the normally quiet and relatively well defended province of Karbala. However, the police intervened and managed to free the victim within a few hours, arresting the assailants. Children remain an attractive target for kidnap gangs as they tend to evoke a strong response, not just from their immediate family, but from extended family members and even the wider community who in the past have raised the necessary sum to ensure their release.

South
There were no major incidents recorded in the south of Iraq last week. Conditions remain far more quiet than the central and northern provinces, although this should not be taken as grounds for any complacency. Gaps in security persist and determined terrorist organisations intent on conducting attacks in the region will still be able to do so. Security is likely to become gradually more heightened over the coming two weeks ahead of a notable conference due to take place in Basrah city. The authorities will not want to take any chances as a variety of business travellers prepare to visit the city. Delegates who have any questions about the security environment ahead of the event please contact the AKE Iraq office.